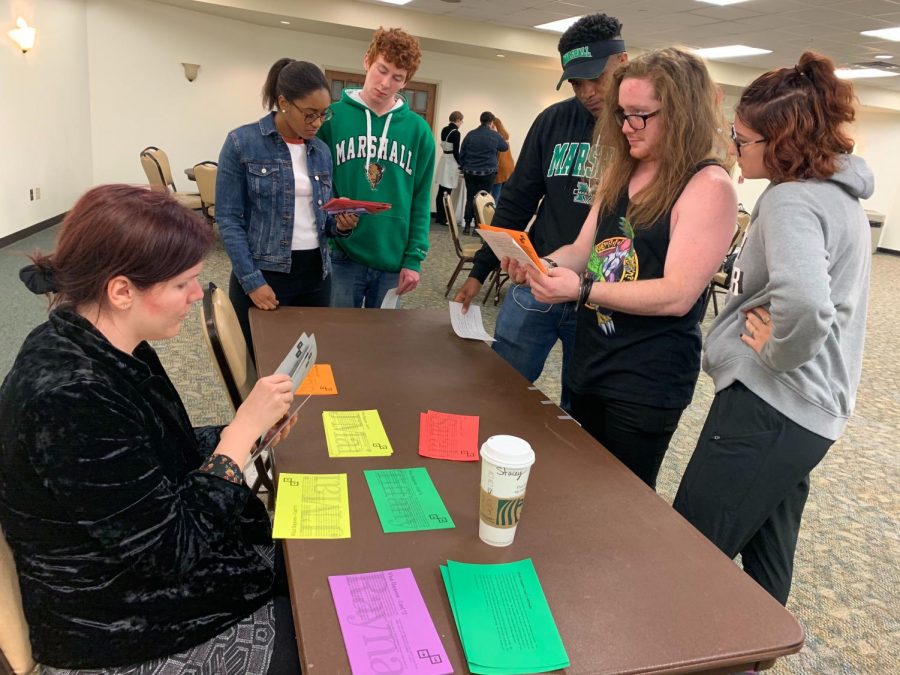 Students at the In Their Shoes event read options in a simulator experience that detail realities of domestic violence.

Students had the opportunity to participate in an interactive simulation that follows the story of someone struggling with a domestic violence situation in honor of Domestic Violence Awareness Month.

“The main goal is for students to build empathy and learn a little bit about what individuals experiencing domestic violence or abuse might go through,” Snyder said. “And hopefully, we can motivate student to be engaged in their communities and get involved with supporting victims and survivors.”

During the simulation, students followed choose-your-own-path cards which guided them through hypothetical interactions with different resources victims of domestic violence may use. Students such as sophomore biology major Aria Searles took part in the simulation and said she found the event eye-opening and informative.

“I kind of freaked out when I was reading the scenario I had and I got really sad,” Searles said. “I just realized that people deal with this all of the time and they want to get help, but it isn’t always that simple. Sometimes people aren’t willing to help, or there are certain rules and guidelines that they have to follow that prevents them from getting the help they need.”

After the simulation, students were able to grab a bite to eat and participate in an advocate-led debriefing session to discuss any thoughts or ideas that came up while doing the simulation. The debriefing session was used to help students process everything they had just learned, according to Sara Blevins, director of development at Branches Domestic Violence Shelter.

“We don’t want to leave someone hanging, so we do a debrief with an actual advocate that has worked with victims,” Blevins said. “That gives students a new perspective to the things they experienced in the activity.”

Branches Domestic Violence Shelter created the simulation, and this is the second year the Women’s and Gender Center has partnered with them to put on this event. Blevins said she believes reaching college students is important because it is a significant time in someone’s life, and their voice is needed.

“By putting on this event with Marshall and the Women’s and Gender Center, we have the opportunity to reach students around the time where they are making decisions about the causes that they are going to stand for, and figuring out who they are,” Blevins said.

Branches Domestic Violence Shelter serves five counties and is the first domestic violence shelter in West Virginia to open a second location. They now have one shelter in Cabell County and another in Putnam County. Last year, Branches served roughly 155 people in the shelter, but that is only part of the services that they offer, according to Blevins.

Branches offers a 24/7 hotline that is completely confidential.  Everything Branches does is free of charge, and they are open to all.

Julianna Everly can be contacted at [email protected]