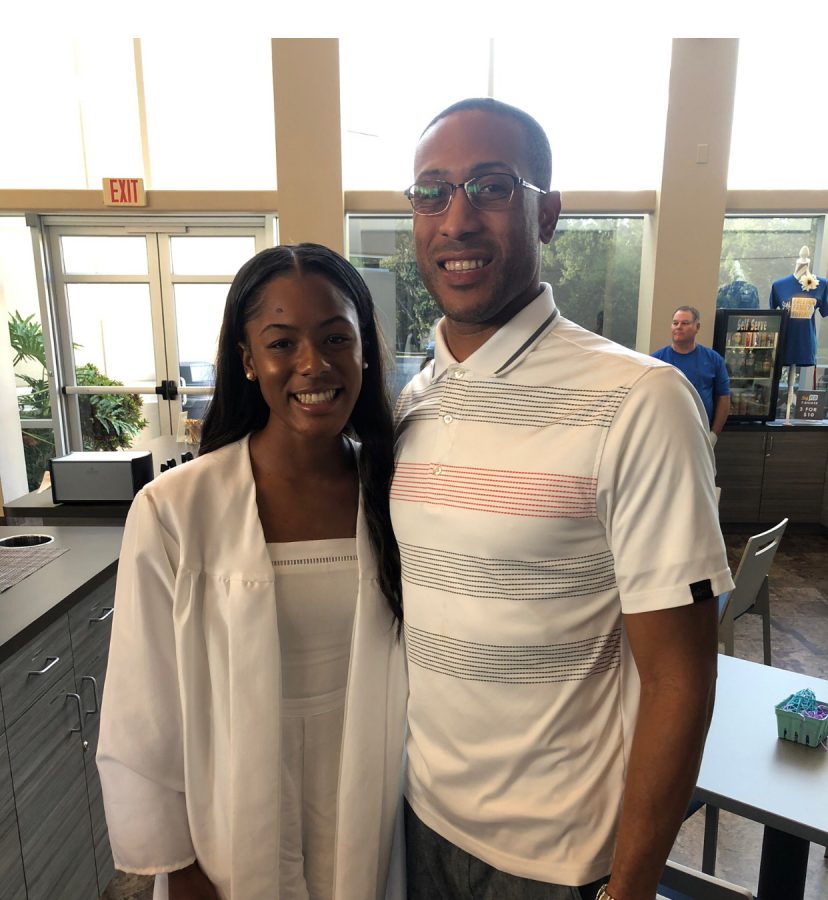 “Even though my intentions weren’t to come here,” Astoria Beckett said, “I think it’s kind of cool I followed my parents’ footsteps and managed to go to the same college as them.”

She follows the footsteps of a father who was a part of Marshall football’s most successful four-year class in history, in which they compiled a 50-4 record.

“It was interesting,” he said. “I haven’t sat in the stands many times, so it was a different perspective. It was good to be back.”

While on campus, he was also able to see a lot of the new construction and upgrades that have taken place through the years.

“I think the student experience is much better,” Rogers Beckett said. “I think they’ve done a great job investing into that. It’s definitely a great sight to see.”

The facility upgrades not only impressed him, but Astoria Beckett said they impressed her as well and were one of the many reasons she chose to come to Marshall.

Other than the fact that it is her parents’ alma mater, Astoria Beckett said she also really liked the coaching staff, and it ended up being her best financial option.

In the mid 1990s when Rogers was deciding on his school destination, he said he chose Marshall partly because they were the “cream of the crop of their division” and it was a “change of pace.”

Though there were many reasons that both father and daughter said they chose to attend Marshall, but one  held true in 1996 and today: the welcoming atmosphere and the friendly people.

“I think it provided a great atmosphere and environment for me to gain independence,” Rogers Beckett said.

Because that atmosphere was still present all these years later, Rogers Beckett said he felt comfortable with Marshall’s environment, making it easy having his daughter at a home away from home.

“Marshall showed that they are willing to invest into her education as well as her athletic skills and abilities,” he said.

So far, Astoria Beckett said she has enjoyed everything but the humidity, while her favorite part has been the training.

“It’s definitely different from high school,” Astoria Beckett said. “But it’s cool to say, ‘I’m a collegiate athlete and going to a DI school.’ I think that’s pretty amazing because not everyone gets that opportunity.”

The opportunity is one that both father and daughter share, and Rogers Beckett said he hopes his daughter will be able have some of the same experiences at Marshall that he did.

“I’ve met numerous families and alumni, and gotten to know them on an off the field and in and out of the classroom,” Rogers Beckett said. “I believe that’s one thing it (Marshall) has to offer Astoria as well.”

As a part of the Marshall team, Rogers Beckett was a first team All-MAC player in 1998 and 1999 and a Marshall team captain in the 1999 season. He also served as vice president of the Student Government Association for the 1999-2000 school year.

Rogers Beckett was drafted in the second round of the 2000 NFL Draft to the San Diego Chargers and went on to play for the Cincinnati Bengals in 2003. Once he was no longer able to play in the NFL, Rogers Beckett returned to Marshall in 2005 to finish his master’s degree, which he had started during his senior year, he said.

After graduating, Rogers Beckett he moved back to Apopka, Florida where he was born and raised to use his degree for urban development and city planning.