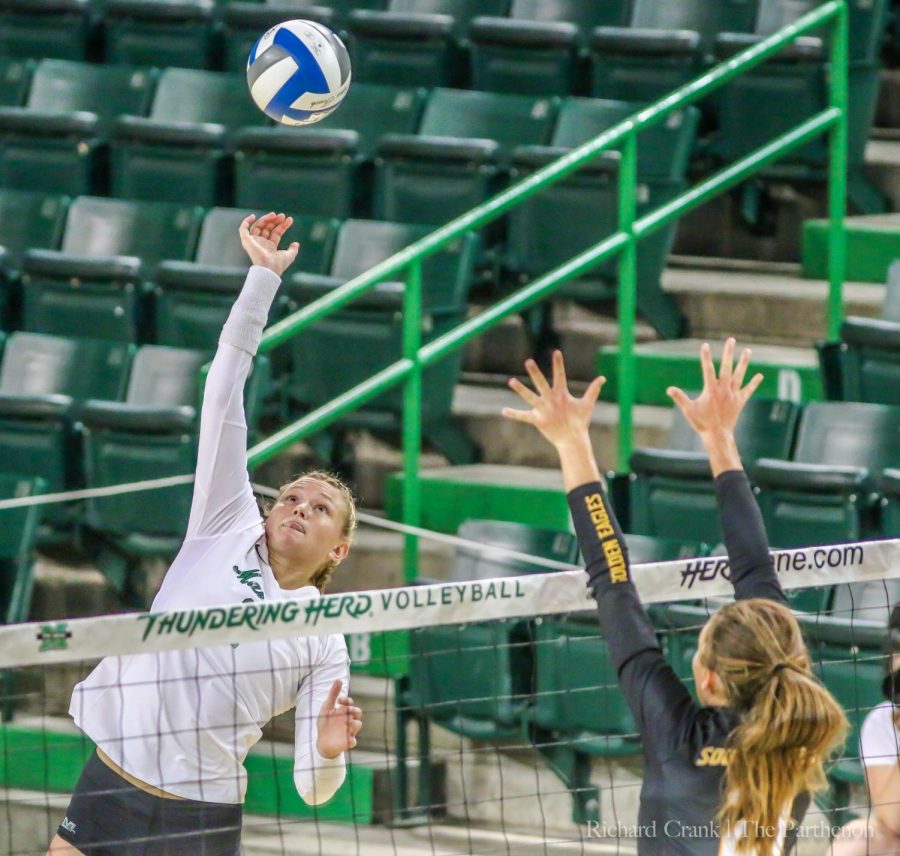 Ciara DeBell swings against Southern Miss in the 3-0 sweep on Sept. 27

After starting conference play 2-0, the Marshall University volleyball team will hit the road this week to battle the Charlotte 49ers and the Western Kentucky Hilltoppers.

The Herd is coming off of a sweep against Southern Mississippi and a 3-1 win against Florida International University.

Marshall (11-4) has had a solid start to the season only collecting four losses, all four of which were non-conference.  Only trailing Rice, Marshall sits in second place for Conference USA.

Friday, the Herd travels to Charlotte, North Carolina to face the 49ers (10-7). Charlotte is ranked seventh in C-USA.

Charlotte started conference play with a 0-3 loss to UTSA but bounced back beating Middle Tennessee 3-1. Earlier in Charlotte’s season they beat Eastern Kentucky 3-1 which Marshall swept weeks ago.

Garcia seems to  be a threat up against the Herd blocking and hitting. Marshall has climbed the charts and currently sits in fourth place in the NCAA Division I standings for blocks per set, just .22 points behind Utah. Sophomore middle Isa Dostal and junior middle blocker Destiny Leon are both individually ranked in blocks per set.  Dostal sits in 12th place, .01 behind 11th. Leon is ranked 26th.

Days later the Herd will travel to Bowling Green, Kentucky to face the Hilltoppers, who are on an 11 win streak.

WKU is (15-1) with one C-USA win over Southern Mississippi.

The Hilltoppers have had a conference player of the week every week this season.

Sophomore middle hitter Lauren Matthews was named Co-Offensive Player of the Week, three weeks into the season. She had a season high 22 kills against Northern Kentucky.

Senior right side Sophia Cerino was named Defensive Player of he Week, Sept 9th. Cerino tallied 23 kills, 11 blocks, 10 aces, six digs and five asisst the weekend before she was given the honor.

Junior setter Nadia Dieudonne and freshman outside hitter Paige Briggs are the duo to keep an eye out for. Both student athletes have received Conference Player of the Week honors three times this season.

Dieudonne had 37 assist in WKU’s opening conference match up.

Briggs season highs include 18 kills vs Loyalo Chicago and 23 digs vs Northern Kentucky.