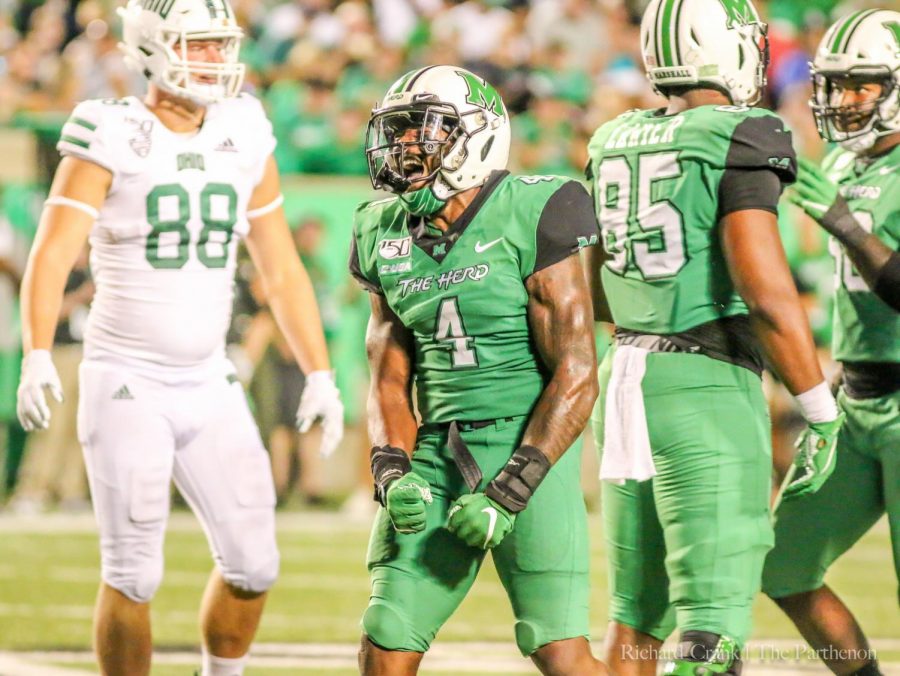 MU vs Ohio Football Game (Battle for the Bell)

The Herd’s goal to hoist the Conference-USA Championship trophy begins Saturday against Middle Tennessee to kick off conference play.

“We’re trying to start off 1-0 and come together as a team,” redshirt sophomore running back Brenden Knox said. “Conference play brings out the best in people and everything we want to achieve as a team is ahead of us.”

Marshall is coming off a tough loss of 52-14 against the Cincinnati Bearcats at the Joan C. Edwards Stadium in front of 32,000 fans.

The Herd (2-2) can treat the out of conference matchups as learning experiences to face in conference foes.

“Last week, we did not play to our expectations,” redshirt senior defensive lineman Marquis Couch said. “It was on our part, we have to lock down and buckle up and look at the mistakes and little things to improve.”

Middle Tennessee – similarly to Marshall – has faced challenging out of conference teams this season and is entering conference play with a 1-3 record. The Blue Raiders started off its season facing Michigan, who is now ranked 19th and lost 21-40, went on to play Duke and lost 18-41 and lost to the 14th team in the nation in Iowa with a score of 3-48.

MTSU’s sole win on the season was against Tennessee State when the Raiders sophomore quarterback Asher O’Hara completed 22-30 passes for 367 yards and four touchdowns.

“He has completed over 70 percent of his passes this season,” Head Coach Doc Holliday said. “He is not going to run out of bounds or slide. He is going to jump over people. All you have to do is turn on film of Michigan, Iowa or Duke and you can see that they all have a hard time tackling him, so that will be a challenge we have to deal with.”

“Unfortunately, the older receivers we have are not out there right now,” Holliday said. “The younger guys are going to have to accelerate their growth and go make plays.”

Kick off between the Blue Raiders and the Thundering Herd is set for 3:30 p.m. E.S.T. at Johnny “Red” Floyd Stadium in Murfreesboro, Tennessee, Saturday Oct. 5.