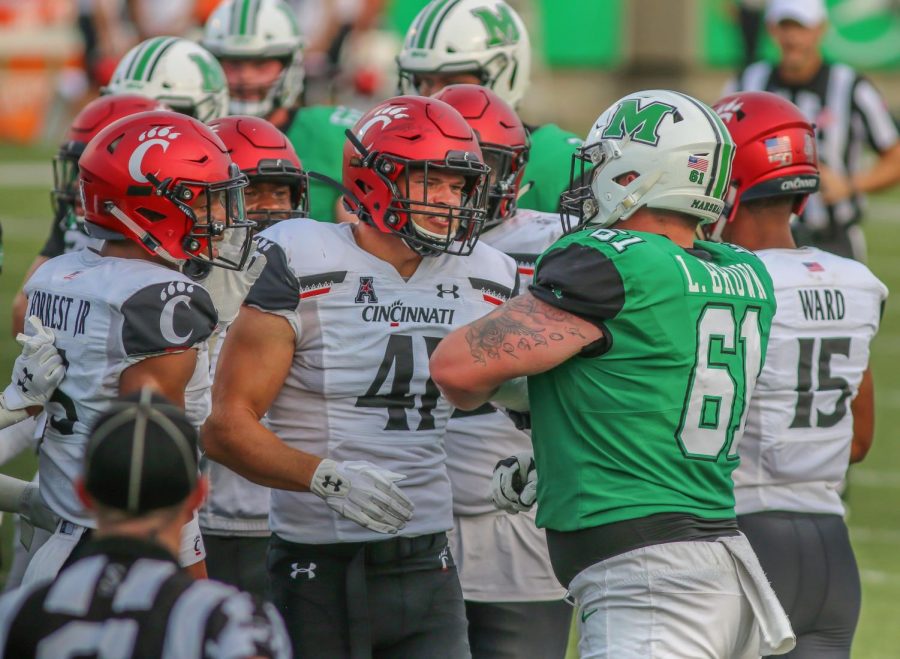 The Marshall University football team was handed its second loss of the season Saturday night when the University of Cincinnati put on a passing clinic to defeat the Herd 52-14.

The Bearcats (3-1) and sophomore quarterback Desmond Ridder came into the Joan C. Edwards Stadium and put on an offensive showcase while also handing the Herd (2-2) its largest loss in the season. Cincinnati had 525 total offensive yards throughout the game. Ridder threw for 221 yards alone and four touchdowns.

“They got good players and they hurt us with some tight end plays,” Marshall Head Coach Doc Holliday said. “We didn’t do a very good job defensively.”

The Bearcats did not slow down in the second quarter with the passing game. Ridder threw another touchdown pass, this time for 13-yards where it was caught by senior tight end Josiah Deguara. Cincinnati also got a rushing touchdown when Deguara punched it in from 2-yards out.

Ridder came out of halftime and threw a touchdown pass when junior tight end Bruno Labelle grabbed the 4-yard dump pass. Cincinnati also notched in a 32-yard field goal that was kicked by senior Sam Crosa. The Bearcats punched in another touchdown with just three seconds left in the third quarter when sophomore running back Tavion Thomas dove into the end zone from 1-yard out.

Marshall finally answered back with some points of its own when redshirt sophomore Sheldon Evans ran the ball in from 13-yards out. The Herd also had a 40-yard touchdown run by redshirt junior Willie Johnson. Cincinnati had the last laugh when sophomore Michael Kopaygarodsky ran it in up the middle for a 1-yard touchdown.

“We are going to put this loss behind us,” redshirt junior Nazeeh Johnson said. “This loss doesn’t define our season.”

Marshall falls to (2-2) on the season and will be traveling to Middle Tennessee next week to open up conference play.