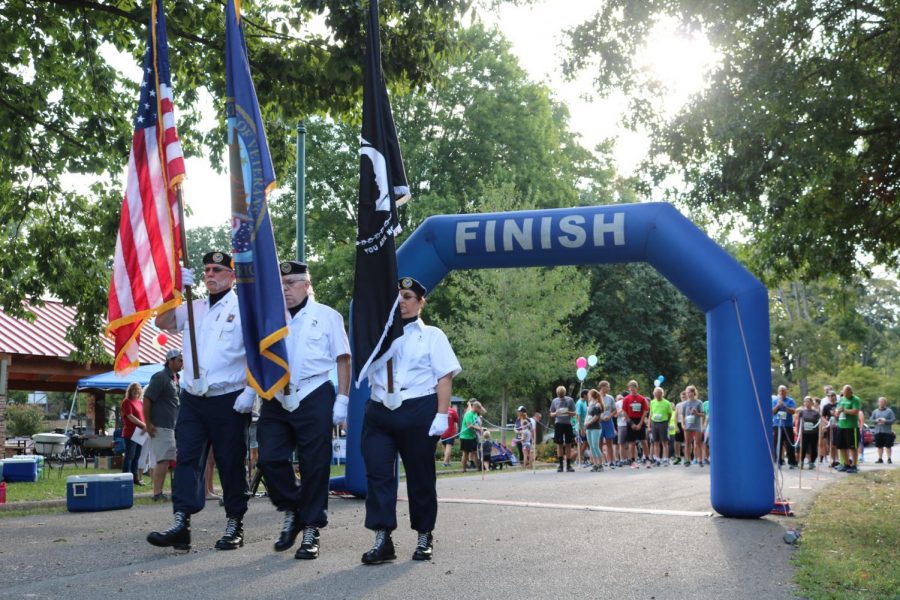 Veterans present the flags before the start of the VA Suicide Awareness and Prevention 5k race held in Ritter Park Saturday morning.

The Department of Veteran Affairs made it a top priority to combat the increase in veteran suicides, organizing their second annual VA Suicide Awareness and Prevention 5k race on Saturday morning in Ritter Park.

According to a 2016 report by the Department of Veterans Affairs, an average of 20 veterans commit suicide each day, with the number of suicides exceeding 6,000 each year between 2008 to 2016.

Belinda Jividen, a member of the West Virginia Gold Star Mothers who lost her son to suicide after his deployments to Iraq and Afghanistan, shared how she has reconciled with the death of her son.

“When it happens to you, you aren’t looking for signs, it just hits you in the heart,” Jividen said. “When my son first died, because of the stigma with suicide, I was almost ashamed in my grief, but that’s because people just don’t understand. When somebody dies of suicide they are in pain, they are in agony, and the only way they know to stop it is through suicide. They aren’t selfish. All they can think about is getting rid of that pain.”

Jividen’s son flew Medevac Black Hawk helicopters during his service, which are used for air assault, air cavalry and aeromedical evacuation units, and for the last two years of his life, he worked as a physician’s assistant in Liberia providing care for those affected by the Ebola crisis.

“I’m very proud of my son,” Jividen said. “His best friend told me one time, ‘He was a risk taker. He would land in places that nobody else would go because he wasn’t leaving anybody behind.’ That to me, is a hero, that to me is somebody who died for this country so we can enjoy the freedoms that we have now.”

Close to 150 people were registered to run in the VA 5k to show their support for veterans like Jividen’s son.

Brian Nimmo, director of the Hershel “Woody” Williams VA Medical Center, commented on how important it is to identify veterans who may be at risk to provide them with the proper care they need.

“One of our top priorities is identification, and that is what today is about,” Nimmo said. “Of the 20 veterans that commit suicide each day, about 14 of them do not even come to the VA, so it’s really a community responsibility to help identify these veterans who are struggling.”

Nimmo also talked about how important it is to make sure veterans know there are places which they can turn to for help, such as the VA crisis center, which does not require veterans to be enrolled with the VA in order to receive treatment.

“We are trying to get this information out in any place people are gathering to educate about how you can recognize if a veteran may be at risk,” Nimmo said. “If we can just get our hands on them, we can save a lot of lives.”

Rob Urban, U.S. Navy veteran, spoke on the issue of how veterans are treated in the United States, commenting on the government’s role in addressing issues such as suicide prevention.

“I feel that this government just throws them (veterans) out and casts them aside,” Urban said. “They don’t give them the treatment they deserve, whether it is for suicide, amputees or whatever, there are too many of them coming back and not getting proper care. For a country of this size to do that, it’s a shame.”

Laura Pritchard, U.S. Army veteran and a housekeeping member at the VA agreed with Urban’s comments, saying she hears stories on a daily basis in the VA medical center about veterans not receiving the care they deserve.

In the VA’s Annual National Veteran Suicide Prevention Report for 2019, the VA said suicide is a national issue that will require all of us to come together to “systematically address the larger societal issues that have fueled the increased rates of suicide.”

Community members such as Jividen, who dedicates her life to spreading awareness on the topic of suicide, said events like the VA’s 5k allow the public to openly communicate with one another about how the average citizen can combat the increased rates of suicide, not only for veterans, but for all of those who struggle with suicidal thoughts.

“This event is extremely important,” Jividen said. “It brings awareness to suicide, it makes people realize that there is prevention out there and it inspires everyone to find out the ways that they can help someone.” 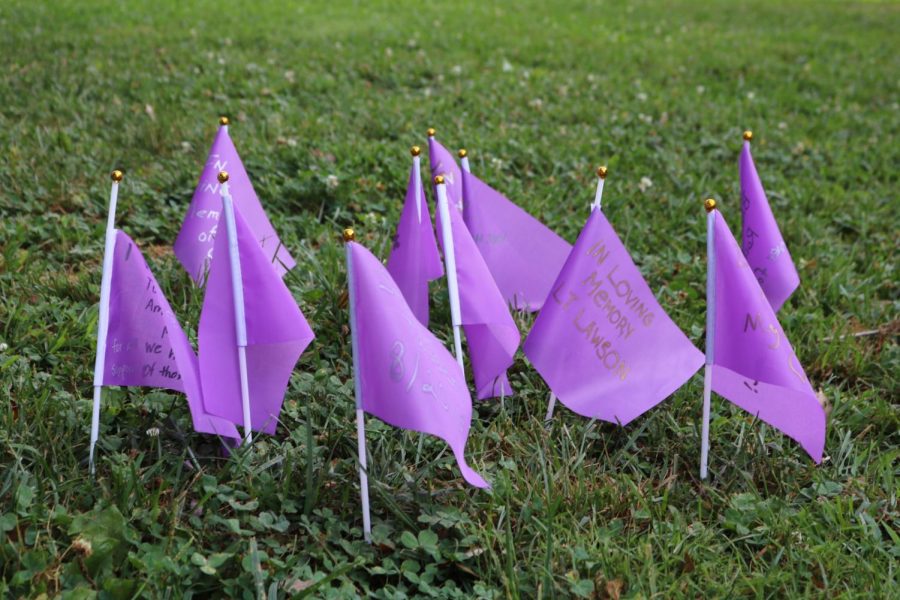 Blake NewhouseFlags with the names of veterans were displayed in Ritter Park in remembrance of those who have lost their lives to suicide.