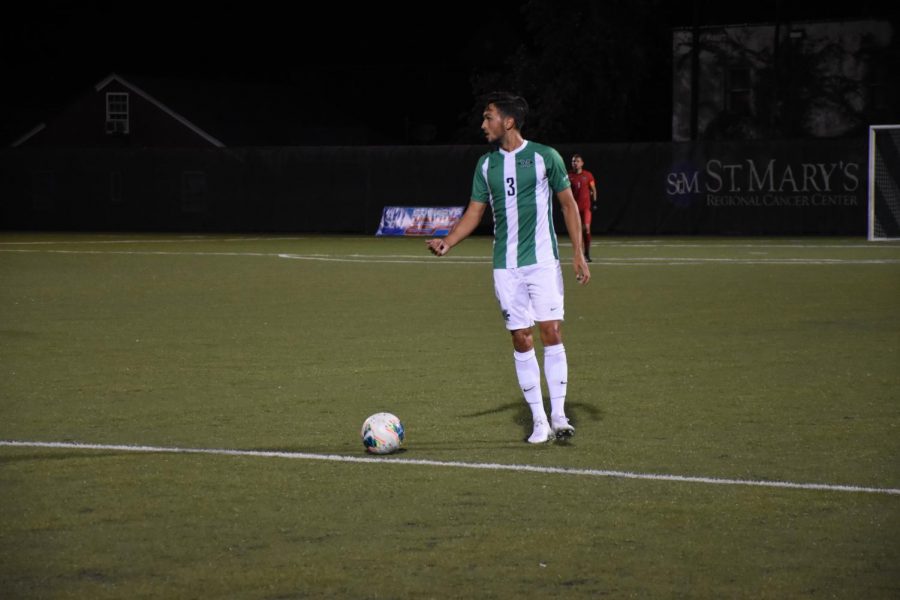 Carlos Diaz- Salcedo surveying the field before passing the ball.

The Marshall University Men’s soccer team suffered its first loss of the season on Tuesday night by losing 3-2 to the University of Texas Rio Grande Valley,

Tuesday night the Herd and the Vaqueros of UT-RGV met up on the soccer pitch for the first meeting between the two programs. The game was an extremely physical one with seven total yellow cards being issued within the game.

“I thought our guys did a tremendous job at the beginning of the game,” Herd head coach Chris Grassie said per Herd Zone. “I am proud of their performance. Obviously, they were playing against a lot of adversity, but our guys kept their heads and kept fighting until the very last minute. But there was a lot to be proud of for Thundering Herd soccer.”

The Herd jumped out to an early 1-0 lead when Sophomore Vinicius Fernandes nailed a header into the back of the net off the assist of Freshman Joao Souza.

The game started to get physical in the 18th minute when UT-RGVs Senior Arthur Rogers and Marshalls Freshman Max Schneider were both issued yellow cards for colliding into each other when going after the ball.

The Herd kept the lead going into Halftime but UT-RGV answered just 20 seconds into the 2nd half when Senior Kyle Edwards put one into the bottom right corner and from there the Vaqueros poured it onto the Herd.

UT-RGV scored its second goal of the night when Junior William Akio sent a rocket into the bottom left from 10-yards out. UT-RGV was issued a penalty kick in the 76th minute when Akio was knocked down inside the box. Akio sent the ball into the back of the net giving UT-RGV a 3-1 lead over the Herd.

Marshall answered back with a goal by Junior Jamil Roberts with just 1 second left making it 3-2 but was unable to make the comeback.

Marshall suffers its first loss of the season bringing its record to (4-1-1) while UT-RGV improves to (3-1-0). The Herd are back in action Sept. 21st when they take on Akron at Hoops Family Field in Huntington, 7 p.m.