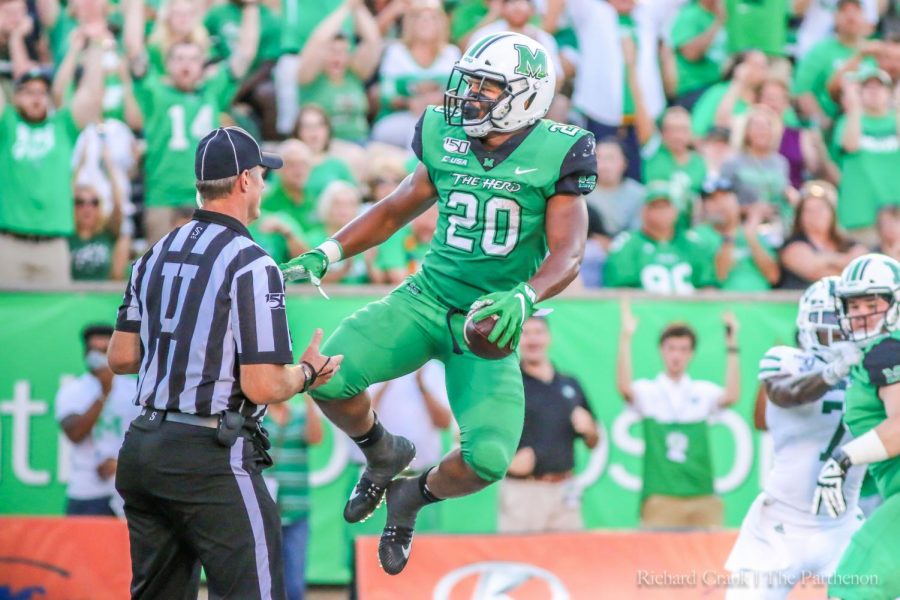 MU vs Ohio Football Game (Battle for the Bell)

The Marshall football team looks to take advantage of this week’s bye before facing a tough American Athletic Conference Cincinnati team in Huntington.

“I think in the past we’ve done a good job with bye weeks,” Head Coach Doc Holliday said. “The kids start getting beat down with the number of reps and I think having the opportunity to give them a couple of days off to refresh helps.”

The Thundering Herd are coming off two hard fought out-of-conference games – against now the 20th ranked Boise State Broncos and predicted preseason MAC champions the Ohio Bobcats – and players are looking forward to the open week as well.

“We just want to get everyone back to 100 percent healthy,” said redshirt sophomore quarterback Isaiah Green. “Obviously we get more time than usual to prepare for them (Cincinnati), so we want to take advantage of that.”

After coming off another standout performance with 53-yards and a touchdown receiving and 52-yards and another touchdown rushing, redshirt junior tight end Xavier Gaines is looking forward to get treatment.

“I don’t remember the last time we’ve had two days off,” Gaines said. “It gives my body a rest and it gives me the opportunity to go get treatment, so it is nice for me.”

Gaines, who was recruited to Marshall as a quarterback, has been a major contributor to the offense this season at the position of tight end. Gaines has accounted for three total touchdowns – two receiving and one rushing – and for 169 of total yards. Gaines’ ability to play multiple positions has caused opposing defensives problems this season and the options seem limitless as the Herd uses an extra week to prepare against Cincinnati.

With an extra week, senior wide receiver Obi Obialo is able to rehab without missing another game. Obi started all 13 games last season and finished the season with 42 reception for 505-yards and four touchdowns. Obialo has not played this season but Doc has said he will return at some point. Redshirt sophomore running back Brenden Knox did not play in the second half of the  Ohio game because of an injury and will look to benefit from the bye week according to Doc.

The Cincinnati Bearcats travel to Huntington to face the Marshall Thundering Herd on Sept. 28. at 5 p.m.