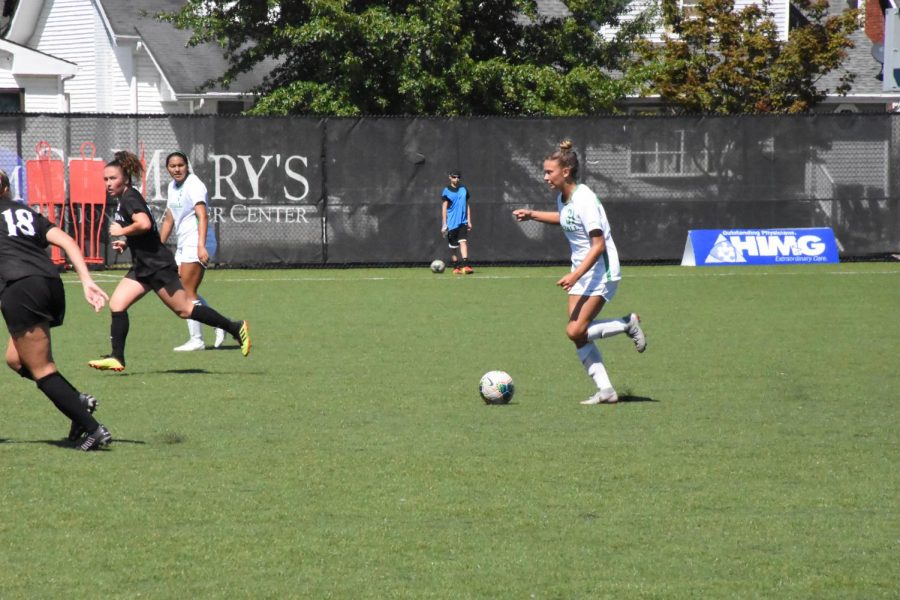 Molly Preston kicks the ball down the field for the Herd in its game against High Point on Sept. 15.

The Marshall University women’s soccer team won its second game of the season Sunday with a pair of goals by junior Mary Lawman.

“I thought that was probably the first time of the season we have seen complete effort on both sides of the ball, and it set a tone,” Head Coach Kevin Long said.

The Herd kicked off the game with a goal in the 17th minute by junior Molly Preston after a pass from junior Rene Ross.

Lawman turned it on for the Herd with her first header in the 27th minute after taking a pass from Ross, giving Marshall the 2-0 lead.

“It (headers) is kind of a key thing for me,” Lawman said. “I would rather have the ball at my head then at my feet.”

A penalty kick scored by Kyle Levesque put High Point on the board in the 40th minute, with Marshall keeping a 2-1 lead.

Not a minute later, Lawman took the ball headed by Metzti Gonzalez in the air and headed it into the goal, putting Marshall ahead 3-1. Lawman now has three goals on the season.

“To me, it always means a lot to score and get the win,” Lawman said after her two-goal game in the win. “However, without the team I have out there with me, it wouldn’t be possible.”

Goalkeeper Lauren Langley was just two saves shy of tying her career-high saves. She made three saves in the first half and six saves in the second half. She was also named Conference USA Goalkeeper of the Week for Sept. 16-22.

Her nine saves in regulation came after making a career-high 11 in a double overtime loss at No. 9 Vanderbilt last weekend.

“We scheduled such a difficult schedule this year,” Long said. “We think we are going to be contending for the Championship and to do that we want to make sure that we knew how better teams would expose us. We saw a distinct difference in where we were a year ago and where we are today. That is something that will prepare us better for Thursday.”

The Herd will be back in action Thursday, Sept. 19 to open conference play at FAU with first kick scheduled for 7 p.m.