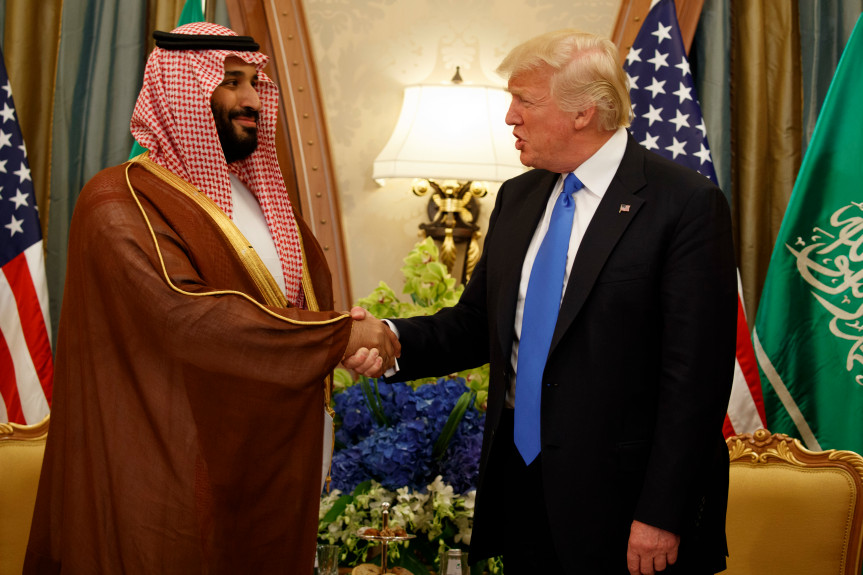 President Donald Trump, whose successful 2016 campaign revolved around the slogan “America First,” announced via Twitter on Sunday that American military forces are “locked and loaded […] waiting to hear from the Kingdom” specifics regarding when, where and how to initiate war with Iran.

Trump’s tweet came in response to news of Yemeni Houthi rebels’ drone attacks on Saudi Arabian oil fields, prompted by the Kingdom’s frequent horrific war crimes in Yemen, a situation that United Nations Secretary-General Antonio Guterres has described as “the world’s worst humanitarian crisis,” and throughout which the U.S. has been entirely complicit. Trump Administration officials have claimed Iran is likely responsible for the attacks.

While it is possible Iran is at least partially responsible for the attacks, the U.S. is certainly responsible as well for its complicit cowardice concerning the Saudi starving of tens of thousands of children, in addition to eight million civilians on the brink of starvation, and consistent bombings of homes, schools, weddings, hospitals, churches and elsewhere in Yemen. It is also certain Trump’s seemingly populist pleas before becoming president for politicians to invest in everyday Americans instead of wasting trillions of taxpayer dollars on endless wars the American people do not support were disingenuous and morally vapid.

Despite campaigning on consistent, unapologetic anti-interventionist rhetoric, since being elected, President Trump has frequently removed his faux-populist veil, revealing an all-too-familiar cowardice in failing to stand up to the Military Industrial Complex and hold accountable corrupt, violent leaders of foreign countries considered American allies.

As throughout the years-long humanitarian crisis in Yemen, for which Trump himself is partially responsible after vetoing a bipartisan bill to end American complicity in, the Trump Administration also sat by idly and obediently through Saudi Arabia’s murder and attempted cover-up of Washington Post columnist Jamal Khashoggi’s death and needlessly dropped out of the Iran Nuclear Deal, only furthering tensions and escalating toward more conflict in the region.

Last week, Trump seemed to attempt to reach out to the anti-interventionist sentiments of American voters, firing war hawk John Bolton from his national security adviser position, citing frequent disagreements with Bolton, presumably including Bolton’s endless attempts to instigate war with both Iran and Venezuela. However, shortly after, Trump tweeted: “In fact, my views on Venezuela, and especially Cuba, were far stronger than those of John Bolton. He was holding me back!” Reaffirming his lack of any serious anti-interventionist principles, just a week after firing him, Trump now seems poised to give Bolton the destructive, senseless war he wanted all along, all at the behest of a despotic dictator, reckless domestically and abroad, responsible for the deaths of countless innocent civilians in one of the Middle East’s poorest countries.

Regardless of one’s opinions regarding the Kingdom of Saudi Arabia, Donald Trump, the potential genocide in Yemen or the Iran Nuclear Deal, one truth remains clear: A war with Iran would likely be unimaginably disastrous for everyone involved.

As has been explained by Rep. Tulsi Gabbard of Hawaii, who served in combat in Iraq from 2004-2005 and recently missed out on weeks of campaigning for president while deployed to Antarctica: “A war with Iran would be far more costly and far more devastating than anything that we experienced in Iraq (…) It would essentially make the war in Iraq look like a cakewalk.”

Even if one disagrees with Gabbard’s assessment of a potential war with Iran, it is difficult to understand any serious argument that American soldiers—brothers, sisters, mothers, fathers, sons, daughters—should be sent oversees to fight senseless wars on the whim of an all-privileged, pampered prince fueled by the spilling of oil as his Kingdom attempts genocide on an infinitely less powerful people.

But such is precisely the problem: Trump, just like countless other American presidents and powerful politicians before him, is free to wage endless destructive wars because he, his family members and his closest confidants are free from any fears of ever suffering the sobering, sickening realities and consequences of the wars they’ve waged for poor people with less power to fight as mere pawns. President Trump knows working-class Americans have no interests in fighting depraved wars on behalf of foreign despotic dictators, but he simply doesn’t seem to care as he once appeared to.

In 2014, the year before his announcing a bid for the presidency, Trump tweeted, “Saudi Arabia should fight their own wars, which they won’t, or pay us an absolute fortune to protect them and their great wealth-$ trillion!”

If we take Trump, whose shady business dealings with the Kingdom have raised frequent questions and accusations of corruption and conflicts of interests, for his word (which, genuinely, maybe we shouldn’t), then perhaps he simply feels he has at last collected a sufficient fortune.

At a rally in 2015 shortly after announcing his bid for the presidency, Trump boasted, “I like the Saudis. I make a lot of money with them. They pay me millions,” and Monday at the White House, he remarked when questioned whether he had promised to protect Saudi Arabia, “They spend $400 billion in our country over the last number of years (…) Saudi Arabia pays cash.”

In a tweet Sunday directed at the president, Gabbard wrote: “Trump awaits instructions from his Saudi masters. Having our country act as Saudi Arabia’s bitch is not ‘America First.’”

Gabbard also noted the unconstitutionality of a president waging war without the approval of Congress.

“As a member of Congress and as a soldier, I and all my brothers and sisters in uniform have taken an oath to protect and defend the American people and the Constitution of the United States of America,” she said. “There is nothing in our Constitution that gives (the president) the power to go to war without the express consent of Congress.”