Herd faces Bobcats in the Battle for the Bell 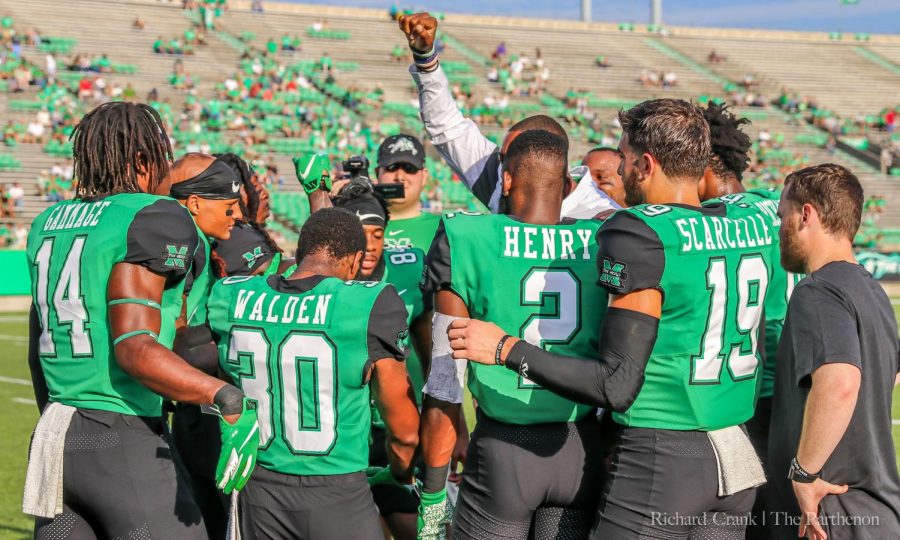 Members of the Marshall football team huddle together prior to the start of the game against VMI.

The Marshall University Thundering Herd (1-1, 0-0 Conference USA) will return to the Joan C. Edwards Stadium Saturday to face the Ohio University Bobcats (1-1, 0-0 Mid-American Conference) in the Battle for the Bell game.

This will mark the 60th time the two teams faced each other with the height of the rivalry going back to when Marshall was in the Mid-American Conference. The Herd and the Bobcats have not faced off since 2015 when Ohio edged Marshall 21-10 in Athens, Ohio.

The Herd and the Bobcats are both coming off losses, Marshall was defeated by Boise State 7-14 while Ohio lost to Pittsburgh 20-10, and both teams will look to get back on track.

After the Herd defense held the Boise State Broncos to 14 points last Saturday, it will face another challenge when All-MAC second team senior quarterback Nathan Rourke and the Bobcats travel to Huntington.

“They (Ohio) are picked to win the Mid-American Conference by their peers,” Head Football Coach Doc Holliday said. “If you talk about Ohio, you have to talk about the quarterback Rourke. He’s an excellent player that can beat you with his feet and can throw the ball extremely well and that is going to create a lot of problems for us defensively.”

Rourke will test the Herd with his feet and arm as he carried the ball ten times for 75-yards and a touchdown. He threw for 188-yards and two touchdowns in the Bobcats season opener against Rhode Island.

“We had a lot of opportunities to make plays that we missed,” Marshall redshirt sophomore quarterback Isaiah Green said. “This week I want us to focus on making those plays when the opportunities arise.”

Marshall, which did not account for a first down in the second half against Boise State, lost an offensive playmaker Saturday.

Marshall Athletics released a statement Monday that stated: “Thundering Herd running back Tyler King has been dismissed due to a violation of team rules and policies. The department will have no further comment regarding this matter.”

King had provided a steady supply of offense for the Herd in years past rushing for 820 yards and seven touchdowns and was selected to the All-Conference USA Freshman team in 2017.

“I feel good about the running back position,” Holliday said. “We like what Knox brings to the table and we have Sheldon Evans. It is these guys’ turn to step up and go make plays.”

The rivalry was recently extended between Ohio and Marshall with a home and home agreement between the programs that was announced earlier this month.