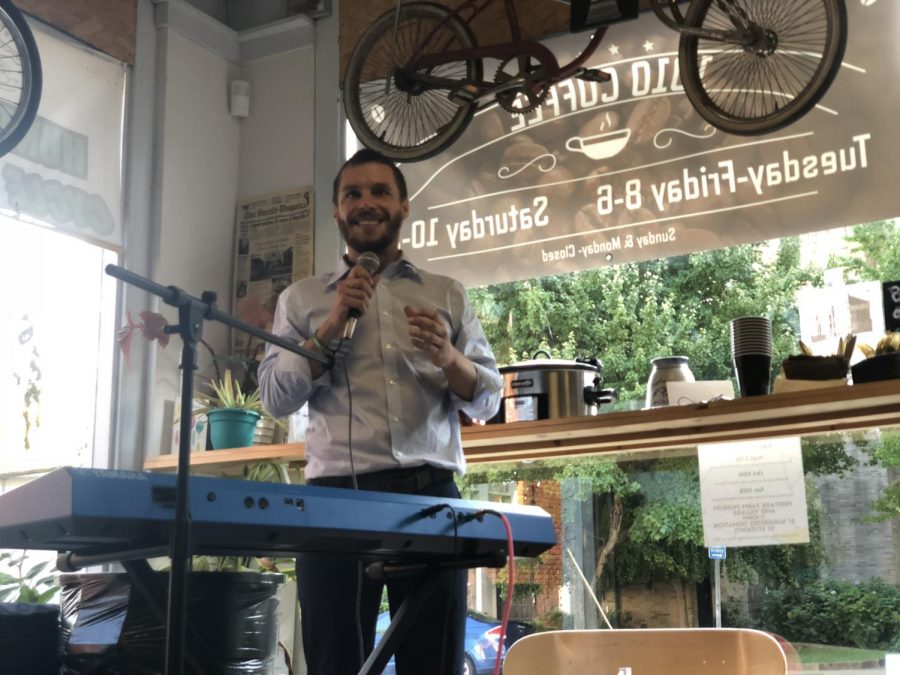 Community leaders, activists and progressive political officials and candidates from across the state shared stories and sentiments with Huntington residents Monday evening at 1010 Coffee Shop on 10th Street as House District 16 candidate Dakota Nelson, with help from the Working Families Party, hosted his official campaign kick-off event more than a year before first votes are cast.

The slate of prominent populists in attendance at Monday’s meeting include, amongst others:

• Stephen Smith, a candidate for governor and leader in the West Virginia Can’t Wait Movement;

• Rep. Danielle Walker of House District 51, who has made a name for herself as one of the state’s most well-known and passionate populists since being elected last year;

• Rusty Williams, a patient advocate on the West Virginia Medical Cannabis Advisory Board, prominent leader in the legalization movement and candidate for House District 35, and

“We’re coming together to hold a hand out to each other. This is the message we can spread throughout with our political efforts,” Nelson said. “What struggles have been facing you? What has been challenging you? We will stick up for you. That’s the beauty of people power, and that’s what we’re here to do.”

Nelson said a major focus of his campaign is to build long-lasting local power deeply rooted in populism to address and combat the most urgent issues negatively impacting local residents and their communities.

“That’s what this is all about. The human condition is inherent in all our challenges no matter how hard we’re trying,” Nelson said. “This is a necessity of what we’re trying to do with community power and with people power—coming together to recognize our human condition and how much this political institution, from local to top, has so much to do with that and where we find ourselves within this struggle of life.”

Building such power within local communities, especially on behalf of those most impacted by the most pressing issues facing their community, is a shared goal of a movement of progressive populist candidates currently running for office across the state, some already elected and many involved and organizing under the West Virginia Can’t Wait umbrella.

“Never in American history—never in West Virginia history—have we gotten the change we needed because of one person, and certainly not one politician. Politicians didn’t win the mine wars; politicians didn’t win the civil rights movement; politicians haven’t achieved a single one of the things that make our lives worth living,” Smith said. “So, I’m proud to have my small part of the movement be to be on that ballot line, and I’m even more proud to be arm-in-arm with all of you and people like Dakota (Nelson) and Danielle (Walker) and Rusty (Williams) and so many others in this room.”

Walker said West Virginia’s growing movement away from corporate corruption toward progressive populism is one unrestricted by, and capable of tearing down, traditional partisan barriers and geographical and other boundaries.

Nelson said the current and developing movements in United States and West Virginia politics are vitally important and will likely go down in history books as a significantly influential era of populist political revolutions in the region.

“Folks, this is a little unique piece of the West Virginia history pie we’re cutting out and making our own right now,” Nelson said. “In 2016, where was this group of people? We were disseminated, out on our own looking at what’s coming at us. Now, we’re coming together under this umbrella, under our common causes.”