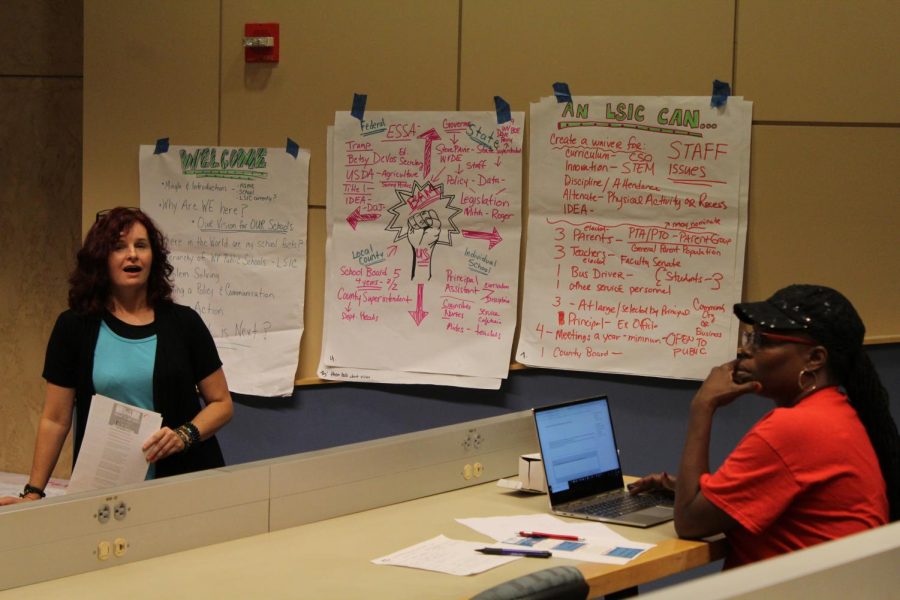 “Years ago, when the federal government was doing the No Child Left Behind plan, one of the things West Virginia did was create these Local School Improvement Councils, or LSICs,” Jenny Anderson, director of Families Leading Change West Virginia, said. “These councils were put in place years ago, but they were never really implemented how they were supposed to be.”

LSICs have been gaining significantly more public attention, especially on social media, as a result of being debated and included in recent state legislation, Anderson said.

As outlined by current policy, each public school in the state is supposed to have a functioning LSIC comprised of twelve or thirteen individuals: a principle as ex officio, three elected parents of students, three elected teachers, a bus driver, one other school personnel member, three community or business partners for the school and, in some cases, a student body representative.

“They are actually supposed to be the governing bodies for every public elementary, middle and high school in West Virginia,” Anderson said.

LSICs are meant to be representative of the concerns and desires of community members of all backgrounds with children who are students at a specific school and all other locals in some way involved with the school or its students.

“LSIC meetings are supposed to be public,” Anderson said, “but that’s not something that is generally known.”

Anderson said she believes local communities are beginning to come together to organize and wield the potential power of LSICs with hopes of initiating genuine positive changes in public schools and their policies.

“I think this is the start of something big for education,” she said.

While the movement has gained considerable momentum over recent weeks, many parents and concerned community members are still struggling to access necessary information regarding policies and other specifications related to their abilities to become more involved in improving local public schools.

“It is difficult to be knowledgeable and educated on all this stuff when it is all so difficult to find,” Anderson said. “I had to find all this information for myself when I was first starting out. It was difficult for me and took a lot of time, and I didn’t have a job. How are people who do have jobs and want to know this stuff ever going to find it?”

Another community member in attendance at the training, Anna Warren Lewis, said she has made attempts to become more involved in and help improve local schools, but what she has subsequently discovered is less than comforting.

“I know two local schools that told me outright they don’t use their LSICs,” Lewis said. “They’re not even functioning. It’s almost like some counties and schools don’t want parent input.”

This was an issue echoed by many community members participating in Monday’s training.

Michelle Wiese Norweck, a Cabell County Schools parent-teacher organization president with two children who are students in local high schools and one who recently graduated from Marshall, said becoming more active to help improve public schools is immensely more complicated and challenging than it may initially seem.

“Unless you, as a parent, take the initiative to meet with your local district and county board members and develop a relationship with them, you’re never really going to know what’s going on,” Norweck said. “It’s been getting harder and harder on working parents. It’s not that parents don’t want to be involved, but unfortunately, they generally don’t have the time, the energy or the child care.”

Norweck said for concerned community members and parents wishing to instigate change, the reality often seems to be that some counties and schools simply are not receptive to public pressure.

“Sometimes it feels like the county doesn’t even care. Some principals close the door to me not because they think I’m a rebel rouser, but because they know I’ll hold them accountable and hold their feet to the fire,” she said. “It’s really difficult, as a parent, to be an active part of your community and your school when the county and schools are not receptive to you.”

Representative Evan Worrell (R- Cabell, 18), who has children both already graduated from and still attending public schools in Huntington, said he first heard about LSICs when they were debated during a recent legislative session.

Worrell said it is shockingly difficult to comprehend how parents of students are reasonably meant to be aware of currently-existing LSICs in their communities, despite that they were meant to be completely implemented years ago.

“When I think about LSICs, I think a bottom-up approach is going to be more powerful than trying to go top-down,” Worrell said. “That’s why I want to get involved.”

West Virginia’s next state school board meeting will take place at 10:00 a.m. Wednesday, Aug. 14, at Capitol Building 6 in Charleston. The Cabell County Board of Education meets every other Tuesday, and its next meeting is set to occur Tuesday, Aug. 20.