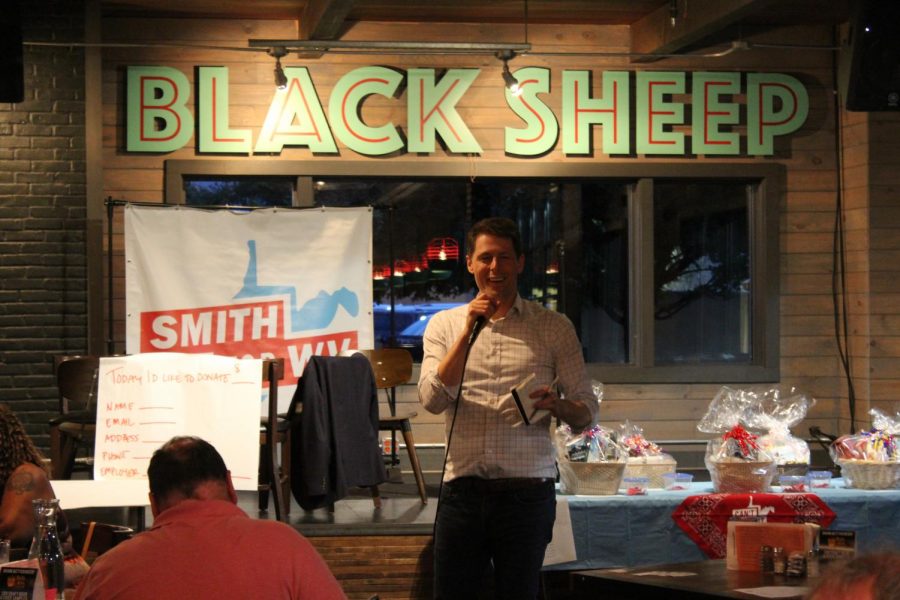 At Tuesday night’s town hall in Huntington, Stephen Smith’s gubernatorial campaign under the West Virginia Can’t Wait movement announced it has participated in 100 town halls and more than 500 total events across the state since its beginnings last November.

“Tonight is our 100th town hall we have done for this campaign, and my favorite part of that is when you add up the combined town halls of every other gubernatorial campaign in the state, that number is zero,” Smith said. “We are beating them 100 to zero in town halls.”

Tuesday’s town hall in Huntington was part of the Smith campaign’s Summer of 10,000 Conversations Tour, during which Cabell County was responsible for bringing together more interested and concerned citizens than any other county thus far, Smith said.

“Cabell County is currently smoking every other county in these conversations,” Smith said. “Today is the biggest turn out for any of our town halls this summer.”

Smith spoke with locals about issues most impacting their lives and their communities, including education reform and the state’s addiction epidemic, which has notably hit Huntington likely as hard as any town in the country. Several other local candidates for public office participated in these discussions, including Dakota Nelson, a Democrat running in Huntington’s House District 16, and Anna Lewis, also of District 16.

Smith made appeals to voters by examining critical flaws in political power dynamics across the state, as well as by outlining the driving forces and values behind his campaign for governor which he hopes will help transform those dynamics in favor of everyday West Virginians.

West Virginians, he said, are ranked first in the country in time spent with friends, family and neighbors, and in the top five in various measures of charitable giving, volunteer service and military service.

“I learned the exact same lesson every West Virginian learns growing up,” Smith said, “which is here, we judge ourselves by the people we care for, not by the things we own.”

Despite such outstanding accomplishments of a notably kind-hearted population and the reality that now is the wealthiest moment in the state’s history based on GDP per capita adjusted for inflation, the people of West Virginia have been routinely ignored and betrayed in the context of wielding genuine political power to make fundamental and necessary changes to their lives and their state, he said.

“One in two kids in our state lives in a family that doesn’t have enough money to make ends meet […], 41 people leave the state each day […] and we have historic levels of mental health issues and addiction,” Smith said. “We have a government right now in which no one is properly represented except for the people getting rich off of us.”

Through all their pain and trauma, West Virginians always find a way to lend each other a helping hand when necessary, Smith said.

“When someone else is hurting, we are there to help them no matter who they are or what they believe,” he said.

Smith said likely the biggest obstacle faced by his campaign and other West Virginia Can’t Wait candidates will be traditional politicians’ partisan attempts to convince everyday citizens to turn against each other.

“They want to convince us there is some massive disagreement between us,” he said, “but that is a lie.”

Most people of all different backgrounds and ideologies in West Virginia agree on many of the most pressing issues impacting the state, he said, including common sense education reform and certain ways to assist those suffering from addiction.

“The simple idea of this campaign is the people in our state closest to the pain and working the hardest are also best-suited to solve our state’s problems,” Smith said. “The only way we get what we want is if we take our government back for ourselves.”