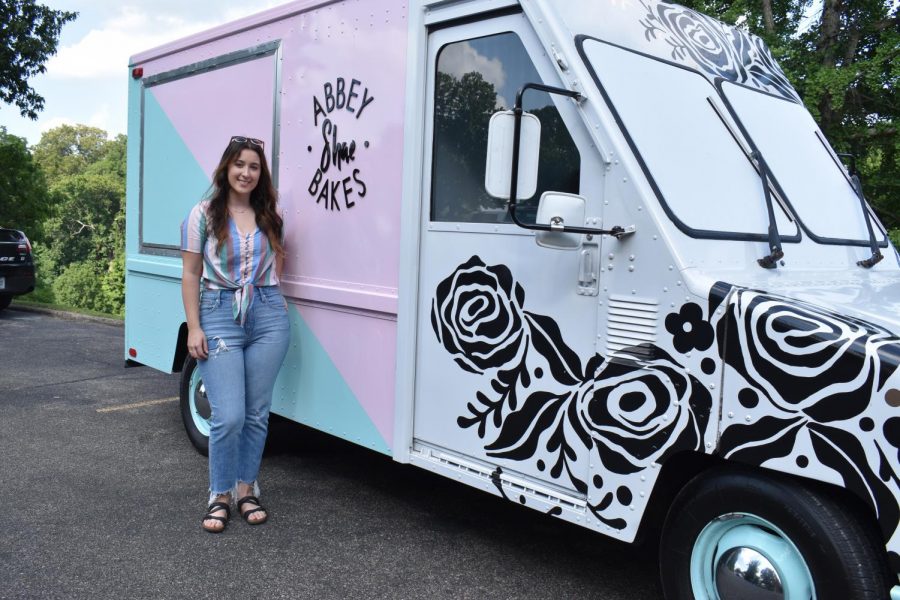 Abbey Shae Kimball, 22, began baking during college as a way of relieving stress brought on by her classes.

A new food truck in Huntington with a sugary, French twist is on the move.

Abbey Shae Bakes, named after its founder Abbey Shae Kimball, 22, can be found downtown throughout the week with a plethora of sweet treats, specifically, French macarons.

Kimball, from Chesapeake, Ohio, said she discovered her passion for baking while in college in Nashville.

“I went to college at Belmont University, and I majored in song writing and business. My classes were very music-oriented,” Kimball said. “I loved it, but it started to get very stressful for me, so baking was what I would do when I would come home. It was like a stress relief for me to try new recipes, and in Nashville I discovered macarons.”

The first time Kimball tried the confection, she said she knew she wanted to one day perfect them herself.

“It was a lot of Youtube. When I would want a break from homework, I’d get on Youtube and watch tutorials of macarons,” Kimball said. “I knew they were hard, and I kept failing, and so I would just do trial and error to try to improve.”

When Kimball came home from school and began making macarons for her friends and family, she started to receive more and more requests.

“Friends and family started asking, like, ‘hey, can you bring some to my party or can I get some from you?’ And I set up a rinky-dink Facebook page, and people started messaging me,” Kimball said.

Kimball said she used the skill she gained from business classes at Belmont to officially start her business last fall.

“About a year ago, we got an old DIRECTV truck and completely gutted it and redid everything,” Kimball said. “We started in October in Ohio, and we did some events in Lawrence county, but there’s not a whole lot going on, so in April we got everything approved for Huntington and we’ve been doing everything here since then.”

Kimball said the bakery on wheels has seen growth since its beginnings, especially over the past few weeks.

“It’s kind of blown up, and it’s only me,” Kimball said. “I think a lot of people picture that it’s a bunch of people in a kitchen somewhere, but it’s literally only me.”

Kimball said she hopes to continue to see even more expansion of Abbey Shae Bakes in Huntington.

“It’s going really well with the food truck, but ideally it would be nice to get a brick and mortar place around here and open a bakery,” Kimball said. “But the goal is really just to continue to grow, even if it’s just little things, like we just got our first real point-of-sale register, so just small things like that.”

Kimball’s homemade macarons may be sweet, but she said the line of business is even sweeter.

“It’s so much fun,” Kimball said. “Just being able to work events where people are so excited and happy and everyone is in a good mood is great.”

Kimball said the location of the truck varies day-to-day, but updates can be found on the Abbey Shae Bakes Facebook page.