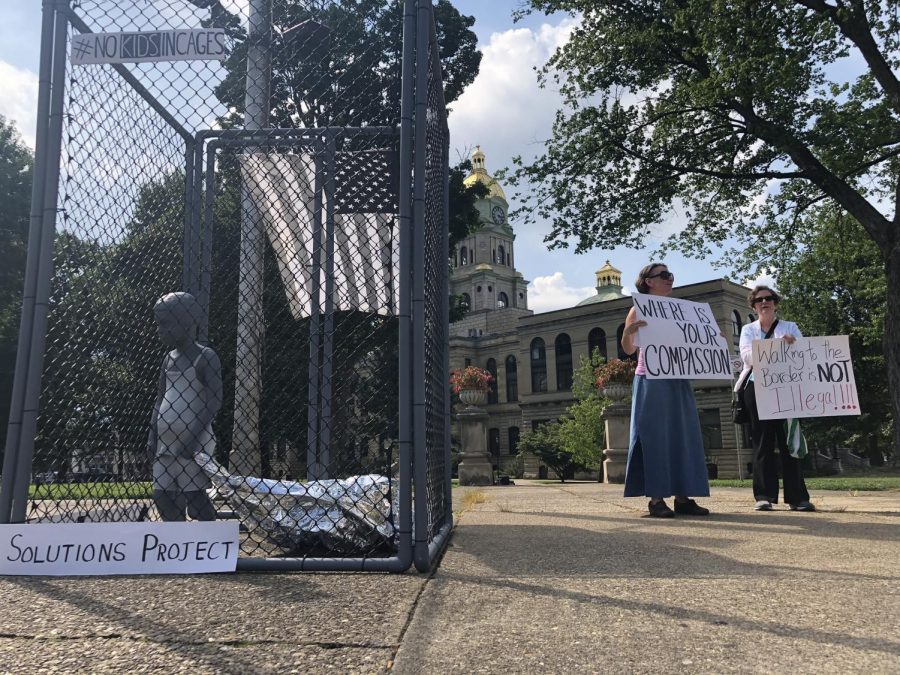 Amid recent controversies surrounding living conditions for those detained in border facilities run by the United States federal government, Women’s March West Virginia members and other concerned residents took to the streets of Huntington Thursday to raise awareness about the issue and make their voices heard.

“We are protesting to demonstrate our opposition to the cruel and inhumane conditions at the U.S. border, where children are being put in facilities without basic medical care, soap, water and safe sleeping arrangements,” Larry Brumfield, a local artist at the protest, said.

Since President Donald Trump took office, according to a recent analysis of federal data by NBC News, roughly two-dozen immigrants have died while in custody of Immigration and Customs Enforcement (ICE), a federal law enforcement agency of the United States government.

Additionally, last month, as reported by the Washington Post, the Trump Administration attempted to appeal in court an Obama-era ruling, which found that, “child migrants and their parents were detained in dirty, crowded, bitingly cold conditions inside U.S. Customs and Border Protection facilities along the southern border.”

Less than a month before, the Washington Post reported that of the nearly 2,000 children being held in U.S. Border Patrol facilities, hundreds were kept there for more than a week, despite federal law and court orders requiring they be transferred elsewhere, to more hospitable shelters.

In the 2017 ruling, U.S. District Judge Dolly Gee found immigrants in southern Texas were given inadequate meals, sometimes forced to share a cup of water between 20 individuals and not provided access to necessities like showers, toothbrushes, soap and towels. The ruling also found individuals were forced to use the toilet in front of up to 50 other detainees and were unable to sleep at night on cold concrete floors, with the lights left on, equipped only with an aluminum blanket. Detainees have also regularly been made to stay behind chain-link fences resembling cages or pens.

As reported by the Washington Post, the federal government, in court, recently argued the conditions within the detention facilities should not be ruled in violation of the “safe and sanitary” requirement of the Flores Settlement Agreement, which Gee’s 2017 ruling determined the Obama-era conditions were also in violation of. The Trump Administration argued the current conditions do not violate such a requirement because the Flores Settlement Agreement does not technically mention providing specific items and necessities like toothbrushes, towels, dry clothing, soap or sleep.

Another Washington Post article released only four days later describes the perspective of David Rohde, an executive editor for the New Yorker who was kidnapped and kept hostage by the Taliban for seven months in 2008.

Brumfield said the situation and conditions at the border are made even more despicable considering that many immigrants and detainees come to America to escape horrific and dangerous conditions in the countries they come from, largely as a result of U.S. sanctions and detrimental actions in those countries.

The psychological damage being inflicted upon children in the detention facilities will negatively impact them throughout their lifetimes, Brumfield said.

“Can you imagine anything more terrible than a child kicking and screaming, being taken away from their parents’ arms to be caged?” he asked. “What if it was your child trapped in there?”

Amie Maynard, another of the Huntington protestors, said the detention centers seem to be more like concentration camps.

“It reminds us of the concentration camps in WWII for Japanese people in the U.S.,” Maynard said. “It’s something we thought we’d never see again in this country, and I never thought I’d see something like this in my lifetime. It is extremely disturbing.”

Maynard said too many people have a misconception that immigration is bad for the country and that immigrants have a negative impact on regular working people, such as by taking away potential job opportunities.

“It is really interesting to see how this is playing with Trump’s base and how they are being manipulated,” Maynard said. “These people [being detained] are powerless. They are not coming in and taking anyone’s jobs. It’s the people with real power making all our lives more difficult.”