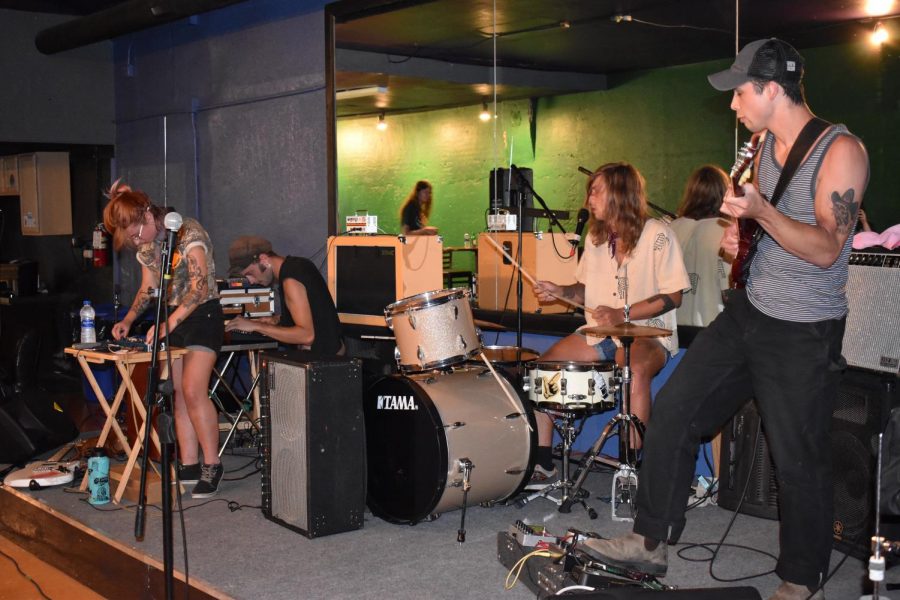 The Marigold, an all-ages music venue in downtown Huntington, is bringing a more intimate, focused alternative to the city’s current arts scene in a sober and safe environment.

Owner KerryErin Coats said the venue, which opened on March 1, is important to the resurgence of community in the area.

“I grew up in Huntington and whenever I was a teenager there were all-ages venues, and that’s where I met some of my lifelong friends and was introduced to hardcore music and this really strong sense of community,” Coats said. “Those sadly kind of fizzled out and I think it’s really important to have a space that just focuses on art and music as well as something that’s not focused around alcohol.”

Coats is a recent Marshall University graduate with a B.A. in public health, which she said helped fuel the fire to open the venue.

“It was kind of fueled by my love of public health as well as my love of music,” Coats said. “It’s been a dream, and when the space became available, the landlord was really excited to have something here that wasn’t a bar. There was just nothing but positive feedback from the community and it just fell into place.”

Coats said the alcohol-free space, while being a preventative measure, is also an opportunity for Marshall students to enjoy music in a more comfortable setting.

“We’re right by campus and you don’t have to be a certain age. Anyone can come here, and there are a lot of Marshall students who are interested in art and music, and we have a variety of that,” Coats said. “We have workshops and shows throughout the week and on the weekend, and everything is usually over by 11 p.m. if you have class early.”

Coats said The Marigold is also a perfect place for those who are in college but still underage.

“At Marshall, you have a lot of folks that are in that gap of outside of high school but can’t get into bars,” Coats said. “So this is a perfect place for them to be able to have a place to go out and be social.”

Although the venue has only been open for a few months, Coats said she hopes to play a role in the revitalization of downtown.

“Whenever I was younger, I always wanted to leave. I was going to go somewhere where the art and music and the community were more established and there were all these things that I wanted that I wasn’t getting in Huntington. After spending most of my 20’s traveling across the country playing music, I realized that it was important to build these things where your roots are,” Coats said. “I’m a home owner here, I’m invested in the community, and if everybody runs away the place will disintegrate. I think it’s important for people to stay, and I think that’s something I’ve noticed in other places where there’s a resurgence of community and revitalization is that it’s done by the artists.”

Coats said it is important to provide exposure to art and music to those of all ages.

“I want to help create the things that I want in my life and also giving something for people to do. Because even when I was a teenager, too, I heard people say ‘there’s nothing to do.’ Well, there’s a lot to do now, especially downtown, and I think that it can encourage and inspire and transform people’s lives being exposed to music and art,” Coats said. “I know if I hadn’t experienced that first hand, I wouldn’t have been as drawn to participate in it. I think it’s really important to give art and music as an outlet in an area that’s stagnant and whenever people are stagnant and bored, there’s a lot of trouble.”

Coats said the venue took off quickly, with a variety of new faces at each show.

“Whenever the vision came to life, I didn’t think we would open until summer, but everything fell into place and we had our first show March 1,” Coats said. “One of the best memories I have was that first show, having the place packed with new people, which was really cool. It’s been overwhelming how fast things have taken off, but the whole thing has been exciting.”

A schedule of shows, ranging from hardcore rock to bluegrass style, along with poetry and other events, can be found on The Marigold’s Facebook page.