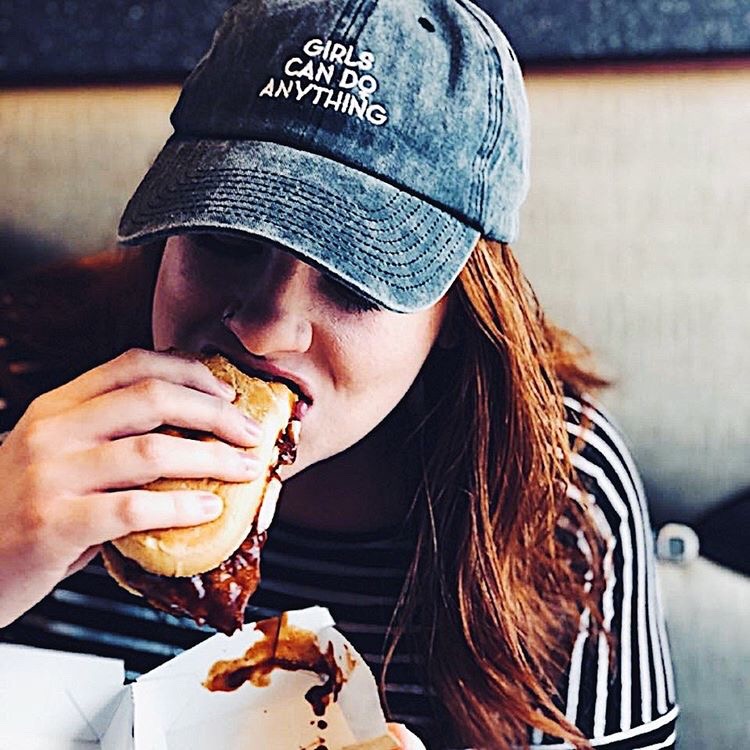 Marshall student Alex Runyon’s main platforms for her blog are on social media.

Most people would never allow a stranger in line in front of them at a restaurant choose their next meal, but that is precisely what Alex Runyon did. As part of her “Eating Out with Alex Runyon” blog, Runyon not only reviews fast food items and restaurants on social media, but also creates YouTube videos, including “Letting the Person in Front of Me Decide What I Eat,” which she said has been one of the most fun to create so far.

Runyon, a senior English major at Marshall University, said she thought of the idea for a fast food blog a few years ago, and she created her Instagram account, @eatingoutblog, in January.

“This all started as kind of a joke, like what if I make a very earnest food blog but only talk about fast food,” Runyon said. “It was a silly idea, but the more I thought about it, the more I liked it. My friend Josh McDonald helped me come up with the name and probably won’t let me forget that.”

Instagram is Runyon’s largest platform for the blog, but she said her website acts as the main base. On Instagram, Runyon posts a picture of the food item she is reviewing accompanied by a lengthy, and funny, review as her caption. So far, Runyon has reviewed specialty and recently released food from Fazoli’s, Wendy’s, McDonald’s and Taco Bell, among many others. She’s also posted guest reviewers on her account.

Though Runyon’s YouTube channel is still a work in progress, she has four videos uploaded, is editing two more and is working on two series called “First Bite” and “Unchained.”

“There’s a series with two episodes completed called ‘First Bite,’ which is all about trying novelty foods or food that aren’t accessible every day, (such as) food trucks and limited time menu items,” Runyon said. “I’m also working on a series called ‘Unchained,’ which compares big chain fast food to local fast food.”

Runyon’s first few YouTube videos were created in studios, but after filming her latest at a restaurant, she said she prefers making videos out in the world. At Marshall, Runyon has directed comedy sketches for Body Shots, and she’s made a short film for Huntington Music and Arts Festival.

“Another fun part has been learning the technical side of everything,” Runyon said. “Buying Adobe Premier and relearning how to edit video on my own is so much fun. Just learning that I can be a fairly independent creator is fun and empowering.”

Runyon said her main goal for her blog right now it to just keep it going and see where it takes her.

“That sounds small, but it takes a lot of time and planning and money to execute this project, and between school, work and performing comedy, it can be overwhelming,” Runyon said. “I’d love to build a bigger following though and eventually maybe monetize on Instagram and YouTube. That’s big dreaming, but I have a big appetite.”

Runyon said she’s open to suggestions for reviews and videos, and she’s had guests on some of her videos, which is something she’s always open to as well.

“People come to me with ideas, and I haven’t turned down anyone; I love that people are interested in this,” Runyon said. “People have had such good ideas for the blog, and they’ve been really willing to share those with me, which I appreciate. I may not be able to get to all of the suggestions, but I’m happy to have them.”

One of Runyon’s favorite foods she’s tried so far for her blog is Wendy’s breakfast, as it’s not something available locally.

“It’s something I found when I was out of town,” Runyon said. “I just accidentally stumbled into a Wendy’s with breakfast food, and it happened to be the Wendy’s Flagship Restaurant, which has a museum of Wendy’s memorabilia. It was very cool. I like having an excuse to eat all the fast food I can when I’m out of town, basically.”

“I didn’t consider doing video until the second iteration of this project, but it makes sense to do something visual and something that can be overtly funny,” Runyon said. “My first video, ‘Which Fast Food Pairs Best With Caviar?’ is a very different thing than a review of a new menu item at Taco Bell, but it’s more sharable and more fun.”

Runyon said she thinks it’s important to have a blog on social media, because people her age would rather read reviews or watch videos than be directed to a website.

“My main goal for the channel is to create a space that showcases the fun you can have with fast food, something that is often relegated to the ‘guilty pleasure’ column of life experiences,” Runyon said. “Fast food is affordable and accessible. It’s what most of my friends eat on a regular basis. There’s no reason not to have fun with it.”