Where Marshall Can Take You: Honduras 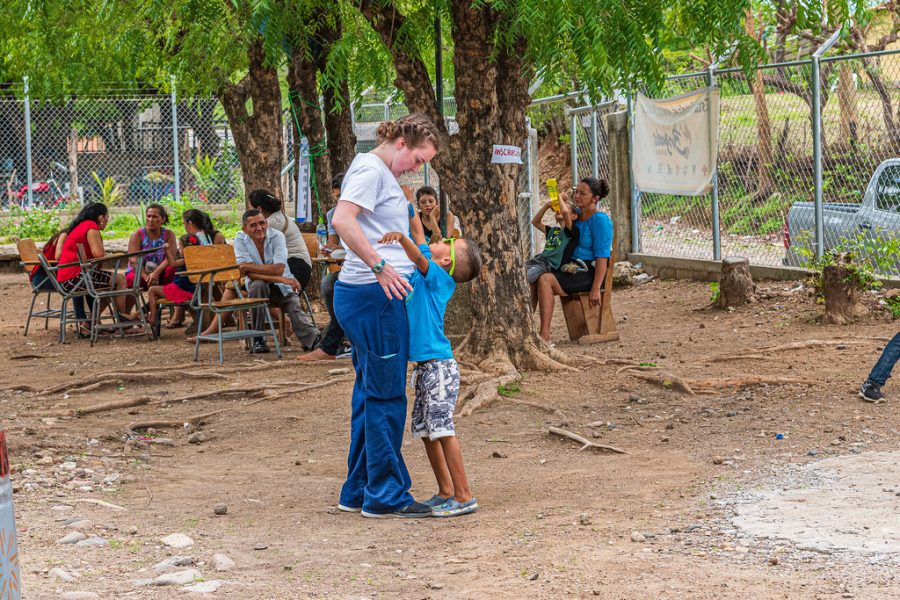 Student embracing young Honduran boy after a visit to one of the facilities Marshall students had set up for their trip.

Expanding their knowledge of medicine throughout the world is one of the many lessons Marshall University’s pharmacy students learned recently when they studied abroad in Honduras, according to student, Whitney Fields.

“The biggest thing I learned is that not everybody has the means like we have here,” Fields said. “A common restroom or running water, they are limited to on a daily base. I guess I didn’t think it would be that limited.”

The team of seven students and one faculty assisted three different communities to learn about medicine and health care agencies during their seven day trip. Though sometimes troubled by the language barrier, Fields said she still learned a lot about the community’s knowledge of health.

Students studying pharmacy provided services to the people of Honduras like diagnosing illness and providing medicine to those who needed it. The team was able to learn through presentations as well as real world experience, according to Fields.

Each day, the students would go to their locations, perform their duties alongside Honduran translators and learn from presentations done after returning to their living site at the end of the day.

Tyler Clay, a clinical assistant professor at Marshall and the faculty preceptor for the trip, said Marshall students have previously visited different countries, including Honduras, through programs such as Herd for Honduras. Clay said there was more student interest this year, so the school partnered with the Global Medical Brigade to get students to the country.

“The education maybe wasn’t necessarily the same as the education people can receive here,” Clay said. “We had physicians with questions that physicians there were not able to answer just because their level of medical education is different from ours.”

Fields said that even with translators, it was occasionally difficult to relay medical terms to the Honduran community, and the students would sometimes need to act out the information to convey to the patients.

“We had translators, but sometimes they didn’t know how to translate English medical terminology in Spanish,” Fields said. “We would act out and show them like how to take their temperature. We would have to show them how you put the thermometer in their mouth and close down and things like that.”

Fields said her favorite moments from the trip included the reactions from patients.

“My favorite thing was the reaction on the patients’ faces and just how happy they were that we were there,” Fields said.

Clay said his favorite moments of Honduras were seeing the progress students made.

“My favorite thing is seeing the connection that the students made,” Clay said. “It becomes more obvious that you know things you don’t think you know when you’re out in the field. And students realize they had more knowledge than they think they had.”

The School of Pharmacy participates in  programs in other countries to allow students to experience medicine all over the world. Fields said it offers the students a chance to use what they have learned in school out in the world.

“I think as far as practicing [in America] we really rely on technology,” Fields said. “Whereas practicing there, you really have to be knowledgeable of what you’re doing.”

Sarah Ingram can be contacted at [email protected].