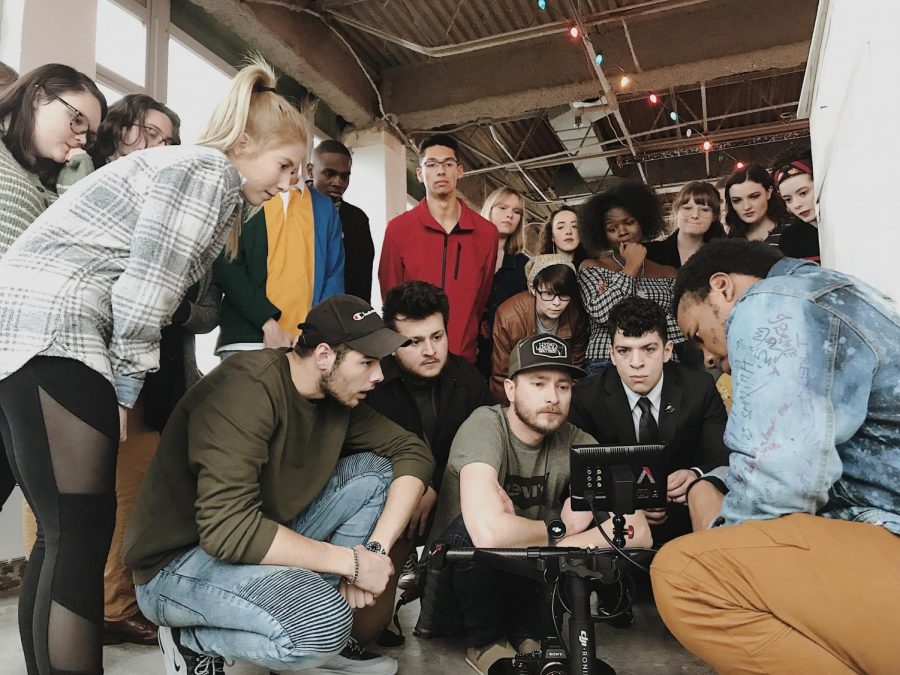 In April of last year, one Marshall University student, Jason Morgan, then-sophomore commercial music major, had the idea to tell a coming-of-age story of Appalachian artistry, culture and inspiration in West Virginia.

Today, more than a year in-the-works, West Virginia’s first ever musical feature film, “Wake Up Dorothy,” produced by and starring only Appalachian creators, including over 25 Marshall students, faculty and alumni, has entered post-production processes, Morgan, who is a producer, director, screenwriter and composer for the film, said.

“Wake Up Dorothy” stars several current Marshall students, including Kristin Johnson as Dorothy, Isaiah Johnson as Johnny Wolfe, Megan Bailey as Raven, Cayce Murphy as Gracie, Cameran Macklin as Stone and Paige Looney as The Twister Journalist. Marshall alumni featured in the film include: Buffy Six as The Twister Photographer, Andre Williams as Ari and Daniel Parlock as The Market Director.

The film, inspired by a song of the same title he wrote in July 2016, is filmed almost entirely in West Virginia and follows the stories of several aspiring artists and their struggles for achievement, self-expression and finding their places in the culture they are a part of, Morgan said.

All the songs showcased in the film were written originally for the production by West Virginian songwriters and performed entirely by Appalachian musicians, Morgan said.

“The goal was simple:” he said, “Create an opportunity for West Virginia and Appalachian creators to collaborate on a cinematic project that would challenge and change the atmosphere of creativity in the state and region.”

In Appalachia, too many people believe home-grown creativity is dead or dying, Morgan said, when in reality, creativity is alive and well, but artists simply lack networking opportunities and resources readily available in other places.

“I know of dozens of creators—across photography, visual art, film, music, performance and more—in the metro area who do amazing work but feel that there’s not a place for the arts here,” he said. “But if we band together, we could change that; make opportunities. You have to be a groundbreaker; a pioneer; a mountaineer. Truly.”

“Wake Up Dorothy” is a film telling a story not often told in popular narratives about West Virginia and will be rooted in the ideas of positivity, courage, art, creativity, dreams and inspiration, Morgan said.

“It’s a unique way of storytelling that has its own flare and heartbeat that is often missing in both independent and Appalachian cinema,” he said, “a certain magical, whimsical, bohemian artistry that is truly vibrant.”

Morgan said he and the film’s other creators have been adamant about featuring as many Appalachian locals as possible in the film from the very beginning.

“In doing this, it shows that we, as Appalachians, are telling our story here,” he said.

Kadin Tooley, a junior video production major at Marshall and an assistant director and 2nd unit director of photography for the film, said “Wake Up Dorothy” could be uniquely inspirational for youth in Appalachia.

“To see a story so genuine and pure be told on film in this area is a rare commodity,” Tooley said. “This can be something that children see and know that there are good stories being told here in West Virginia.”

The story presented in the film, he said, is about being a creator in a community of other creators while learning about oneself and one’s art.

“It is about family in its broadest sense,” Tooley said.

Tooley said his experiences working on the film have also proved to be a valuable learning and growing process for himself as a creative.

“This film has provided me with more contacts and experiences than I could have ever asked for,” he said.

Morgan said he hopes “Wake Up Dorothy” will be premiered in Huntington, across the state and at festivals throughout the United States early next year.

The film is being produced in association with Huntington broadcasting and media production company Studio 291.