RED’S READS: ‘The Song of Achilles’ 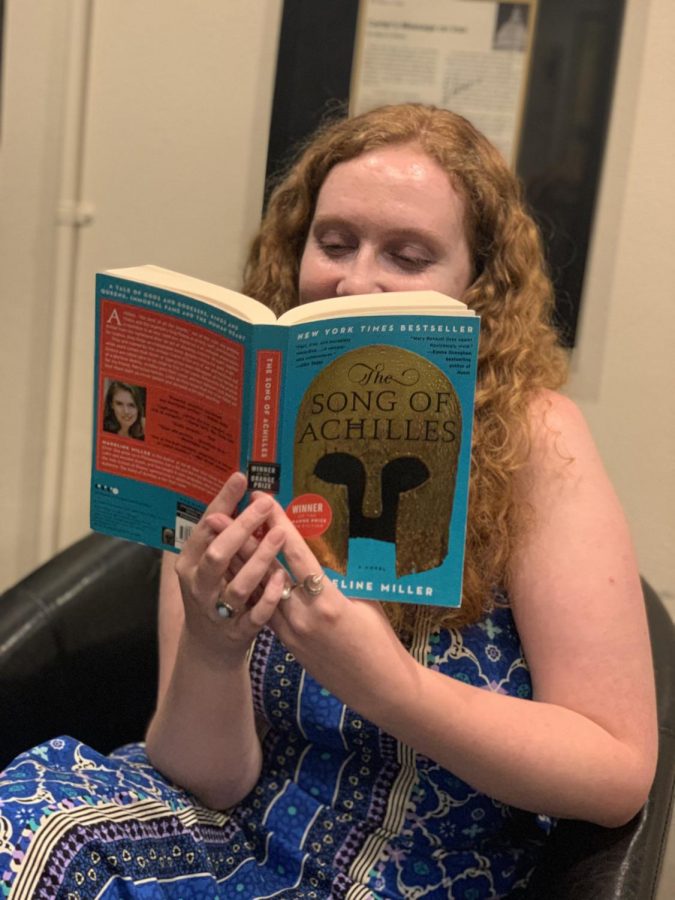 Welcome to my first ever book review! This is a new column I’d like to try out for the summer, kind of like a summer reading list/program. Did you ever participate in the summer reading programs at your local library when you were a kid? Or do you still do so now? I did every summer when I was younger, when my love of reading knew no bounds. Now, unfortunately, I don’t have as much time as I used to for reading, but one goal I have for myself this year, and this summer especially, is to read more. I thought I’d share some of my book choices with you, and I would love for you to contact me to let me know what you’ve been reading (I just might review it).

So, let’s get started. The first book I completed this summer, while recovering from wisdom teeth surgery, is an award-winning novel called “The Song of Achilles,” and it’s by Madeline Miller. It’s actually Miller’s first novel. Based on the Iliad, this is a retelling of the story of Achilles and the Trojan War. I’ve never read the Iliad, but I have seen the movie “Troy” and previously knew some of the myths about Achilles. (Most of us had a Greek mythology phase when we were younger, right? Thanks Percy Jackson.) But just because this book is about Achilles doesn’t mean it’s from his point of view. Rather, it’s narrated by Patroclus, Achilles’ best friend.

Patroclus is an exiled prince, sent to live in Achilles’ father’s kingdom. At first, he is nothing but an outcast, unwanted and unloved, until he and Achilles become fast friends. The pair study and train together, though Patroclus is no match for the greatest warrior the Greeks have ever seen. Achilles’ mother Thetis is a minor deity, a cruel goddess of the sea. She disproves of Achilles and Patroclus’ friendship and wants to protect her son at all costs, constantly begging him to live in the sea with her.

But let me back up. Before Patroclus is exiled from his father’s kingdom, he travels to the kingdom of Tyndareus, father of the famed Helen of Troy, though this is before she became known as that. At this point, Helen’s father invites potential suitors for his daughter from throughout Greece, Patroclus among them, though he is still very young. During the suitors’ time in this kingdom, they make an oath to protect Helen, no matter who she chooses for her husband. Patroclus makes the oath as well as every man present. That’s important.

Flash forward to when Helen is kidnapped and taken to Troy. That old oath has not been forgotten, and Patroclus realizes he must help, though he is more of a healer than a warrior. Thetis, Achilles’ mother, refuses to let her son fight and sends him away. She knows of a prophecy about Achilles’ death in the war. However, Achilles is determined to fight and to prove himself. He goes to war with Patroclus at his side.

And those are all the plot details I’m going to give you! You’ll have to find out what happens once you read it. All I’ll say for now is his heel does not have anything to do with his death (I was surprised).

This book really has mythological charm with prophecies, gods and goddesses, romance and heroes. Dreamy settings, well developed characters and a stream of consciousness narration made this a quick read for me. However, the second half of the book tends to be slow going and unnecessarily drawn out. I didn’t realize the Trojan War lasted so long, and the book tends to get clunky toward the end. Also, since this is a retelling of one of the most famous works of all time, I understand that Miller had to make it her own, and she certainly did. There are twists and turns that make this enjoyable. Plus, Chiron and Odysseus, two famous mythological characters, have high importance in this book.

So, as someone who had never read the Iliad, I appreciate this book for what it is. It’s full of pleasant aesthetics, and the prose-like writing is some of the best I’ve ever read. Though some parts are slow, it’s overall a delightful story that could fit into the Greek myths of old. I think the author has a sequel to this book, so excuse me while I go read it.