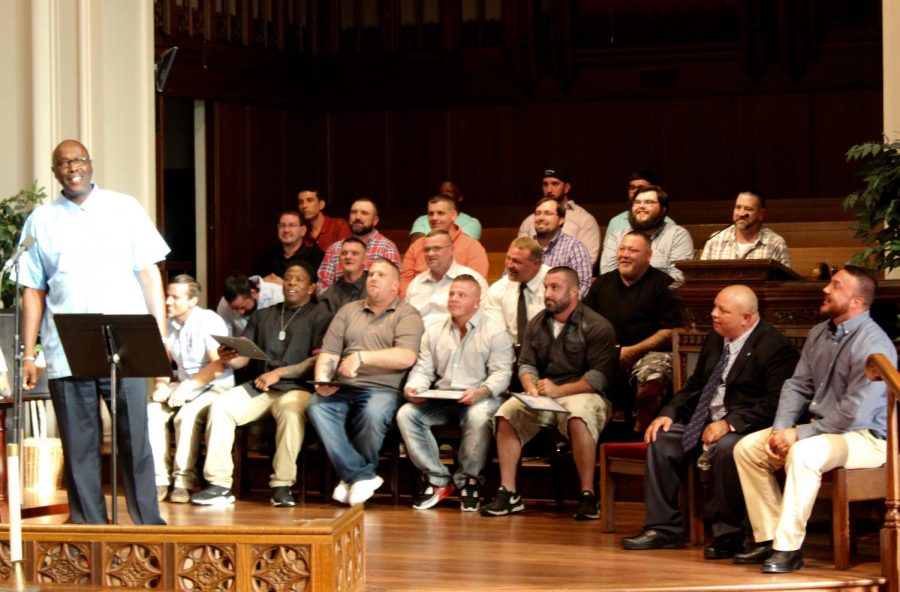 Thursday evening, 20 men stood on stage to celebrate and be honored for an occasion many of them said once felt impossible, and which several of them said they thought they would never live to experience.

“The only reason I’m alive today is because I came to Recovery Point,” Tommy Chaney, a graduate of the program, said.

Chaney said he had been in and out of similar recovery programs since 2003.

“I spent the better half of a decade in and out of these places, and I don’t know how to explain to anybody why you would do that to yourself or what that’s supposed to mean about addiction,” he said, “but hard-headed people like me usually don’t survive.”

His only real friends in his life today, Chaney said, are people he met through his experiences in recovery centers.

“I love everybody on this stage,” he said. “All the rest of my friends are dead or in prison or doing whatever they do.”

Chaney said because of the foundation he was able to build with Recovery Point, he has since been able improve relationships with loved ones and find employment.

“Now my kids know me. They know I’m going to be there. They know what I look like. I’m employed today, and now I get to help people like myself,” Chaney said.

Several other graduates of the program shared their sentiments of improved family relations and employment opportunities, including Seth Parsons, who said he had been in and out of recovery programs since 2013.

His road to recovery was far from perfect, and he made countless mistakes, Parsons said, but the program gave him a platform to change his life if he was willing to work for it.

Anthony Dooley, another of the program’s graduates, said the program helped him improve and develop his senses of self-respect, self-confidence, determination and personal responsibility.

Having completed the program, Dooley said he now believes people can achieve anything they put their minds to, so long as they wholeheartedly believe in their cause and are dedicated to applying themselves.

“I want to thank all my brothers in recovery and everyone here today for making this possible,” Dooley said. “I didn’t think this was possible, but today shows you that we are making the impossible possible. We’re doing things I never dreamed of doing.”

Like several of the other graduates, Shawn Tackett said his journey through the program was difficult, demanding, painful and imperfect.

“I didn’t get it the first time. I was a hard-case. I should’ve been thrown out of the program numerous times,” Tackett said. “Now I have a family; I have my kids and my wife; I’m a business owner; I’m just blessed, man, and I should be dead.”

Tackett said before going through the recovery program he was prepared to spend his entire life in a penitentiary; after all, he had already spent half of it there. But then he found Recovery Point.

“These guys saw something in me I would’ve never seen in myself,” Tackett said. “They loved me when I couldn’t love myself.”

Tackett said he believes he would not be alive today if he had not found Recovery Point.

“If I would’ve settled for what I thought was good enough for me, boy would I have sold myself short,” he said. “Anything’s possible, man. All these guys up here are living proof of that. Everyone in this program has been through it all.”