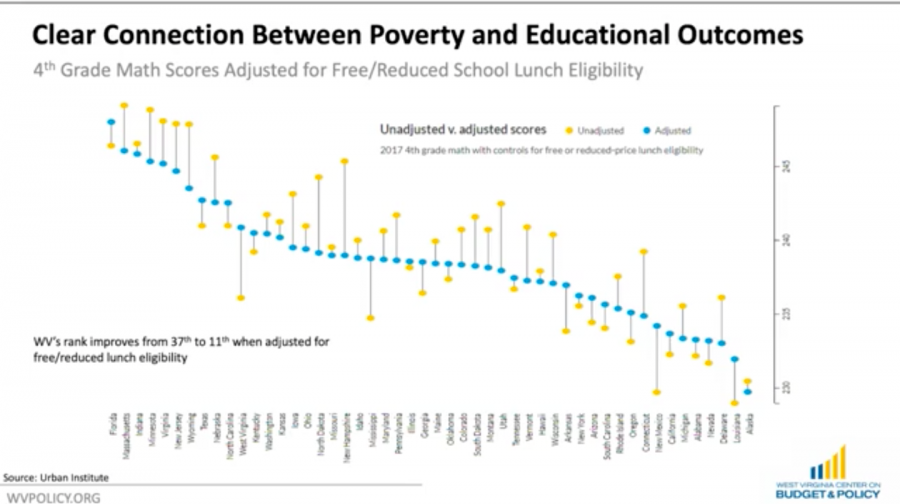 photo courtesy of the West Virginia Center on Budget and Policy

“There have been a lot of discussions on a lot of [education reform] policies, but we’ve noticed there are some things missing from the conversations,” Seth DiStefano, policy outreach director for the WVCBP, said during Wednesday’s Facebook live stream. “We aren’t addressing poverty.”

Based on data-driven analyses, poverty should be at the center of all discussions about policies aiming to improve education attainment and outcomes for West Virginia students, DiStefano said.

The Chamber of Commerce’s report is solely focused on education spending and tying education spending to education outcomes, Sean O’Leary, senior policy analyst for the WVCBP, said. The report, he said, concludes that educational outcomes are too low for the amount of money being spent on public education in the state, but, in doing so, entirely ignores a crucial component of the conversation.

The proposed solutions in the report seem to be to redirect tax dollars away from the public school system and into the private sector, O’Leary said, noting policies protested by public workers in recent statewide strikes like permissions of charter schools and education savings accounts.

“This ignores a lot of the reality of our education spending,” O’Leary said. “The big piece the chamber is missing is the relationship between educational outcome and poverty.”

For example, in 2016, West Virginia ranked 37thin the United States in fourth grade math scores, but when the scores are adjusted to the realities that West Virginia is also fourth in child poverty, one-in-four students in the state lives in poverty and 95,000 West Virginia children live in poverty, the state’s rank changes from 37thto 11th, O’Leary said.

Even within individual school districts, he said, educational outcomes for each school tend to vary drastically depending on the number of students living in poverty, despite that all the schools have the same funding sources, property taxes, curriculums and policies.

“There is a clear, clear correlation,” O’Leary said: “As more and more students are low income and living in poverty, test scores are lower.”

Presenting a graph portraying the correlation between numbers of students living in poverty and educational outcomes in Cabell County elementary schools, O’Leary noted the vast differences between certain individual schools and others, some showing up to 70 percent proficiency while others are as low as ten percent.

“These are all elementary schools in the same school district, same local area and with the same policies,” O’Leary said. “The big difference between these schools that explain the vast differences in tests scores […] is the number of children that live in poverty and attend those schools.”

No other factor reveals such a strong and obvious correlation with education reform, he said.

Huntington High School has about twice as many kids living in poverty as Cabell Midland High School, O’Leary said, and such is evident in the reality that Cabell Midland has significantly higher math and reading scores than does Huntington.

Looking ahead to Monday’s continuation of the state legislature’s special session on education, in which the House of Delegates is set to review another omnibus education bill protested by public employees and educators earlier this month, O’Leary said there are several potential education policies that could reduce student poverty, but such policies would take time to become substantially effective. Some of these policies include measures like expanding child care assistance, earned income tax credits, child allowances for families living in poverty and raising the minimum wage, he said.

Such policies are “all proven ways of lifting people out of poverty,” O’Leary said, “but they take a long time sometimes.”

Shorter term policies aimed more at supporting kids living in poverty rather than eliminating poverty include measures like after school programs, social services, healthcare services and incentivizing teachers to go to low-performing schools with high numbers of students living in poverty, he said.

“There’s such a well-established connection between poverty and educational outcomes that ignoring that fact just sets you up for failure,” he said.

DiStefano said it is difficult to understand how someone could be aware of the data regarding education and poverty and not conclude that poverty is the central catalyst.