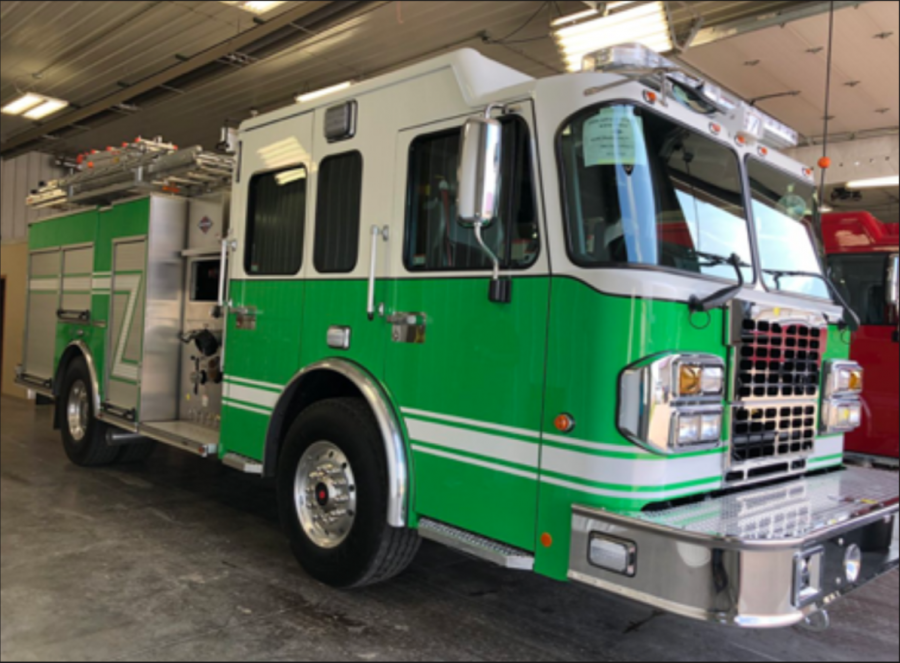 Photo courtesy of City of Huntington

After roughly a year in-the-works, the unveiling of an unprecedented kelly-green Marshall University-themed fire engine by the Huntington Fire Department in the coming weeks is imminent.

The engine will become a regularly-functioning part of the department’s “Station Number 2,” at 534 20th Street, which local firefighters refer to as the “Marshall University Fire Station,” Huntington Fire Chief Jan Rader said.

When she and a few fire fighters initially proposed the idea to Marshall President Jerome Gilbert, Rader said, “he was ecstatic. He thought it was an incredible idea.”

She and her crew were pleased to learn Huntington Mayor Steve Williams was “very supportive” of the idea as well, Rader said.

After that, the only task was to ensure there were no extra costs associated with the green design as opposed to red, she said, which turned out to be the case, so long as the color is determined before the order is placed.

The engine, though not yet in Huntington, is practically complete, Rader said, and only requires the additions of certain tools, mounts and a hose before it is ready for action.

“Hopefully it will be unveiled by the end of June if no unforeseen circumstances come up,” Rader said.

Rader said she has been working with Marshall’s graphic design team to ensure the engine will accurately and effectively portray and represent the university.

“We spent a lot of time designing the truck based on what we felt our needs were for this station,” she said. “So it became kelly-green with everyone in agreeance that it would be wonderful.”

One of the graphics included in the engine’s design, she said, will be in remembrance of the 75 victims of the infamous 1970 Marshall football plane crash.

“My fire fighters asked to put a helmet with a ‘75’ on it somewhere,” Rader said. “That is one of their requests, and we plan on doing that.”

There is a strong sense of pride in Marshall amongst her crew, Rader said.

“All our fighters at the station are very proud of Marshall University,” she said, “and we, as a city, are as well, so we thought this [engine] would be a wonderful addition to Huntington.”

The engine, she said, will be replacing an 18-year-old engine, and will be expected to last the department anywhere from 15-20 years. The old engine will likely be refurbished and utilized as a reserve truck.

“We anticipate this [new] truck will last us a long time,” Rader said.

The engine and its crew will maintain all the same functions, duties and responsibilities as before and as with a regular engine, she said.

Not only is this collaboration between the Huntington Fire Department and Marshall University seemingly unprecedented, Rader said, but it is also a unique situation for the company constructing the engine, Spartan Motors, and their team were “very excited about it as well.”

“We are very supportive of Marshall, and they are supportive of our department as well,” Rader said. “I think this will create even more camaraderie between the city and university communities.”