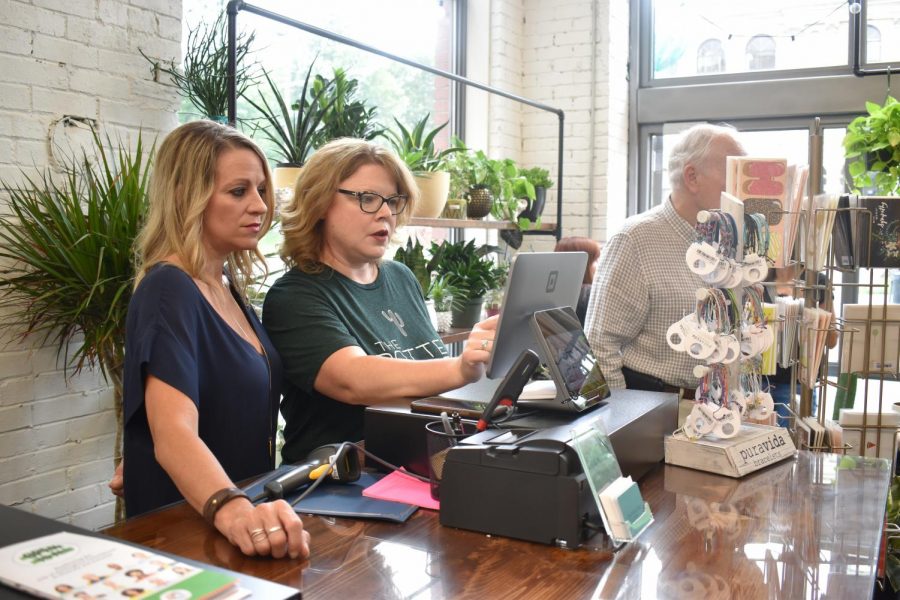 Wendy Canaday (right) and Lori Clary (left) working the register for their small business, The Potted Edge, in the progress building in downtown Huntington.

Three new businesses officially opened their doors inside the open space of the Progress Building in downtown Huntington on Saturday afternoon.

The Potted Edge, River City Leather and Lucky Cat Design Company have expanded from their original stores in Gallipolis, Ohio to join the Jewel City community.

Although the stores are new to the area, they aren’t new to each other.

“They’re already our neighbors,” Erin Buckley, owner of River City Leather, said. “They’re two doors down from us in Gallipolis.”

Buckley said when the owners of The Potted Edge, Wendy Canaday and Lori Clary, mentioned the open space in the Progress Building, she and her husband, Aaron Buckley, knew it was a perfect fit.

“This is a river city, too, so that works out,” Erin Buckley said. “We had a lot of people drive from Huntington to the shop in Gallipolis, so we thought it was a perfect match.”

River City Leather formed its roots after Aaron Buckley was injured in a motorcycle accident when the couple was living in Pennsylvania.

“We moved to Ohio, where she is from, while I was recovering,” Aaron Buckley said. “We had a local shoe repair shop in town and he [the owner] did custom leatherwork.”

Aaron Buckley said he began working for free in the shoe shop as a way to preoccupy himself during his recovery.

Putting his newfound skills to the test, Aaron Buckley made his wife a custom leather tote bag for her birthday.

“We posted pictures of it, and people started saying they wanted one,” Aaron Buckley said. “We started making bags in our shed and selling them online. In 2015, we bought the shoe shop in Gallipolis.”

River City Leather’s business was not alone in its humble beginnings.

“Lori and myself started doing this out of our home,” Canaday said of The Potted Edge, which specializes in plants and hand-crafted pottery. “We just had a love for succulents and cacti and started doing cute arrangements and people started to want to buy them.”

Canaday said she and Clary had their first pop-up shop in October 2017 and were blown away by the support.

“A storefront was available in downtown Gallipolis, but we were apprehensive to take the space,” Canaday said.

Elisha Meadows-Biland, who at the time was selling t-shirts out of her own pop-up shop in a local Gallipolis movie theater, said she was also looking to acquire a storefront for Lucky Cat Design Company.

“As it grew, I started thinking I needed my own storefront,” Meadows-Biland said. “But they were all a little too big for what I wanted.”

Canaday and Meadows-Biland agreed that both businesses could share a combined space in Gallipolis.

“We figured we could pull off the same thing here,” Canaday said.

All three stores are looking forward to becoming a part of the Huntington community and Meadows-Biland said they hope to contribute to the fresh narrative of the area.

“We got into this rut where we weren’t proud of where we came from and people wanted to leave,” Meadows-Biland said. “But now we are bright spots and people want to come to these smaller towns because they get the feel that people care here; it’s community based, and they feel welcome.”

Meadows-Biland said she is excited to see what’s to come for the new shops on 8th Street.

“I hope that we can be a part of the pride that people take in Huntington,” Meadows-Biland said. “If our store can be a bright spot in Huntington, then I feel like we’ve done our job.”