Students take a bite out of Viking culture 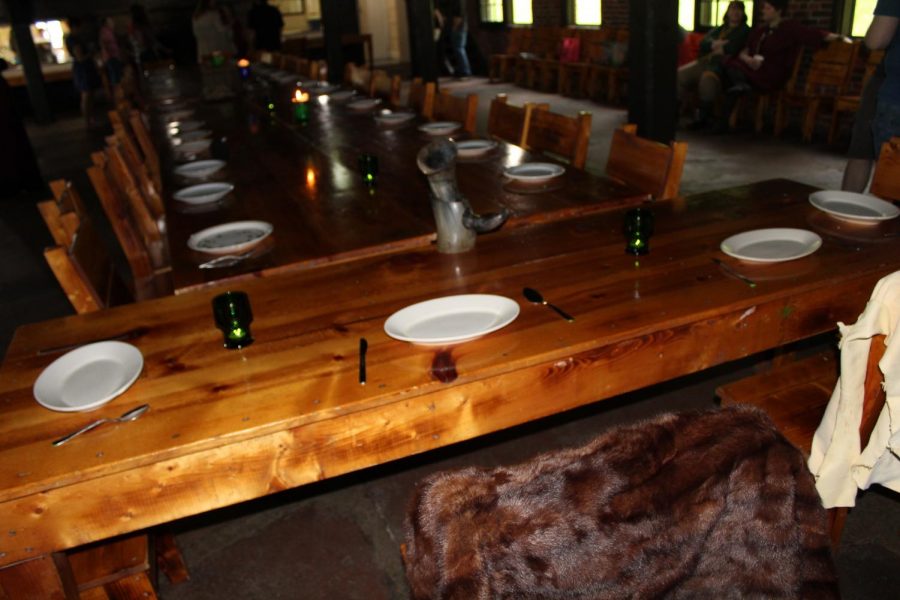 The Head Table, where important guests were seated.

During the feast, guests of honor—faculty members of Marshall University’s history department—set at the head table, underneath the chieftain’s banner and realistic Viking swords. Traditional food, including lamb, salmon, porridge, stew, homemade cheese and bread, was served.

This was Diener’s third time organizing the Viking Feast, and she said it was not always the final project for the class.

“A huge part of Viking culture is feasting,” Diener said. “That was how they celebrated community, and there’s a lot of descriptions of feasting in the sagas. So, I kind of threw it out to the class one day, and they got so excited by the idea that now it’s become like an integral part of the class.”

Diener said one of her favorite aspects of the feast is the food, as well as seeing the different ideas students come up with. Students were allowed to be as creative as possible for the feast, she said, with some making homemade, authentic gifts as well.

“Students have a lot of choice in what they do,” Diener said. “A bunch of them cook. But some of them also have produced traditional crafts, like weaving, or they’ve done blacksmithery. When people are arriving (at the feast) they look at the things on display.”

As part of the feast activities, there was also Viking entertainment, including storytelling, singing, dancing and recitations. At the end of the feast, gifts were given, which is another Viking tradition that Diener and her students followed.

“Because feasts were an important part of the community, they were an opportunity for people to build networks,” Diener said. “They tended to do that by giving each other gifts— a lot of times jewelry, including rings; gifts of metal; sometimes valuable clothes, like a fur cloak, or something that was made of silk; or really valuable weapons like a sword with a beautiful scabbard.”

This is the end of Diener’s eleventh year at Marshall, and she said the Viking World class she created is very popular.