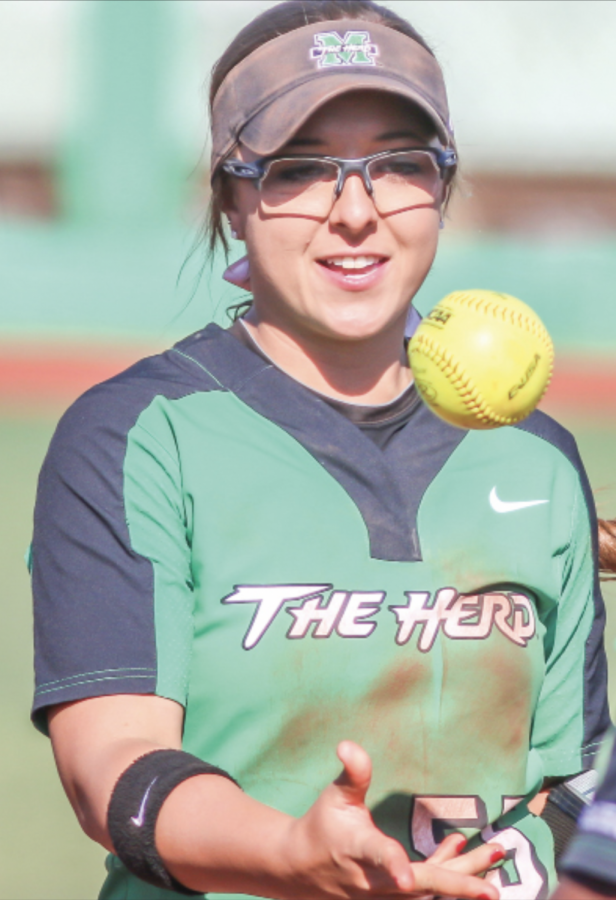 Marshall third baseman Blakely Burch (55) flips the ball to a teammate after recording an out during the Thundering Herd’s doubleheader against Morehead State at Dot Hicks Field on April 11, 2018. Marshall is currently 19-7 through its first 26 games of the 2019 season.

The Marshall softball team extended its winning streak to five straight games after sweeping the Morehead State Eagles Tuesday in a doubleheader matchup, 11-1 and 11-3, with both wins coming in five innings.

The Herd’s record improved to 33-17 overall and the Eagles dropped to 2-39. Morehead State’s losing streak was stretched to 25 games, with the Eagles’ last win coming on March 17 against
St. Bonaventure.

In the first game at the top of the first, Aly Harrell hit a homerun, her 13th of the season, while Briana Daiss added a two-run single to give the Herd an early 4-0 lead. The Herd never looked back.

Marshall continued to lead over the Eagles through the second and third innings 4-0. In the fourth inning, Blakely Burch singled and scored Mya Stevenson and Rachel Pennington, giving the Herd a 7-0 lead. Sierra Huerta doubled to left center and Burch scored to up the Herd’s lead to 8-0. Hayden Ellis hit a two-run home run and scored Huerta for a 10-0 lead.

In the bottom of the fourth, Morehead State found its way on the scoreboard as Peyton Slater grounded out to shortstop and Aubrey Bennett scored the Eagles’ lone run of the
first contest.

The Herd closed out the first game in the fifth inning when Stevenson singled up the middle, Harrell advanced to second and Armani Brown scored, closing out the scoring. Abigail Tolbert went the distance in the game and improved her pitching record to 21-13.

In the second game, Kailee Williamson stepped in to pitch for the Herd and pitched a complete game to earn another win, improving to 10-3 on the year.

In the first inning, Harrell doubled to center field, which scored Armani Brown after a fielding error by center fielder Aubrey Bennett. Stevenson followed by hitting a two-run home run that scored Harrell, giving Marshall a 3-0 lead. Burch hit a solo shot in the first inning to extend Marshall’s lead to 4-0 through a half-inning of play.

In the second inning, Stevenson hit a double that scored Brown and Huerta, upping the lead to 6-0. Rachel Rousseau followed with a three-run home run to center field, scoring Stevenson and Harrell for a 9-0 lead. Hannah Giammarino hit a single that, following an error, advanced Chloe Lee to third and plated Ellis for a 10-0 lead. Harrell was walked with the bases loaded in the same inning as Huerta advanced to second, Giammarino to third and Lee scored, marking the last Marshall run over the game and extending the lead to 11-0.

Morehead answered in the bottom of the second when Sara King hit a single and Helyna Bissell scored the team’s first run, 11-1.

In the third inning, Sarah Hallock scored for the Eagles when Kalle Coleman bunted on a fielder’s choice, 11-2. A double-steal plated the Eagles’ final run of the contest.

The Herd returns back to Dot Hicks Field Wednesday for its last midweek matchup of the season against the Pitt Panthers. Visiting Pitt enters the midweek matchup with a record of 9-41 after being swept in a three-game series against Atlantic Coast Conference opponent Notre Dame. First pitch is set for 2 p.m.

Marshall’s last home series of the season begins Saturday afternoon with a doubleheader against Florida Atlantic starting at 1 p.m. The Herd and Owls will close out the regular season Sunday at noon. Marshall needs one win during the series to clinch a top-four seed in the conference.