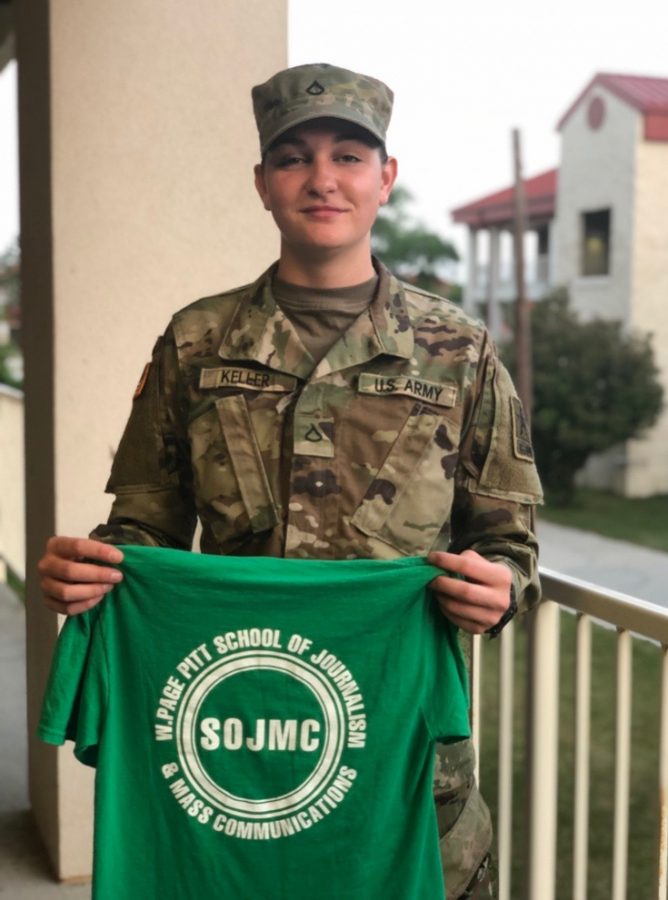 Meg Keller, a soldier in the U.S. Army, is also a journalism student at Marshall University.

Meg Keller, For The Parthenon

I’m having an identity crisis. I don’t know if I’m a journalist or a soldier anymore. In an attempt to incite some humorous rhetoric, I did change my twitter name to “Journalist Soldier Meg,” but truly, who am I these days?

For the last three years I have pursued my education in a now beautifully familiar city that will be my true home among the mountains forever. Huntington and Marshall University presented me with opportunities that have guided and watered the growth of my adult life. From beginning as a health science major while being a manager for the women’s basketball team in 2015, to sitting in a classroom nearly 500 miles away at Fort Gordon, Georgia in rough Army greens, Marshall has remained my root mentor. I “officially” became a U.S. soldier in mid-March after 10 weeks of relentless exhaustion and incessant testing of my patience. The Army is a lot like college and Marshall in a way, but also quite different. For example, the phrase “column right…” is a preparatory command given to an element of soldiers to indicate what direction to turn while marching. That is soldier Meg thinking. But “column write” to journalist Meg means I’m likely very tired, too tired to form a syntonically correct sentence indicating I need to write a column for The Parthenon.

If I had a dollar for every minute the Army has forced me to “hurry up and wait” for, I would be able to pay off my student debt. College taught me the importance of time management and patience, but the Army tested it. Luckily, I’ve gone to an accredited university. The relationships in the Army equate to many of my class friends I’ve made in college without any threat of replacing them. Carrying my battle buddies during our 10-mile ruck marches parallel to carrying my pals home from late Fourth Avenue nights, kind of. At my basic training company my bay was on the third floor of the building. To say we ran up and down those flights of stairs hundreds of times would be an understatement, but I did find some comfort knowing my Herd back home was huffing up the stairs of Corbly Hall as well.

The military life is quite different than leisurely college life. Now that I’m trained to, I’d kill to have an 8 a.m. class because eight is much better than my usual 3 a.m. I can also guarantee Marshall has a better rec facility than any Army gym I’ve seen. There is a cadence in the Army that denotes the coffee being “mighty fine,” despite looking like muddy water and tasting like turpentine; and although Harless coffee sometimes resembles weak bean water, it’s still better than DEAC coffee.

The Army and Marshall have influenced my character and entire life forever, and switching my mindset between the two has been quite the struggle. I feel lost here in Georgia most days. Like I am on autopilot. Unlike the consistent mental and intellectual stimulation of college, the military mindset nearly feels as if I have to not think, to turn my brain off and coast through the day. Sometimes it is better and nearly necessary to not know the why behind orders given. I recall a trainee asking why our blood type is engraved on our dog tags and feeling the potential reality of detrimental danger once I learned the answer. My point being, the mindset necessary for the military is not one that can coexist without struggle for self identity and individuality. This is why soldier Keller and journalist Meg have been going at it lately. With that being said, I am equally content and prideful in both titles.

History tells us that for freedom to survive it must be defended, and if lies are to stop, they must be exposed. Luckily, as a journalist, soldier, Meg, I am in the business of both. I leave my Herd with this: Home doesn’t have to be where you were raised. It can be a place or your people. Wherever you grow. Marshall is home for me and maybe you too. I may be homesick and mildly brainwashed, but I ache to remember the heat of the fountain’s marble barrier beneath my legs on a spring afternoon on campus. Make the most of your life’s journey no matter where it leads. There is experience and wisdom to revel in through success and pain alike.