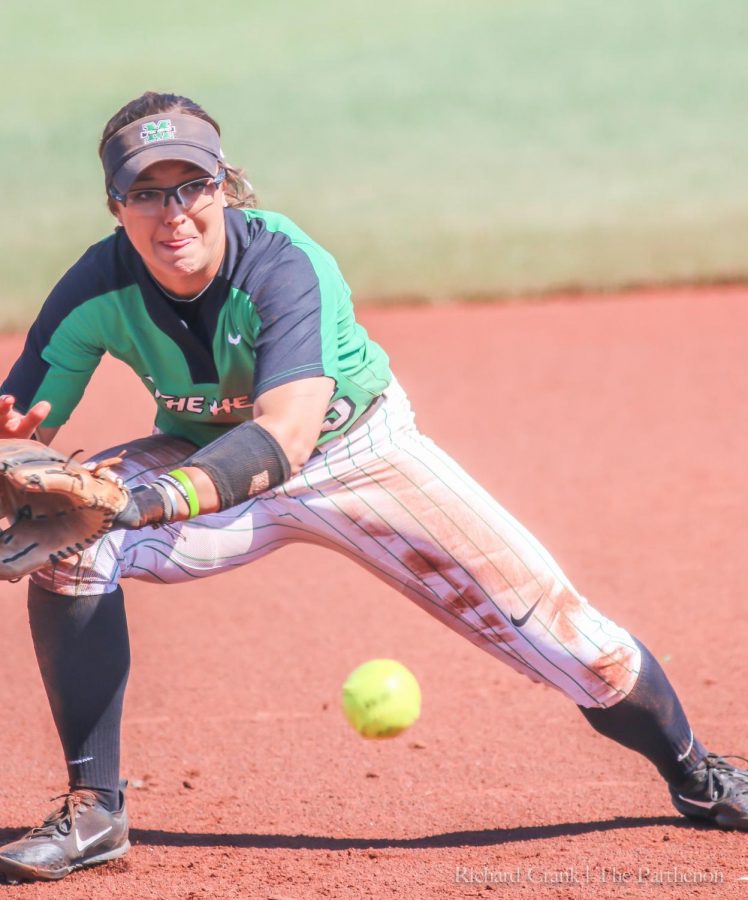 Louisville scored all five of its runs in the final three innings, including a pair of two-out runs in the seventh inning, to defeat the Marshall softball team Tuesday afternoon, 5-4, at Dot Hicks Field in Huntington.

Marshall took a 4-3 lead into the final inning after Mya Stevenson’s 10th home run of the season in the sixth inning, a two-run shot to left field, but the visiting Cardinals recorded a trio of two-out hits to plate two and take the lead. Sidney Melton hit a triple to score Celene Funke and Megan Hensley doubled to score Melton.

The home team took an early lead in the game on Aly Harrell’s team-leading 12th home run of the season, a one-out, two-run shot to center field.

Louisville ran itself out of a potential big inning in the third when Maddy Newman overran the third-base bag following a double by Funke and was tagged out attempting to score. Melton grounded out to second baseman Armani Brown to eliminate the Cardinals’ scoring opportunity.

The Cardinals tied the game in the top of the fifth inning after scoring a pair of one-out runs. Newman singled and advanced on a fielding error by Brown, which scored Paige Schindler. A groundout by Funke scored Charley Butler from third base to even the score at two runs apiece.

Louisville took its first lead of the contest in the top of the sixth inning when Rebecca Chung hit a solo home run to left center with two outs in the inning. Chung’s home run was her fifth of the season. Stevenson’s one-out, two-run homer in the bottom half of the inning gave the lead back
to Marshall.

Freshman Taylor Roby earned the win for Louisville after pitching the final two innings in relief of Hensley and improved to 13-1 this season. Tolbert pitched a complete game for Marshall and fell to 17-13 this season. As a team, the Cardinals improved to 32-15 this season while Marshall dropped to 28-17.

The Herd returns to action Saturday with a doubleheader at Middle Tennessee starting at 3 p.m., followed by a single game Sunday at 1 p.m. Marshall’s next home game is May 1 against Pitt at 2 p.m.

Kieran Intemann can be contacted at [email protected]