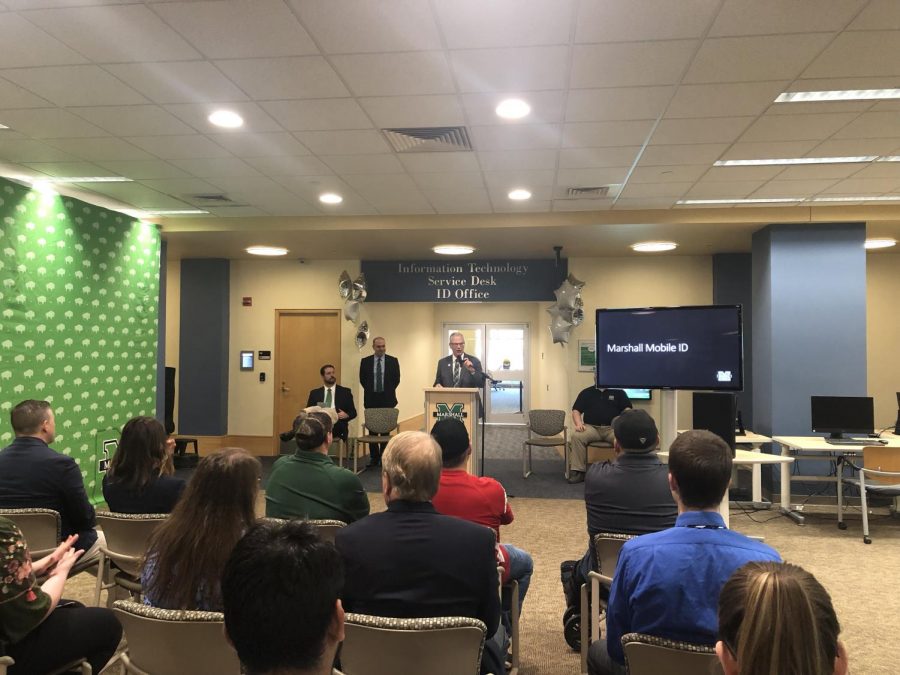 President Jerry Gilbert expressed his pride in Marshall for being one of only ten schools across the country that allows access to identification cards through mobile devices.

Marshall University became one of ten schools across the country, and the first school in West Virginia, to implement the access of identification cards through Apple iPhones and Apple Watches Tuesday.

Marshall and the Information Technology (IT) Department partnered with Blackboard Transact and Apple Pay, along with the West Virginia State Treasurer’s Office, and Bob Dorado, Campus ID Office manager at Marshall, participated as the lead in the local project.

“It’s something we’ve expected for a long time,” Dorado said. “Since the advent of the iPhone, we just always felt that’s the way IDs would move toward. When Apple Pay started getting more prominent, we kind of assumed that was the direction it would go. We’ve always been on alert for it.”

Students on campus will no longer have to search for their ID cards in backpacks, wallets, purses and other places, as it will all be available with the new technology.

Students are able to place their phones near a reader anywhere on campus that reads physical MUIDs.

They are able to enter residence halls, the Marshall Recreation Center and libraries, make purchases for food and books, print anything needed for school and more.

“It shows that Marshall is a real leader in what we are trying to do to advance our uses of technology,” Dorado said. “Smartphones, Apple Watches are so mainstream today. Everybody has their device all the time, so it’s just a convenience to be able to use that as an ID.”

Students can visit the Campus ID Office in Drinko Library to help set up the process of using their IDs in Apple Wallet.

Marshall President Jerry Gilbert expressed his gratitude for Marshall and its accomplishments.

“I am so proud of Marshall University,” Gilbert said. “It continues to be a leader in the state, and also in the entire country, in offering our students technology in convenience on campus.”

Marshall Mobile ID is currently available to Apple users only, but Android will soon follow the trend, Dorado said.

“We are a forward-looking university,” Gilbert said. “A university on the rise. And I am excited that we keep finding ways to lead the pack here at home and nationally.”