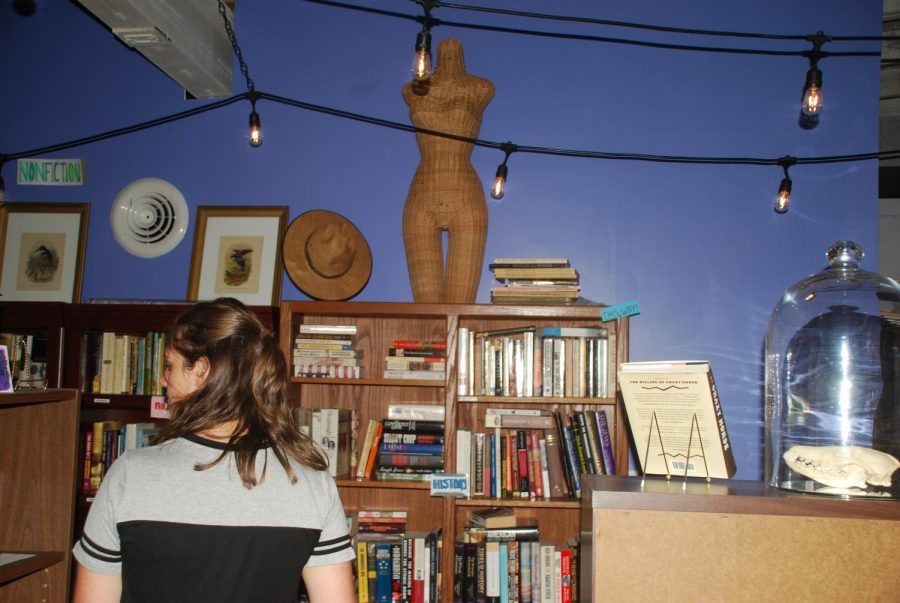 Amber Sturgill searched for her next potential read at Cicada Books and Coffee which opened in July 2018.

To buy and sell locally is the mission of a Huntington book and coffee shop that is trying to re-energize the West End.

Rebirth is even in their name. Cicadas are a metaphor for new life in a way that is really interesting because there is the association of a rebirth of things, said Katie Norman, co-owner of Cicada Books and Coffee.

Norman and her mom opened the shop July 2 of last year. The two said it was always a pipe dream of theirs. The mother-daughter duo found the building in the west end of Huntington and realized that it was something that could be a reality.

“Cicada is just a nice word, it is memorable because it sticks out in people’s minds,” Norman said.

Shopping locally allows owners and community members to be passionate about their businesses rather than just having a chain restaurant with the same receipt.

“Cicada is special because there aren’t a lot of local coffee shops left in Huntington,” said Becca Craig, a Huntington resident. “It is nice to support a local business, as opposed to a corporation like Starbucks. The Instagram page popped up in my suggested feed, which is how I found out about it. I also saw a couple of friends posting pictures from there and thought I had to go.”

Norman said local businesses allow the shops to shape the community they are in.

“Any independent shop is different just because it is personal, it is unique,” Norman said. “We buy local coffee, most of our furniture is from antique stores on the street. It is very local and, of course, it is going to be unique just by the nature of the thing, and I think people like that. I think people like coming somewhere that has an interesting atmosphere, as opposed to just a chain restaurant.”

Craig said the atmosphere of Cicada Books and Coffee is “perfectly curated to reflect Huntington and the uniqueness of the Old Central City antique district.” Craig said it feels good to support a local Huntington business.

Norman and her mom bought books in bulk for their initial stock, but as the business flourished, people began donating books for in-store credit. The business gets around 500 books a week.

Cicada also sells pastries from the Camden Corner Market and Paula Vega Cupcakes. They will sell bagels, as well, starting this summer.

“It was just about making something cool in Huntington that people would like and try to be a part of, because I really want to see Huntington succeed,” Norman said.

The shop was originally going to be called Orange Books, named after a poem Norman really loved, but it was decided to go with the name Cicada instead.

Cicada Books and Coffee is located at 604 14th St. West in Huntington.

Anna Marsh can be contacted at [email protected]