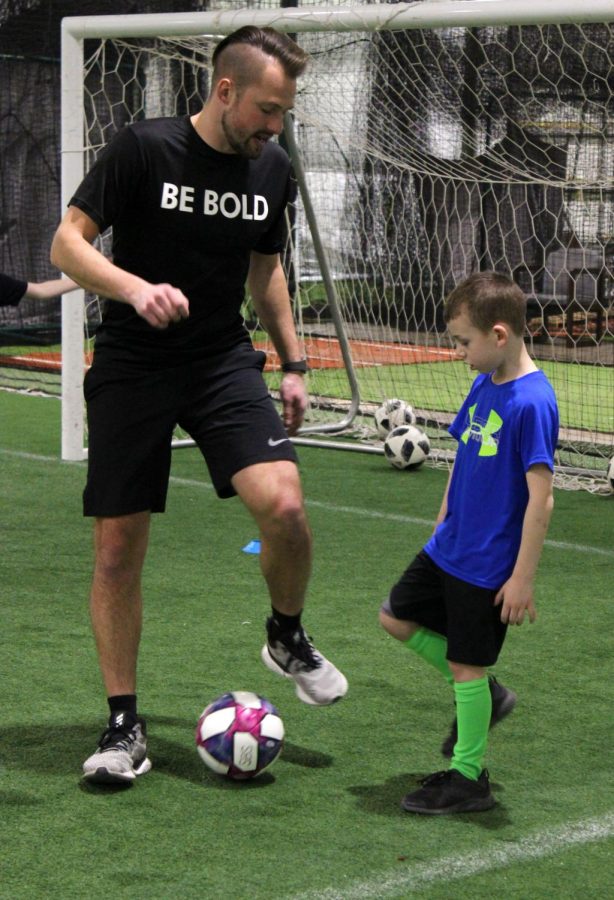 Kyle Sniatecki teaches clients how to do an exercise at a training March 11.

One Marshall University graduate is creating opportunities for young athletes in a community he did not grow up in, but in the community he said has greatly impacted his life while getting his undergraduate degree.

Kyle Sniatecki, who is originally from Buffalo, New York, came to Marshall on a soccer scholarship to study marketing and management. He said he realized the connections he built while at Marshall could help him launch a business in something he is passionate about.

“I mean, somebody who’s seven hours away, coming from a big market in New York, you know, probably could have went back there,” Sniatecki said. “But the fact that through Marshall, through the athletic program, through the relationships I’ve built, I saw an opportunity, and I saw potential in kind of starting my own thing right here in Huntington.”

Sniatecki opened a soccer training business, called Soccer by Sniatecki, in February 2014 after noticing soccer players in the community needed a consistent training presence they may not get through local leagues and teams.

“As far as the training side of it, there wasn’t really anybody facilitating that here,” Sniatecki said. “You could play on a club team; you could play on a team at the Y(MCA). But as far as if you wanted to get soccer-specific training that was high quality and that could be customized to that specific age range, or that specific player, nobody was really doing it.”

Through the business, participants, starting from age five through college-age, can partake in individual training, small group training or team training, catering the skills and exercises to each group.

“So, facilitating those groups of anywhere from two to six, and focusing in on just various skills of the game, so ball control, passing, shooting, dribbling, defending, attacking, really focusing on activities that allow you to improve, but most importantly game realistic,” Sniatecki said.

Sniatecki also created a soccer league in Kentucky called Eastern Elite Soccer Academy for girls and boys between the ages of nine and 18. Although based in Kentucky, the club also includes players from Ohio and West Virginia.

Between juggling Soccer by Sniatecki and the Eastern Elite Soccer Academy, Sniatecki said finding a way to handle it all can sometimes be difficult, but it is all worth it.

“There’s really not a balance, which I’m okay with,” Sniatecki said. “I think, for me, I just enjoy all of it, right? Whether that’s a young kid that I’m working with, whether that’s a team I’m working with, whether that means, you know, traveling to Cincinnati for a game to coach, all of it is part of it. And I embrace the change with it. I embrace the long hours with it, because, at the end of the day, I’m getting to do what I want to do.”

Sniatecki is not alone in his training and coaching, but his staff includes three other trainers for Soccer by Sniatecki, including Brady Raymond, Brandon Stacy and Karson Boyce.

“Most importantly, myself or my staff, we’re having a direct impact to what’s going on here in the community and a positive impact,” Sniatecki said. “The text messages, the calls, all the time and effort that’s put into it, in my mind, is worth it. And I think you got to find little joys within those long days, that make it worth it… But soccer has really kind of just been my identity, really, for all of my life.”

When players are ready to move on to college soccer, Sniatecki offers guidance through his personal experiences of college recruiting.

“I’ve been thankful enough to go through that process, and it’s a grueling process, especially for somebody who hasn’t gone through it, who doesn’t know how to communicate with a coach, how to put together highlight film or really how to promote or market themselves,” Sniatecki said.

Sniatecki said he is always looking for more trainers and coaches and would like to offer more Marshall students and graduates internships and/or jobs.

“If I can help Marshall grads or I can help people that are going to Marshall right now, I want to do that,” Sniatecki said. “I want to be invested in the community, and just like people gave me a chance, I want to be able to give back.”

Soccer by Sniatecki is located at 2240 5th Avenue in Huntington.