Students travel to Bolivia to serve over spring break 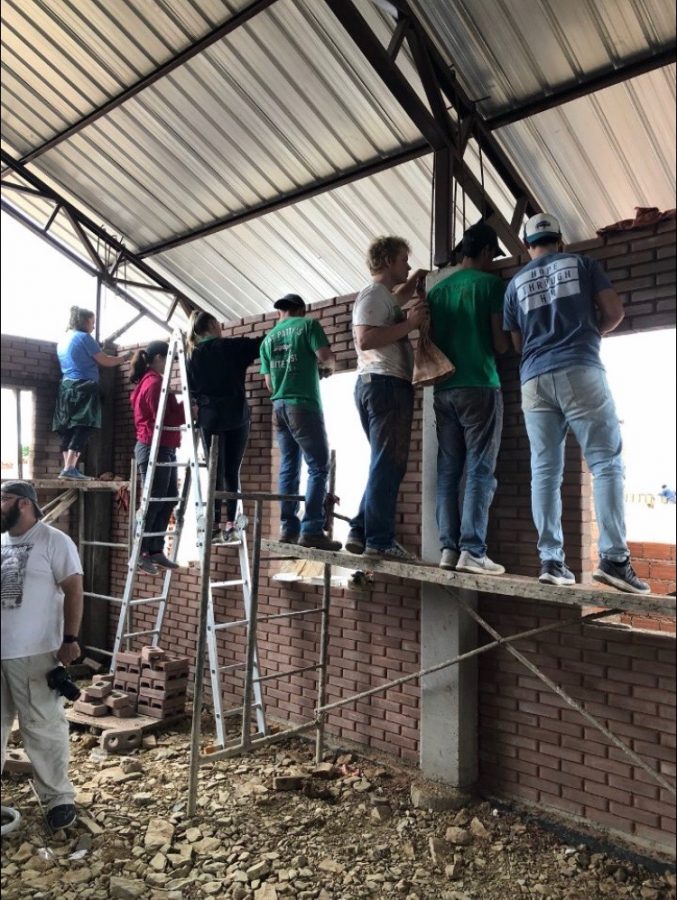 BCM Members help grout walls for a church being built in Cochabamba, Bolivia.

Members of the campus ministry Baptist Campus Ministry, BCM, spent spring break in Cochabamba, Bolivia working with the organization House of Hope to serve a community in need.

The week was spent helping and connecting with the Quechua community in Bolivia, said Sandra Clay, a sophomore international business major.

“Our main work was building a church in the Quechua community,” Clay said. “Groups before us have worked on it, so we picked up where they left off. We put grout in between the bricks and made it weatherproof, as well as aesthetically pleasing.”

Before the community received help from missionaries and BCM, a building for a church was not there. Tatum Ferris, a sophomore elementary education major, said this was the reason for the group to build a new one.

“We assisted in building this church for the Quechua people because their community, originally, which is about 270 church members, were meeting under a tarp every time they would get together,” Ferris said. “Outside of one of their houses there was this open piece of land, but it wasn’t very big, and they put a tarp over it to keep them out of the winter.”

House of Hope created a simple way to build structures that even those without prior knowledge of construction could do, Ferris said.

“Basically, what happened was the organization designed this brick that they could lay as Lego blocks, so it was very easy to assemble,” Ferris said. “They laid the brick on three walls, and we grouted.”

Time was spent not only building the church, but also connecting with the community, despite the language barrier, Clay said.

Even though the days were long, and each day gave BCM members an array of challenges, they were still able to enjoy their break, said Alayna Gutherie, a sophomore health sciences major.

“Our typical day, throughout the week, was wake up, have breakfast and go straight to the work site, and we would work all day and then come back and have dinner,” Gutherie said. “One evening, we went out for ice cream, one night, we went to the park and played soccer or we would do nothing and just relax.”

Through the work, socializing and evening outings, Ferris said her favorite part of the trip was the relationships she made with community members and the joy they had.

“We built so many relationships with the people, even though there was a language barrier,” Ferris said. “We were able to build those relationships with people, especially the children. They absolutely loved it. Every time we got off the bus there, they would run to the doors because they were so excited to see us and that was awesome. It was really cool to see that even though they had very little, they seemed to be the happiest people I had ever seen.”

Gutherie said the happiness and gratefulness the community members had was unlike anything she had ever seen and changed the perspective of her own life.

“The fact that we were able to help them, and seeing how grateful they were for that, even though they were perfectly content with where they were, was beautiful,” Gutherie said. “To see that they were so okay with where their church was, and where they were worshiping, made me have a kind of reality check. I do not need all these things to be happy. I do not need to be in the most beautiful church building to worship, but can stand underneath a tarp by myself or three other people and do the exact same thing.”

A love that stretches miles and finding joy in the simplest ways is what Ferris said she hopes was achieved during the trip for fellow students and Quechua community members.

“As for the students who went with us, I hope they were able to understand that happiness comes from a very simplistic form, all the time, and you do not have to have a lot to be joyful and to smile about things,” Ferris said. “I hope for the people of the church to understand that people who are even 4,000 miles away love them and care for them and that they all understand that we are one big family.”

With her first international mission trip under her belt, Clay said she hopes to do more.

“In high school, my church youth group would go on a mission trip around America every summer,” Clay said. “I fell in love with serving and always wanted to serve internationally. When the opportunity came up, I knew I wanted to go. I would love to go on more international mission trips. God has blessed me with the gift of knowing different languages. If I can use that to further his kingdom, I will gladly go and serve.”

Meredith O’Bara can be reached at [email protected]