People are laughing at Coseri, but that’s the point 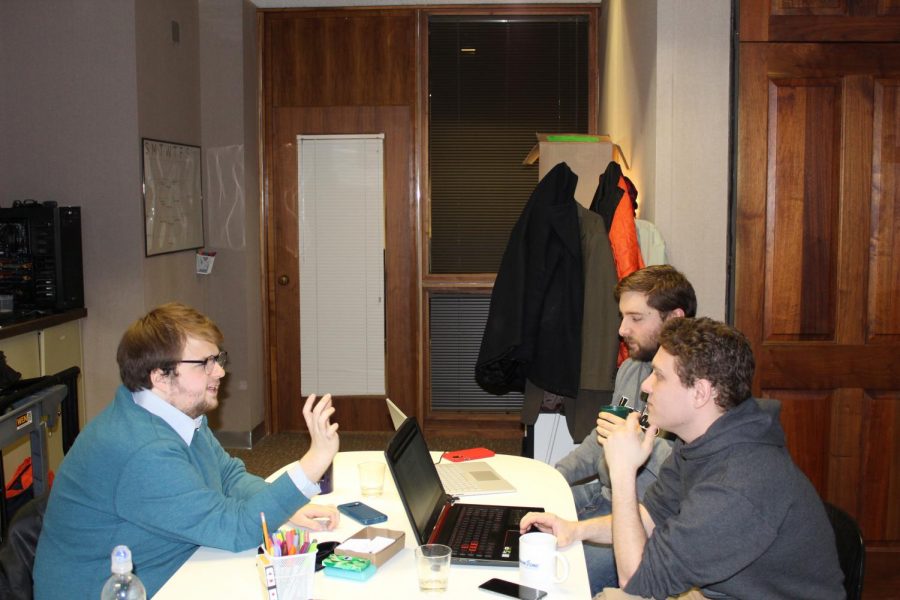 “Work like a company and promote like a band” is Nate Cesco’s business model for Coseri, a Huntington-based sketch comedy group. From writing and producing a feature length film, to producing and filming a talk show and creating more sketches and web series, Coseri members will continue to be busy the next few months, Cesco said.

Since August, Coseri members Cesco, Cody Lambert, Nathan Thomas and Liz Northcote have been writing, producing and publishing more content than ever before, including short films, holiday specials and a web series about the new Fallout game.

Northcote now lives in Maine, where she is attending graduate school, but Cesco said she still regularly helps the Coseri team. For a time, Cesco and Lambert lived in Chicago, but they still worked as closely as possible with Coseri until they both moved back to Huntington last year.

“So far I think the last few months since I’ve come back from Chicago and so has Cody, it’s been building; that’s one of the reasons I came back,” Cesco said. “Chicago is a great comedy city. Cody went up there with me for a little bit, and he came back before I did. And I was like, ‘If I’m here, you’re there, we have another writing partner, Liz, who was going to Maine, and it’s like, if we’re all in different places, this thing falls apart. Do we believe in this thing?’ We both said yes, so I came back, and we started making stuff in August again like really regularly. We’ve put out more since August last year than we did the years before.”

Coseri’s name is a mashup between “comedy” and “series,” and Cesco and Lambert created the group about four years ago. The pair met while performing stand-up comedy together, but Cesco said they knew they wanted to stand out from other sketch comedy content creators.

“We didn’t want to be just another sketch comedy YouTube, we want to make web series; we want that to be the foundation of what we do,” Cesco said. “So, this web series coming up and this feature are positioning us to do that. I just think like we’re in that golden age of television still, where it’s like Netflix just dropping a series is a thing. And if we can scale that down to what we can make in Huntington and make a five-to-ten part web series every so many months, I think there’s an audience for that.”

Cesco said Coseri relies on help from the community, and he loves to support other local artists. Their office space, located in the CoWorks building in Huntington, has an entire wall dedicated to merchandise from local artists and businesses.

“I don’t think Coseri would exist if Black Sheep didn’t exist,” Cesco said. “One, that’s where I met Cody doing stand-up comedy there. Two, the staff there is so ridiculously nice to let us use their kitchen, their staff and time. We’ve had a lot of quesadillas and chicken and waffles writing stuff there.

“I think if there is one thing I do want to stress, it’s how ridiculously down people are to collaborate in the area,” Cesco said. “People are just really excited that artistic things are happening, so there’s no sense of competition. Everybody wants to contribute to each other’s work. People are just excited to make things, and I think that they’re excited for us to make cool things. That’s something that from what I’ve seen is uniquely West Virginian and unique to Huntington too.”

Cesco said one of his goals for Coseri is working hard enough so that it eventually becomes a full-time job for its members. They are also working on launching a website and other side projects, such as a comedy tour for Lambert.

“We have a lot of content, and I think what we’ve learned in the last few months especially is if we really buckle down and grind it out that we can make it, and some of the stuff has gotten really good responses,” Cesco said. “The eventuality is figuring out how do you associate money with that. Not that the goal is to make money; the goal is that I don’t have to be a social media strategist for another company and Cody doesn’t have to teach.

“We have features that we want to do,” Cesco said. “Cody wants to tour and do stand-up; I want to keep making web content and figuring out a way to monetize that, so we can just do that all the time and then make more and feel content in our lives. We’re not trying to get rich or have every person on the street watch us. I just want to be able to wake up and the first thing I think about is the video we’re making that day or the project that we’re in and then not be hungry by the end of the day because I did that.”

Cesco said Coseri is open to collaborating with others, and anyone interested in helping with or being in a sketch can reach out to them.

“All the time we get messages on the Facebook page,” Cesco said. “I literally got a message from a restaurant the other day, it’s like ‘I like your stuff, if you want to film in our restaurant you can do that.’ It was really nice of them. And then I’ll have people like ‘I want to be in things.’ So just approach us and say like, ‘Hey I want to talk.’ You can always message us on Facebook, either me or Cody Lambert or the Coseri page directly, and we can figure out something.”

Cesco said he began creating sketches in high school, and some of his biggest comedic inspirations are late night talk show hosts. Along with Coseri, Cesco is associated with Huntington Comedy, a group of performers who deliver stand-up comedy at Black Sheep every other Wednesday and at occasional pop up shows across Huntington. Cesco said many members of Huntington Comedy also help Coseri with various filming projects.

“I love sketch comedy, and I started making sketches whenever I was in high school,” Cesco said. “And then when I started my first semester at Marshall, I went and did comedy at Black Sheep because they had the regular open mic there, and I did it intermittently for a few months. And starting in 2014, I started hitting every show. But I’ve been making sketches since I made little silly videos with my friends in middle school and then let’s try to make a sketch comedy YouTube.

“I got into it just because it’s ridiculously rewarding to make people laugh,” Cesco said. “It’s the coolest thing. It feels a bit like a superpower. Just coming up with some ideas or some insane premise that people enjoy is great.”