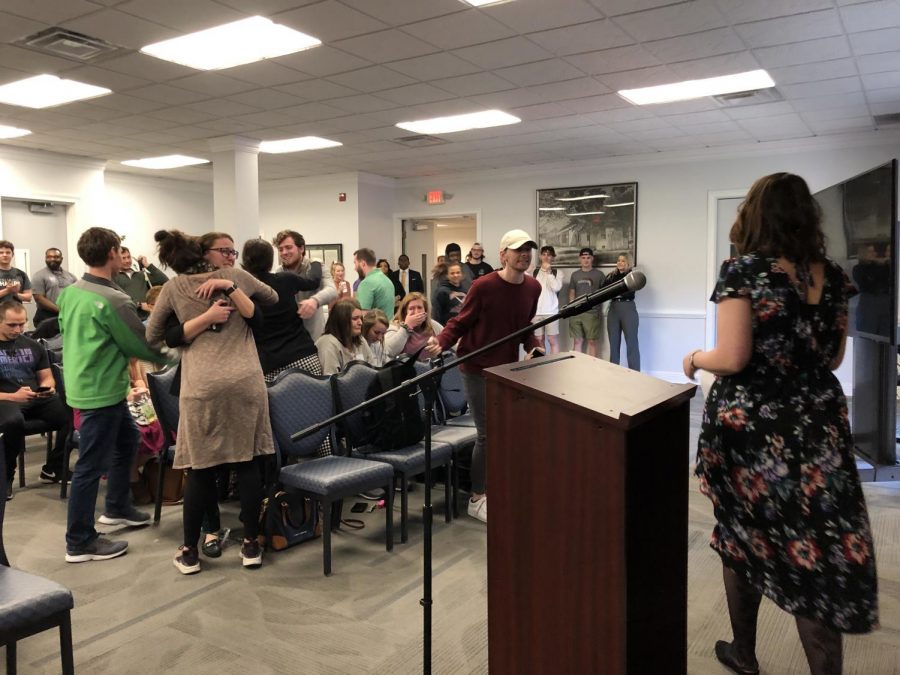 Members of the Rogner-Williams team and other students react to the announcement of Stephanie Rogner and Anna Williams being elected as the next student body president and vice president of Marshall University.

The preliminary results of the 2019 Student Government Association Elections, concerning student body president and vice president, senators and referendums, were announced Wednesday, during a reveal at 5 p.m. in the Shawkey Room of the Memorial Student Center.

In the category of Student Body President/Vice President, of 2,462 total votes cast, Rogner and Williams received 1,495 votes, Jeremiah Parlock and Caitlin Kirk received 944 votes and a currently unnamed write-in received 13 votes, according to a printed election details report from SGA.

Following the announcement of the preliminary election results, Rogner said she was feeling “overwhelmingly excited.”

“I’m literally already ready to start my day one,” Rogner said. “All I can say is I couldn’t have done it without not only my cabinet but everyone who has supported us. That’s over 1,000 people who believed in us. I’m just ready to take on all of our platforms now.”

Also following the announcement of the preliminary election results, Williams said there was “just a lot of emotion.”

“I’m really proud of Stephanie and our team, and it just feels awesome,” Williams said.

“I would just say, thank you to everyone who believed in us. I look forward to representing over 13,000 students, and I’m just excited to start these projects that Anna and I have just poured our hearts into already,” Rogner said as a message for the student body.

Williams said she would like to thank the student body for “recognizing the passion behind Stephanie and I and our team.” She said she is excited to represent Marshall and grateful for the position she has been elected to.

The individuals who were elected to represent students within Marshall’s colleges as SGA senators were also announced Wednesday. These senators and the colleges they will be representing are as follows:

Several colleges only had write-in votes. These colleges, whose candidates will be announced later on, according the SGA election details report, were as follows:

Also announced Wednesday, as part of the preliminary election results, four referendum items on the 2019 SGA ballot were passed, including a resolution to update a position title and correct formatting in the SGA Constitution, a resolution to revert the GPA requirement for student body presidents and vice presidents from 3.25 to 3.00, a resolution to create a SGA judicial branch and an approval of the amended SGA executive branch bylaws.

Though they were announced Wednesday, the results for the 2019 Student Government Association Elections will not become official until after seven instructional days have passed, said Andy Hermansdorfer, Marshall’s director of student involvement and leadership.

This gives the Election Commission an opportunity to investigate and look into any complaints/irregularities reported, if an individual contests the results, and to make sure the process was fair, Hermansdorfer said.

The last day to contest the 2019 Student Government Association Elections election results, by filing an irregularity, will be April 5, Hermansdorfer said.

Jesten Richardson can be contacted at [email protected]