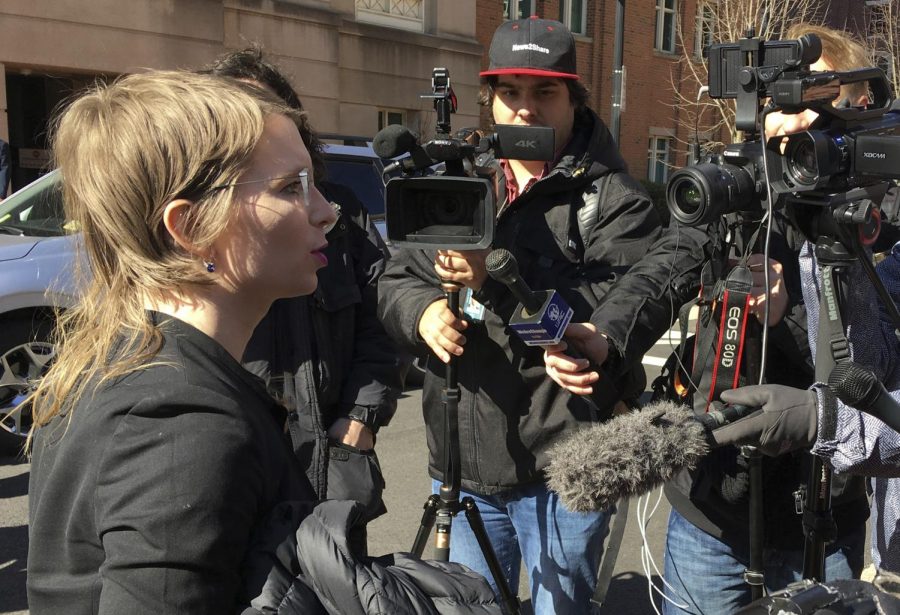 In this March 5 photo, Chelsea Manning addresses the media outside federal court in Alexandria, Virginia.

As of Wednesday, March 20, Chelsea Manning, a former intelligence analyst for the United States Army, has been imprisoned for 12 days because of her refusal to testify in a grand jury hearing against international non-profit organization WikiLeaks.

Nearly a decade ago, Manning, after joining the army, experienced a disconnect between the reality of war on-the-ground and the situation being portrayed to Americans by her own military’s newly-embedded journalists, said Naomi Spencer, a Huntington resident and member of the Socialist Equality Party, at one of a series of recent public meetings organized by the party to raise awareness about whistleblower persecution.

In 2010, informed by Manning, who was stationed in Iraq, WikiLeaks, a publication founded by Julian Assange in 2006 to publish information relating to war and corruption that would typically be censored, published classified documents which had been denied and opposed by the New York Times and the Washington Post and exposed war crimes committed during the U.S. invasions and occupation of Iraq and Afghanistan.

For exposing war crimes committed by her country and for which officials in her own government were responsible but never held accountable, Manning was sentenced to 35 years in prison under the Obama Administration and subjected to torture methods including prolonged solitary confinement before being committed after spending seven years in a maximum-security prison, Spencer said.

Because of the Trump Administration’s attempts to charge Julian Assange and WikiLeaks with espionage and conspiracy, Manning was summoned to testify before grand jury, March 7, when she responded to each question by saying it violated her constitutional rights, and she was correct to do so, Spencer said. Each of the questions Manning refused to answer concerned her previous contacts with WikiLeaks regarding previously leaked materials and had already been addressed during her 2013 court-martial, Spencer said.

Manning was offered immunity for her testimony, Spencer said, but she refused, evoking her rights under the Fourth, Fifth and Sixth Amendments of the Constitution.

In a statement released March 7, Manning wrote, “In solidarity with many activists facing the odds, I will stand by my principles… My legal team continues to challenge the secrecy of these proceedings, and I am prepared to face the consequences of my refusal.”

Spencer said she unequivocally condemns the jailing of Manning and believes Manning has taken a courageous and principled stance against war crimes of American imperialism.

One of the most prominent 2010 leaks is a video commonly referred to as “Collateral Murder,” which shows a U.S. Military helicopter gunning down 16 people, including two Reuters journalists, and severely injuring two children near Baghdad as pilots and gunners audibly joke and laugh about the war crimes and atrocities being committed, Spencer said.

Additional leaks include Hillary Clinton text messages with her campaign manager, Anthony Podesta, in which she reveals herself lying to voters about policies while assuring hedge fund managers in paid speeches that their interests would always remain aligned, Spencer said.

Clinton admitted to having two policy positions for each issue: her public position and her private position, she said.

Today, it is evident the Democratic Party has played a leading role in persecuting Manning and Assange, Spencer said, noting last year’s DNC lawsuit against WikiLeaks and Assange, alleging them to be co-conspirators with Russia and Trump to steal the 2016 elections.

Democrats are now mostly silent about and complicit in war escalations and massive increases in military spending, choosing instead to denunciate Russia and call trump a ‘Putin Puppet,’ she said.

“There is no evidence showing collusion between WikiLeaks and the Trump Administration or Russia,” Spencer said.

Notably, WikiLeaks—unlike most American major news publications, including CNN, which was recently exposed by the NYT for spreading an untrue story about anti-American-intervention Venezuelans, and NBC and MSNBC, which have been exposed by the Intercept for fabricating and spreading untrue stories regarding the Russia investigations and various critics of the Democratic Party—has never been forced to retract a story for factual errors, Spencer said.

Behind the attacks against whistleblowers like Manning are attacks against free speech, access to truthful information and the democratic rights of the working-class in general, Spencer said.

“Manning is a hero, and she needs our help right now,” Spencer said. “We as young people and part of the working class need to defend her and demand her release.”