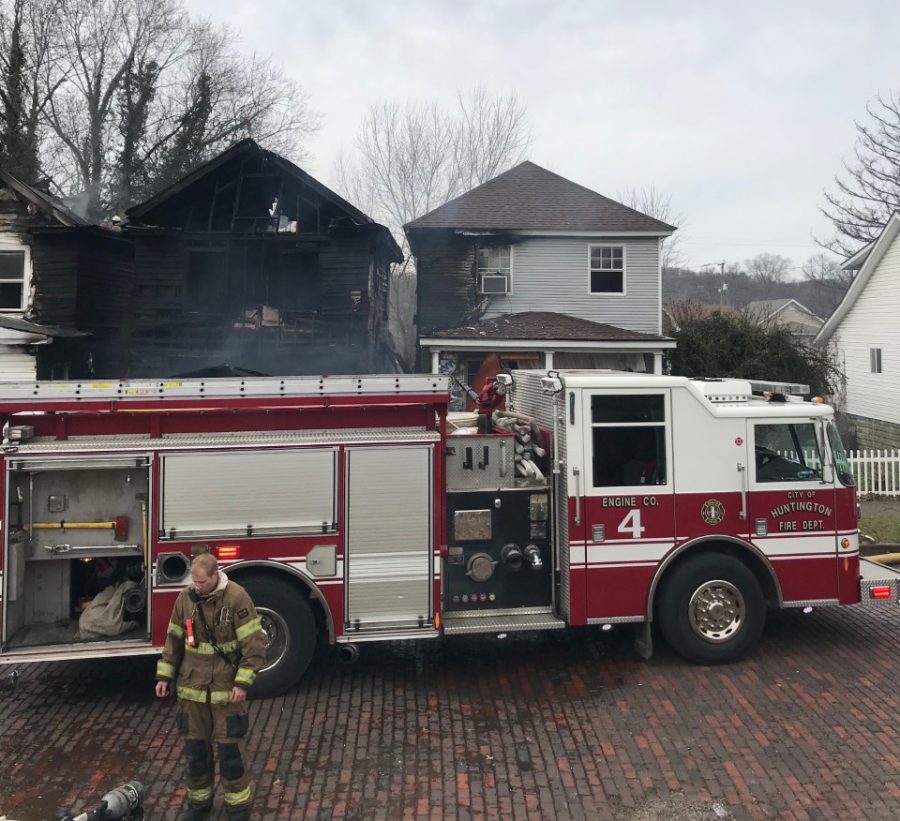 The fire damaged Chad Plumley’s home (right) on Sunday evening and destroyed his neighbors home (center), where it originated.

It’s the kindness of strangers that a Marshall student said affected her most after her dad lost his home to a fire March 10.

“Little girls brought us blankets…some guy who my dad said didn’t look like he had a lot took out his wallet and was like ‘Can I give you money?’” said Maizie Plumley, a senior anthropology major.

These were people that the Plumleys had either never met or never had a strong relationship with, she said.

Friends and neighbors jumped into action the night of the fire to help Chad Plumley, owner of the home, salvage what hadn’t been burned or suffered water damage, the daughter said.

“The outreach that we got was incredible. It was insane,” she said.

The daughter said three houses were involved in the fire: a vacant house, a next-door neighbor’s house and Plumley’s home. The middle house had been cooking with the window open when the kitchen caught fire and the fire spread to Plumley’s home.

The daughter said once they were able to enter her father’s home, they realized that they would be fine.

“I’ve never experienced a situation like this before so I didn’t know how people in Huntington could come together to help make a situation manageable,” she said.

A GoFundMe was set up the day following the fire by Bryan Chambers, a friend of the family, to help the father get back on his feet.

“Starting the GoFundMe was the easiest and quickest way I could do something to help him and his family,” Chambers said.

“I’m not the least bit surprised by the support he’s received, because he’s one of the most genuine, friendly and caring people I know,” Chambers said.

The Plumleys are trying to keep track of all who have helped out, but so many have offered a hand that it can be difficult to keep count, Maizie Plumley said.

“People are doing this out of the kindness of their hearts,” Maizie Plumley said. “They aren’t doing it because they feel like they should.”

Going forward, she said her family is going to try to form deeper relationships with those who have helped.

“The heart of these people is what matters,” Maizie Plumley said.

Makaylah Wheeler can be contacted at [email protected]