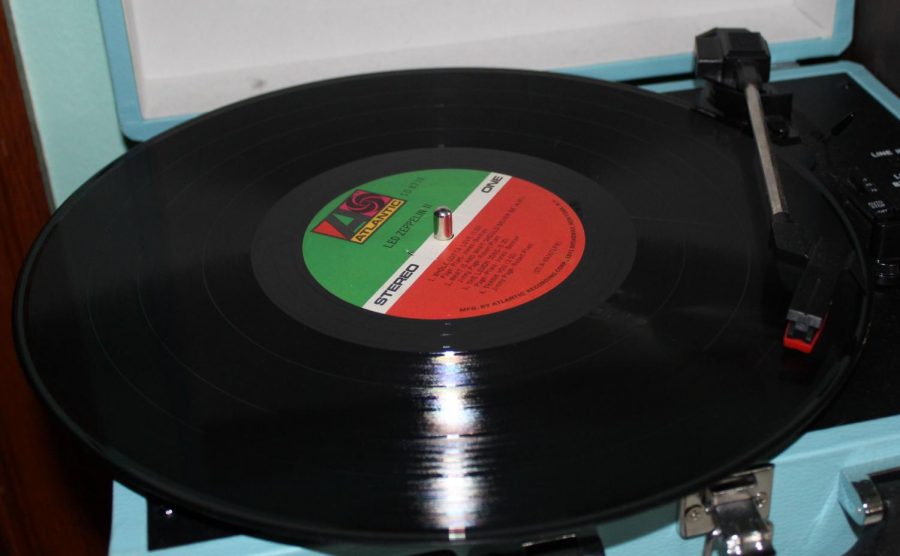 Amanda spins a vinyl record from her ever-expanding collection.

I’ve been collecting vinyl records since I was in seventh grade. It started when my appreciation for The Beatles exploded into full-on obsession. My parents had a respectable vinyl collection, which included a George Harrison solo album from the 80s. My memory is a little fuzzy, but I’m certain the first record I purchased was a vintage Beatles album from a favorite antique store in South Charleston.

Since then, my collection has grown, and the last time I counted, I had well over 100 records, varying with artist and genre. I’m proud to say I now own every Beatles studio album, but my obsession has sadly dwindled back into admiration. I have every Led Zeppelin and The Who album. I’ve got a lot of Fleetwood Mac (they’re my current obsession, which has lasted well over three years) and almost all of Stevie Nicks’s solo stuff. With a few Johnny Cash, Waylon Jennings and Dolly Parton thrown in for good measure, I have more than just rock and roll albums as well. It’s hard to find original pressings of 90s grunge albums because that’s when vinyl started to die and CDs became the standard, but I haven’t given up my search.

I’m really not meaning to brag here, (but if I was, you’d be impressed, right?) but I do want to share some tips and tricks for anyone interested in starting or expanding their own record collection. I know it may be tempting to begin with eBay or Amazon, but trust me, there’s no fun in that. Honestly, half the joy I get out of my collection has been from the hunt. Stop searching online and start looking at your friendly neighborhood antique and thrift stores; I guarantee you’ll find a lot more than you might think.

Don’t be skeptical; though I do have a few of my most prized records from online, most of my records are from places I frequent, like that South Charleston antique store. And let’s not forget that record stores are a thing as well. Though I’m unfamiliar with any in Huntington, I know there are a few in the Charleston area. These places are well organized and full of used (and new) records that need homes. Personally, I don’t listen to a lot of new music, because I’m obviously too cool and convinced I was born way too late, but newer artists are jumping on the vinyl bandwagon. Vinyl is absolutely making a comeback, and this is evident, especially, every April when Record Store Day comes back for another year. I promise any artist you listen to has an album on vinyl, and you’ll have fun looking for them. Some of my happiest moments have been spent in record stores.

We’ve established that vinyl records and places to get them are abundant, but what about record players? Well, many retail outlets such as Target, Books A Million and Walmart have record players, and many are very affordable. Some even come with other features, like Bluetooth and CD players. Plus, vinyl is easy to take care of, and you can buy cleaning kits for your records. Just be sure to store them vertically; be leery of laying them down, as this can damage the vinyl. I recommend getting a record crate or repurposing an old milk crate.

So what are you waiting for? Music was meant to be listened in its purest form, on vinyl, and it sounds better on a record player than anywhere else, besides maybe live. It’s not a terribly expensive hobby, and you automatically become cooler when you listen to vinyl. It’s true; I don’t make the rules.

And, by the way, the plural of vinyl is vinyl.