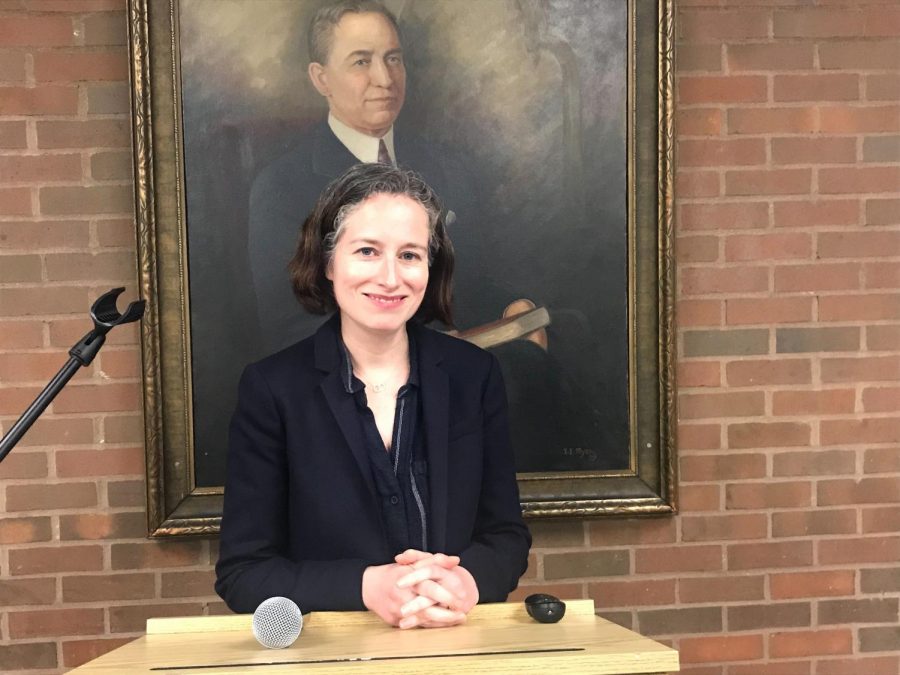 Author Ruth Franklin presented her feminist biography “Shirley Jackson: A Rather Haunted Life,” discussed her inspiration for the book and shared experiences of the six years it took to write Thursday, during an annual Charlotte Schmidlapp Distinguished Lecture in Women’s Studies.

One of Jackson’s most famous written works, the short story “The Lottery,” which was first published in The New Yorker in 1948, depicts a suspenseful tale of a lottery system with a dark twist at its conclusion. It was met with mixed reviews and responses, and Franklin said Jackson received negative mail from readers, but the story had deeper meanings for Jackson than what was on the surface.

“What’s clear, when you look closely in the way she talks about her own writing is how closely the aspect of her life, the aspect of being a woman, of being a woman with a woman’s preoccupations and problems, was bound up with her creative life when she talked about writing ‘The Lottery,’” Franklin said.

Franklin said the relative success of “The Lottery” was a major turning point in Jackson’s career and in her marriage. Franklin’s book focuses on the juxtaposition between Jackson’s home life and her career. She was expected to be a housewife, raising four kids, and she yet she found the time to write two memoirs, six novels and dozens of essays and short stories for various magazines.

“She wrote this essay for one of the women’s magazines that appears in her first memoir, ‘Life Among the Savages.’ She describes herself going to the hospital to give birth to her third child, and the clerk asks her to state her profession,” Franklin said. “And she says writer. The clerk says, ‘I’ll just put down housewife.’ And when I read that little nugget, I felt like that little anecdote encapsulated everything I wanted to know about Shirley Jackson.

“Their first child was born in late 1942, and amazingly, between 1943 and 1944, she published ten short stories in The New Yorker. And that shows you, number one, how incredibly productive and efficient a worker she was. But also, I think that having children sparked her imagination creatively. It was good for her as a writer.”

Franklin interviewed some of Jackson’s students and Jackson’s children as part of her research for the book, and she also spent time in the Library of Congress archives, studying primary sources, including letters, from Jackson and those closest to her, as well as fan mail.

“One of the most moving categories of documents that I came upon in her archive were all these letters, folders and folders of letters that she received from housewives,” Franklin said. “I came to think of them as the ‘I don’t know how she does it letters,’ because over and over these women who read her essays in women’s magazines would write to her and say, ‘I want to be a writer too (…) but I’m just so tired and don’t understand how you can manage it.’”

Jackson often wrote back to these women, suggesting, among other things, that they not spend so much time cleaning the house, Franklin said.

“But there also was a sadder answer, which is that she started taking amphetamines, as many women did at the time,” Franklin said. “She was initially prescribed them as a diet drug and found they also help with her productivity. And for much of the 50s and 60s, she was addicted to various types of prescription medication, amphetamines to help with her work and tranquilizers to bring her down.”

Franklin said she was first inspired to write a biography of Jackson after reading one of her stories of motherhood, but she wanted to create a feminist biography too, focusing on the issues Jackson faced as a woman and what was expected of her as a wife and mother, as well as a writer, in the 1950s.

“So, it was, in fact, always my intention to write a feminist biography,” Franklin said. “And I say that not because I impose some kind of outside feminist agenda on Shirley Jackson’s life and work, as one particular male reviewer accused me of doing. I didn’t do that. I did find that her life and work, the more I learned about it, fell quite neatly into a feminist framework. But my goal really was to resuscitate the memory of a woman writer who I believed had been unjustly neglected, not because of her talent but because the work she produced dealt so directly with women’s issues in a male oriented literary world, and if that’s my feminist agenda, so be it.”

Late in her life, Jackson suffered from obesity and agoraphobia, or fear of leaving the house, and she was also addicted to prescription medications, but Franklin said Jackson sought help and attempted to get better shortly before she died. Jackson also kept writing up until the end of her life, Franklin said.

“One thing that is particularly tragic about her death is that it took place when she was on the rebound,” Franklin said. “It’s often thought that Jackson kind of died a miserable death,as an agoraphobic, but that actually isn’t true. She sought therapy, and she was getting better in the last six months of her life. Her personal descent was matched by a kind of creative ascent. And we’ll never know what she might have been capable of had she been able to carry on just a little bit longer.”

After the lecture, Franklin answered questions from the audience. The lecture was part of Marshall University’s Women’s History Month Calendar, and the next event will be a Keynote in Women’s Leadership, at 5:30 p.m. March 19 in the Shawkey Dining Room.