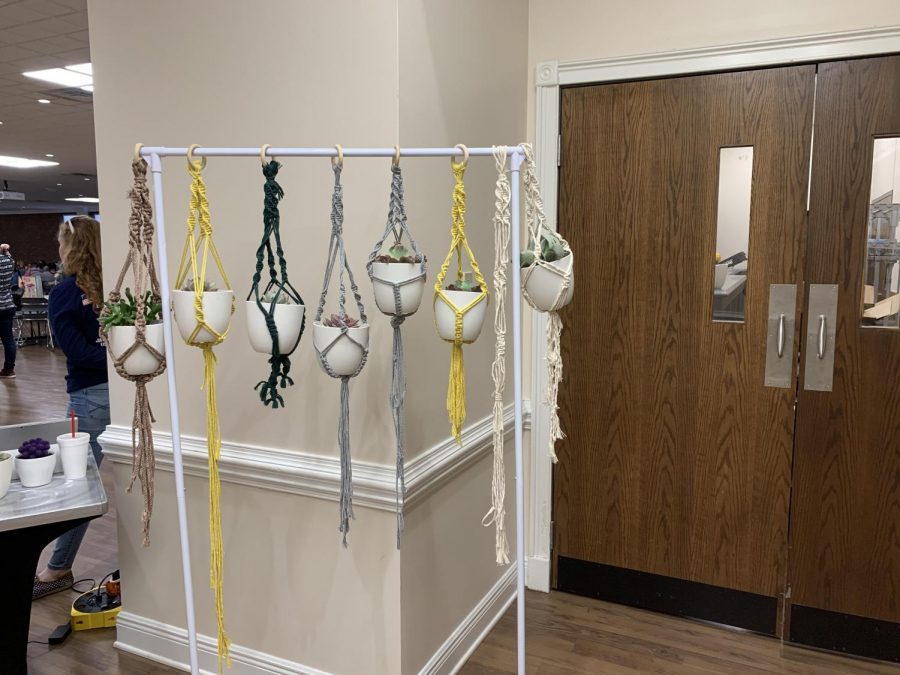 Marshall University students created macrame plant hangers Tuesday in the Memorial Student Center, during an event in the Do It Yourself series hosted by Marshall’s Campus Activities Board and Office of Student Activities.

“It’s kind of blown up,” Brittany Davis, a graduate assistant for the Office of Student Activities, said about the DIY series.

When the series began one year ago, it became an event students were attracted to, said Raul Moreno,CAB’s president. It was really popular, Moreno said.

Though students and CAB created a macrame plant hanging wall last year, Davis said this year they wanted to change things up to make the event shorter because it was too long in the past.

Because last year’s macrame plant hanging instructor was not available, Davis said she decided to instruct this event. With three months to prepare, Davis said, her boss sent her home with some string.

“I wanted the (design) to be easy enough that anyone can do it, but not just have regular knots,” Davis said. “It’s really cool because you get to learn a task that you’ll probably know for the rest of your life. You also get to take something home with you.”

Jordyn Stewart, a sophomore criminal justice major, said it is fun creating art and having something to show off. She said, not only does she enjoy being able to crochet and knit, but she liked the macrame plant hanging event because she likes having things to work with that she “couldn’t normally afford” on her own and the event also got her out of her apartment.

“We are trying to get students out of their rooms because you know a lot of students just go to class and go back to their rooms,” Moreno said. “We want student to be more open and meet more people and become more social. We are trying to get them to develop their social skills and also develop their creativity to keep them more interested on campus, rather than moving off campus.”

CAB and the Office of Student Activities still have upcoming events they think students would be interested in, Moreno said.

For next week, CAB and the Office of Student Activities have planned a paint and sip. They will also have a DIY bath bomb event in May. These events are free and are open to all students, Moreno said.