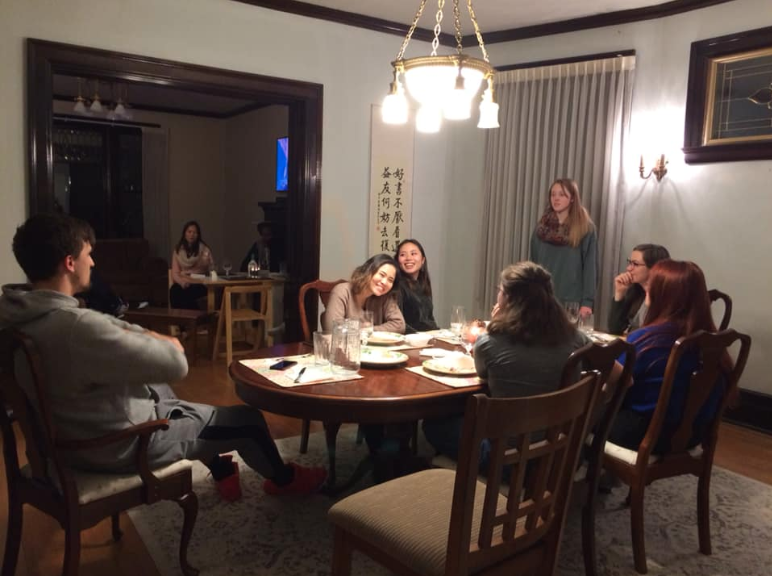 Gather around the table, it is time for an American dinner.

The Bridges International organization gives international students a chance to experience an American home dinner while talking about the Christian faith.

For many international students, getting the chance to experience an American home-cooked meal is a novelty,  said Katelyn Hannan, Bridges International staff member.

“Getting to be able to come to an American home and share their culture hits a lot of the things Bridges is about,” Hannan said. “A lot of students never get to go to an American home, which is kind of sad, and so we want to alleviate that through this.”

Grace Reed, a leadership member of Bridges and sophomore international affairs major, said the dinners give students a chance to explore the American culture and Christian faith in a safe environment.

“I think it is a place to ask questions and not feel pressured to have the right answers.” Reed said. “There is one girl who came up to me and said, ‘That is the first time I have ever prayed before, and I did not know if I was supposed to close my eyes or bow my head or say something afterwards, but I did not feel pressured to do that because I am allowed to learn here.’”

The weekly dinners have been a vision of Bridges for a while, Hannan said, but this semester it finally became a reality.

“Bridges has always wanted to do something weekly and consistent, and one of the ways that this movement got started was through weekly dinners because people come for food,” Hannan said. “This was just a fun time to hang out together and eat and share culture and do a discussion on faith after. We have been dreaming about this for probably a year now and then finally we had enough people that we thought we could get started.”

Hannan said the dinner, which is held at a Huntington community member’s house, is provided by the students, but she hopes at some point the group can cook together and learn about a new culture.

“I think the vision was more of people coming over early and we will make food together, but how it has looked so far is people bringing food and making it themselves,” Hannan said. “So, they can come to the house before if they want and then our vision would be for different cultures to have different food featured each time.”

Although the dinners are still a work in progress, Reed said it gives students a chance to experience culture outside of a classroom.

“I think it is a great opportunity to get off campus and do something that is not necessarily structured in a way that is like ‘meet in this classroom and do this thing,’” Reed said. “It is a lot more chill and a lot less strained. They are able to ask questions about the outside culture that is Marshall, Huntington, West Virginia or the United States. The dinners give students a chance to see these cultures in real time which you cannot do in a dorm.”

After dinner, students are invited to gather together to discuss faith, Hannan said.

“We have a little bit of a structure,” Hannan said. “It is called discovery groups which is something we are trying. It is simple, you pick a passage from the Bible and just read it together and then ask simple questions and then everyone shares their thoughts on it. It is made for people who are not Christian and for intercultural discussions.”

The next dinner will be Tuesday, March 19. For more information about Bridges and the dinners, those interested may visit Bridges International Marshall University Facebook page and Instagram @mubridgesinternational.

Meredith O’Bara can be contacted at [email protected]