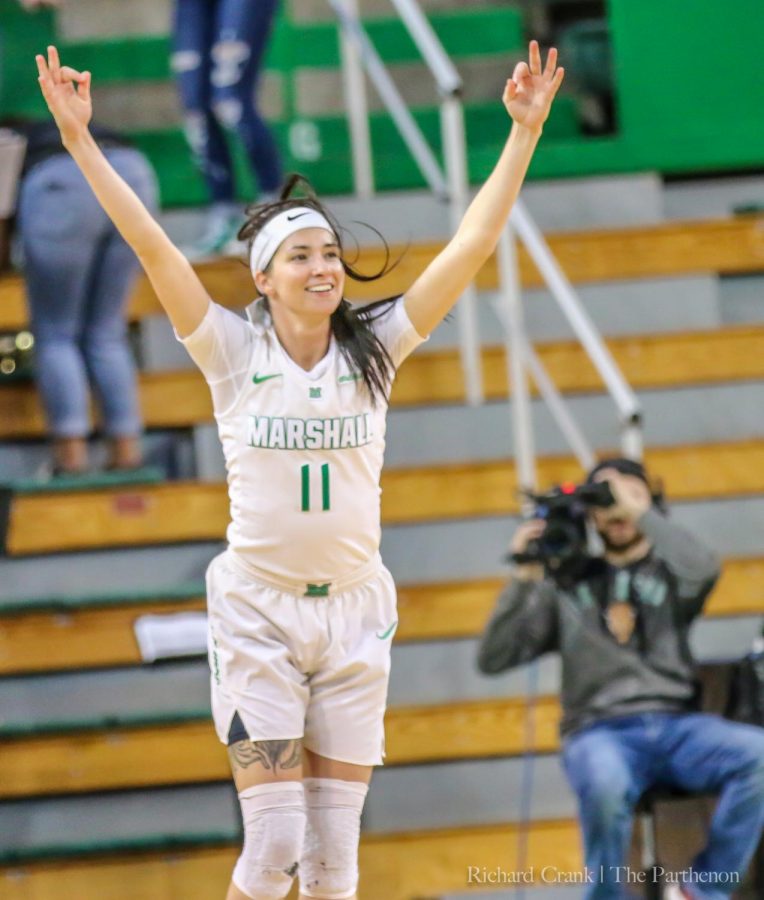 Marshall guard Taylor Porter (11) celebrates one of her 10 made 3-pointers during the Thundering Herd's win over FIU on Mar. 7, 2019 at the Cam Henderson Center.

“(Gore and Porter) went out with a blaze of glory,” women’s head coach Tony Kemper said. “They really like to play and love to compete. They like to win. They both brought tremendous crowds from Logan, West Virginia, Fort Gay, West Virginia, and Louisa, Kentucky.”

Marshall set new school records with 18 three-pointers in a game and 10 Conference USA wins. Gore became the third player in Marshall women’s basketball history with 2,000 career points and Porter broke Gore’s school record for most 3-pointers in a game with 10. The two senior guards combined for a total of 59 of Marshall’s 87 points.

The Herd finished off its regular season play with a 16-13 overall record and a 10-6 conference record. The Panthers dropped to 5-24 overall and 2-14 C-USA. FIU was also eliminated from conference tournament contention.

Four of the five seniors were in the starting lineup: Porter, Gore, Jovana Vucetic, and Tana Driver. Senior Logan Fraley made a late appearance. She decided not to play her senior season due to back issues.

“Our team played well,” Kemper said. “(We) played hard. I thought we did a better job on the glass. We made sure that we boxed out, held them to one shot, and we were off to the races.”

Porter ended with 30 points, seven rebounds and three assists. All of her points were from beyond the arc (10-for-12, 83 percent). Gore followed behind with 29 points (12-for-24, 50 percent) eight rebounds, and six assists. Redshirt junior forward Khadaijia Brooks added 11 points and 10 rebounds for her fourth double-double of the season. Sophomore guard Kristen Mayo had five points and sophomore forward Taylor Pearson had four points. Senior forward Jovana Vucetic and freshman guard Aeriel Adkins had three points each. Freshman guard Kia Sivils had two points.

“When you shoot it like we did, it’s pretty hard to hang in there on us,” Kemper said.

Freshman forward Ce’Nara Skanes finished with 10 points and 11 rebounds for Florida International. Junior guard Bre’Osha Scott had nine points, four rebounds and three assists. The team shot 30.5 percent (18-of-59) in field goals, 11.5 percent in three-pointers (3-for-26), and 50.0 percent in free throws (3-of-6).

The game got off to a slow start as the Panthers took an early 7-3 lead over the Herd but that didn’t last long. Marshall closed the opening quarter on a 19-1 run and never looked back.

Gore encouraged Porter to score her three-pointers as Gore struggled to make her own shots in the beginning. She thought she would go for assists rather than points at that time.

“It was a really good team effort,” Gore said. “I’m proud of everybody. It’s a good win to carry the momentum into Frisco next week.”

Porter said she continued to encourage Gore when the shots weren’t going in until they finally did by feeding her the ball until the shots went through the net.

“It was a great team effort, honestly,” Porter said. “The whole team worked together.”