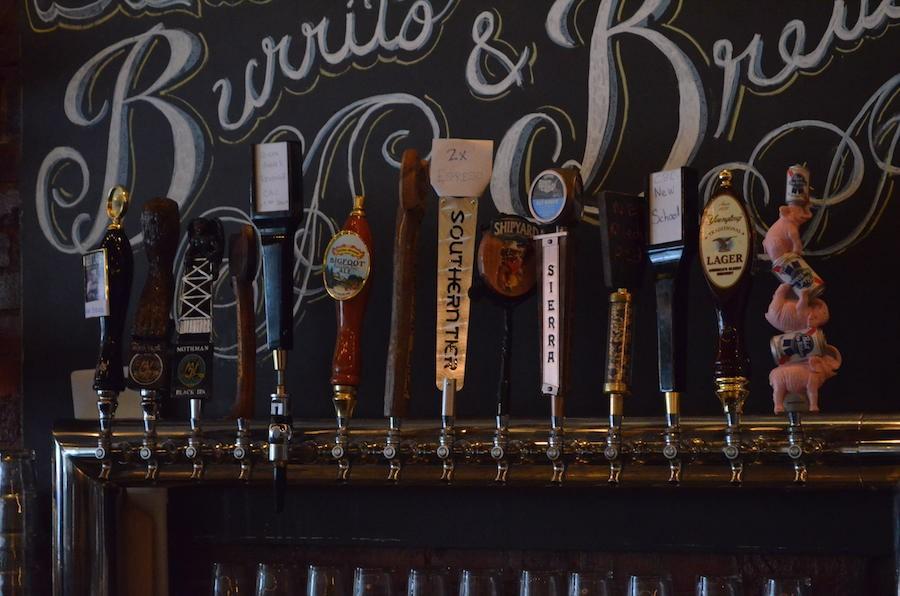 Black Sheep Burrito and Brews, located at 1555 Third Ave., offers a selection of 14 beers on tap.

The Charleston Brewing Company showcased 10 beers Monday at Black Sheep Burrito and Brews for a “Tap Take Over.”
Ryan Heastings, head brewer at Charleston Brewing Company, said Raj is their most popular beer.
“We make an IPA called the Raj, and it just blows everything out of the water,” Heastings said. “It’s probably 3 to 1. We have big tanks and small tanks, so we have to use all the big tanks for the Raj.”
According to the company’s website, the Raj is an interpretation of a West Coast-style India Pale Ale and it has flavors of more hop-derived pine and citrus.
Other craft brewing companies have a range of IPAs on the menu that have different flavors and aromas.
“It is definitely community driven, so there’s an element of brewing where you want to be creative, make beer that your passionate about,” Heastings said. “There’s also an element that we are in the service business so I need to make beer that people want. If I don’t, I won’t be a brewer for very long because if nobody drinks the beer…”
Alex Durand, Black Sheep Burrito and Brews of Huntington manager, invites local brewers to the restaurant to expand the minds of locals to craft beer.
“We try to bring them in to expand on education of the beers and how the process actually happens in order to hopefully expand people’s palette on the beer,” Durand said. “Also, to bring more of a personal relationship with the brewer and to get the brewer out of the brewery and meeting the people that enjoy their beer.”
Heastings said  to entice other members of the beer community to step away from big beer companies and try beers a little closer to home, there needs to be something for everyone.

“I think the biggest thing is to make a wide range of beer,” Heastings said. “I want there to be a beer on the board for everyone, so regardless of whether you like IPAs, really, really aggressive beer, or really you just like PBR or Natty Light and you’re just there because your friends are there, we want there to be a beer for you.”
Heastings said the flavors of beers the community wants to taste, changes from season to season.
He said it is important to be ahead of the game, thinking about the upcoming season and what flavors they are able to introduce.
“I think that so much of what we consume and what we buy is packaged and kind of commoditized and comes from big factories,” Heastings said. “It’s kind of nice to go back to the old school and have, like this guy is your butcher, this lady is your fishmonger and oh look there’s Ryan, he’s the brewer.”
Supporting small business within the state is an element that will boost the economic status of West Virginia.
The mention of craft breweries in Gov. Earl Ray Tomblin’s State of the State Address is promising for the economic development of the state through the craft beer industry.
“It was really, really cool that he mentioned craft brewery in his State of the State Address, and I think that even if it’s more symbolic than any thing else that were being seen as a positive influence in the state,” Heastings said. “People are seeing what we are doing as being an enhancement to daily life in West Virginia. Specifically what we’re working on now is making it a little bit easier for breweries in the state to operate.”
The new laws will make it easier for Breweries to operate and allow the breweries and local pubs to fill growlers for consumers to take the beer to-go for consumption at home.
For restaurants like Black Sheep, the distribution of growlers will allow them to sell a larger amount of beer.
Kelsie Lively can be contacted at [email protected]