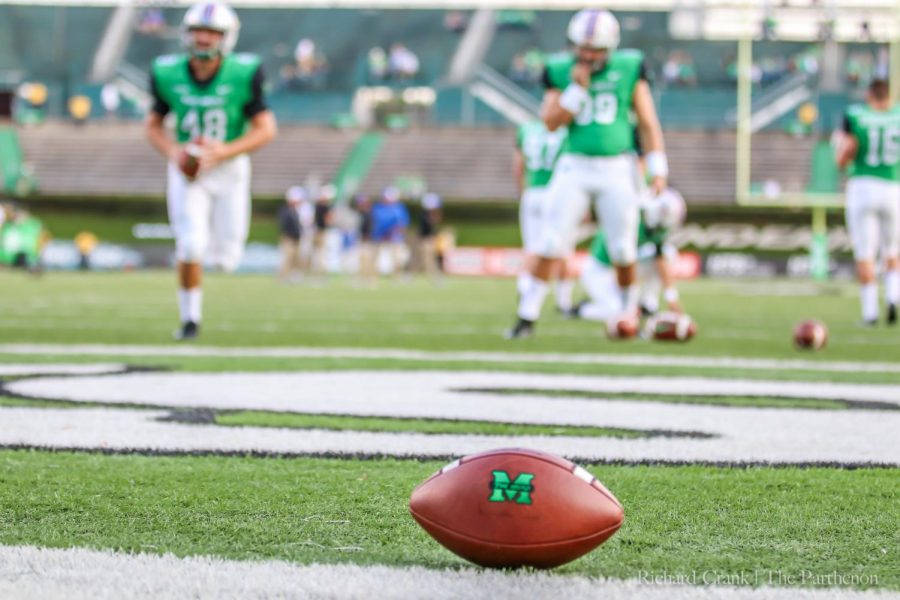 Prior to its game against Middle Tennessee, Marshall football specialists warm up in the background as a football remains in the end zone.

Marshall University Director of Athletics Mike Hamrick announced Monday that the Marshall football team will travel to the University of Notre Dame for the first time in school history.

Hamrick said that he is looking forward to a great atmosphere when the two teams meet. Marshall University’s athletic department will benefit financially when it meets in South Bend, Indiana.

“Notre Dame is one of the most prestigious programs in all of college football and a trip to South Bend, Indiana, should be on every fan’s bucket list,” Hamrick said.

Hamrick also said in the news release that the Marshall fan base has played a huge role in this new venture with the Fighting Irish.

“Notre Dame is very selective when it comes to football scheduling, but Marshall’s national brand, history and passionate fan base made us an appealing addition to their home schedule,” Hamrick said.

The Fighting Irish finished fifth in the Associated Press Poll including a 12-1 record and lost to the Clemson Tigers in the 2018 Goodyear Cotton Bowl Classic, 30-3, a game that would have sent Notre Dame to the national championship had it won.

The Herd finished 9-4 this past season and defeated the University of South Florida Bulls in the 2018 Bad Boy Mowers Gasparilla Bowl, 38-20. The Thundering Herd is preparing for its 2019 season with nonconference matchups consisting of VMI, Boise State, Ohio and Cincinnati.

The matchup with Notre Dame is currently the second known game on Marshall’s 2022 schedule. The Thundering Herd will play former Southern Conference foe Appalachian State at home one week after playing the Fighting Irish.

“We look forward to the trip and the opportunity to showcase our football program on national television and in one of the most iconic venues college football has to offer,” Hamrick said.

The game between the Thundering Herd and Fighting Irish will take place on Sept. 10, 2022 at Notre Dame Stadium.