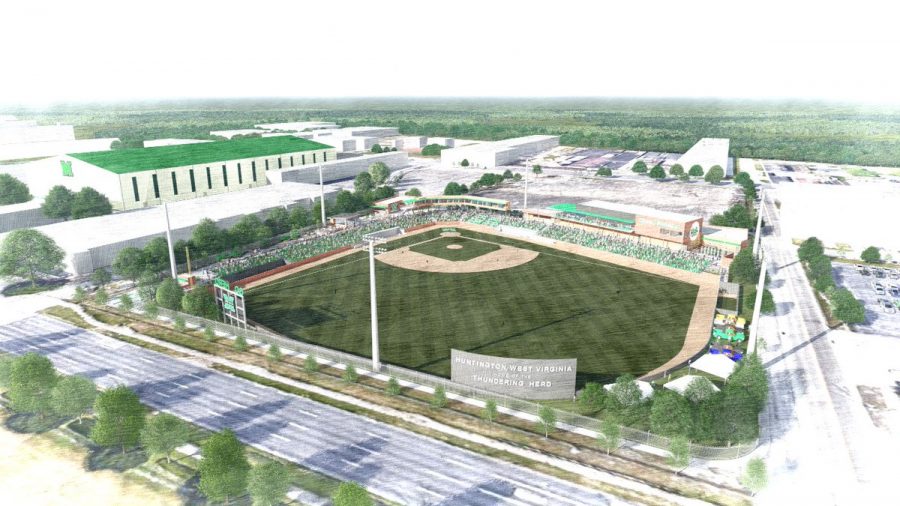 Renderings of Marshall baseball's future home, which will be located at 5th Avenue and 24th Street.

Fans of Marshall baseball have been hearing this phrase since the 1960s but during an unveiling ceremony on Thursday the words were spoken once more. Mayor Steve Williams announced that the Huntington Municipal Development Authority bought eight acres of property from Flint Pigments for $750,000 last Friday.

“What we are here to announce,” he said. “(President of Marshall University) Jerry Gilbert, we have bought these eight acres from Flint Pigments. It is time to build a baseball stadium.”

Marshall Director of Athletics Mike Hamrick said the goal is for Marshall to play baseball in the stadium by March 2021.

“You can see our vision of the stadium that will go on the plot of land behind me,” he said. “I have always said that a vision is a dream with a deadline. (The stadium) is the dream. The deadline is that come this November, we want to put this out to bid for someone to step up to build that stadium and to start that construction next March in 2020. It will take us 12 months to build that baseball stadium and we will play ball baseball in that stadium in March 2021.”

Similarly, Williams said that he believes in making no little plans.

“That is very ambitious,” he said. “I had the easy job we got the land. Now (Hamrick) has to raise 15-20 million dollars. That is the hard part.”

Hamrick said that the 3,500-seat stadium will be the best baseball stadium in the state of West Virginia and that it will be one of the top 20 baseball stadiums in the nation and in the region.

Marshall baseball has been looking for a home near campus since the 1960s and Hamrick said the stadium is a huge game changer for the Herd’s baseball program.

In 2017 the city of Huntington was awarded a prize of $3 million dollars for winning America’s Best Community Award for its work on a bold development plan to transform the city.

Hamrick said that part of that plan was to redevelop the Highlawn area and with the purchase of Flint Pigments is the first step to revitalizing the area.

Similarly, Williams said that this is huge for the city.

“This is huge for Huntington,” he said. “To have baseball in the city through the spring, summer and fall is huge for us.”

Hamrick said that the estimated cost of the stadium is between $18-20 million to do what the University wants to do.

“That is state of the art everything,” he said. “Offices, locker rooms, club areas, patios, you name it. We are going to make it a great fan-friendly facility.”

Talks between the City of Huntington and Marshall University about building a baseball stadium have been in the works since the 1960s. With the dream finally being able to come to reality with Williams, Gilbert and Hamrick working together to set the project in motion.

Williams said he never doubted it.

The stadium will be built alongside the old 24th Street that was re-named by Williams in a ceremony honoring legendary Marshall head baseball coach Jack Cook and his contributions to the baseball program. The street will be called Honorary Coach Jack Cook Way.

Cook said that he has been waiting for the baseball stadium since he began his coaching career at Marshall back in the 1960s and that he can’t say how much joy he has had coaching for Marshall.

“It’s really just been the love of my life,” he said. “I really loved the game. I just wanted to thank Mayor Williams, President Gilbert and (Hamrick) for all the things they have helped me with.”

Cook said that he thanks all the players that played for him and the contribution that they had for the game.

Millard Stickler can be contacted at [email protected]