UKirk reaches out through brews, conversation 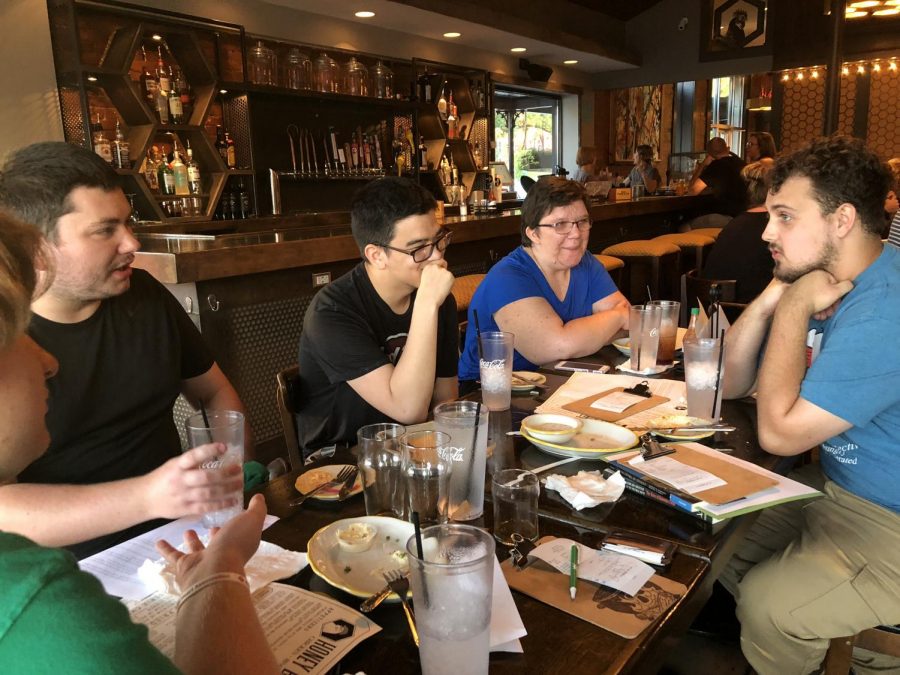 Students and community members dicuss theology at Honey Bones near campus for Stouts and Doubts.

Drinking beer and talking about faith is one strategy a campus ministry is using to unite those who might not be talking about religion.

UKirk is reaching out to students in a way that some individuals might call unconventional, but Chris Bailey, campus minister of the Presbyterian ministry, said UKirk is giving students a chance to take their doubts to a safe space.

“I think doubt is just as much a part of faith as anything,” Bailey said. “If you are not wrestling with your faith, or trying to protect it, it is really not a living thing.”

With two events, Stouts and Doubts and A-SLAY-ing-Grace, starting again this semester, UKirk, which means “University Church,” is hoping to offer safe spaces for students on campus to learn about their faith, Bailey said.

Stouts and Doubts was created to fill the need students might have missed in other campus organizations. The event, which is the third Thursday of each month at 5:30 p.m. at Honey Bones, invites students to have an alcoholic beverage while discussing faith.

“It is really intended to be an open discussion where people can feel welcome to come ask questions and be able to ask about stuff without any expectation of having any theological background,” Bailey said. “So, it is really just a place to ask questions, check us out, and then also if someone has been burned by the church before, it is intended to be a place where you can have a safe space to work through that.”

John Ross, a junior philosophy major and member of UKirk, said he believes this event is part of the movement to make the church more honest, open and transparent.

“The events are opportunities to explore Christianity critically,” Ross said. “The church has truly hurt a lot of people, and yet at the same time, the church has truly uplifted and helped a lot of people. Exploring nuances like that are important for Christians in the 21st century to talk about. It’s part of a move to be a church that is more honest, open and transparent.”

Ross said this group gives students a chance to look optimistically to the future for a spiritual life.

“I am queer and Christian,” Ross said. “Many of us were raised in faith traditions that were not accepting of queer folks. UKirk’s events provide a space to both process the hardships of those past traumatic experiences of being demonized but also look optimistically to the future for what a spiritual life can look like as queer college students in West Virginia.”

The event focuses around discussions and meeting the needs of students, Bailey said.

“It is mostly open discussion,” Bailey said. “I want it to be matching the needs of the students, so if a student comes in with a particular need that we can address, then we will.”

UKirk offers more than these two events. The organization has been on campus since the 1980s and has changed a lot over the years, Bailey said.

“We meet every Tuesday evening at 9 p.m.,” Bailey said. “We have fellowship opportunities, snacks and games. We do, depending on the mood of the group, an in-depth bible study or worship services, usually involving communion.”

Ross said the organization is casual, inviting and open to anyone.

“People are busy with classes and work, so I’d encourage folks to know that UKirk can be a place to just ‘stop in,’” Ross said. “We don’t have altar calls or pressure anyone to make life commitments to attending every single meeting. UKirk is casual, open and inviting. The only dangerous thing about it is you may end up liking it.”

Meredith O’Bara can be contacted by [email protected]