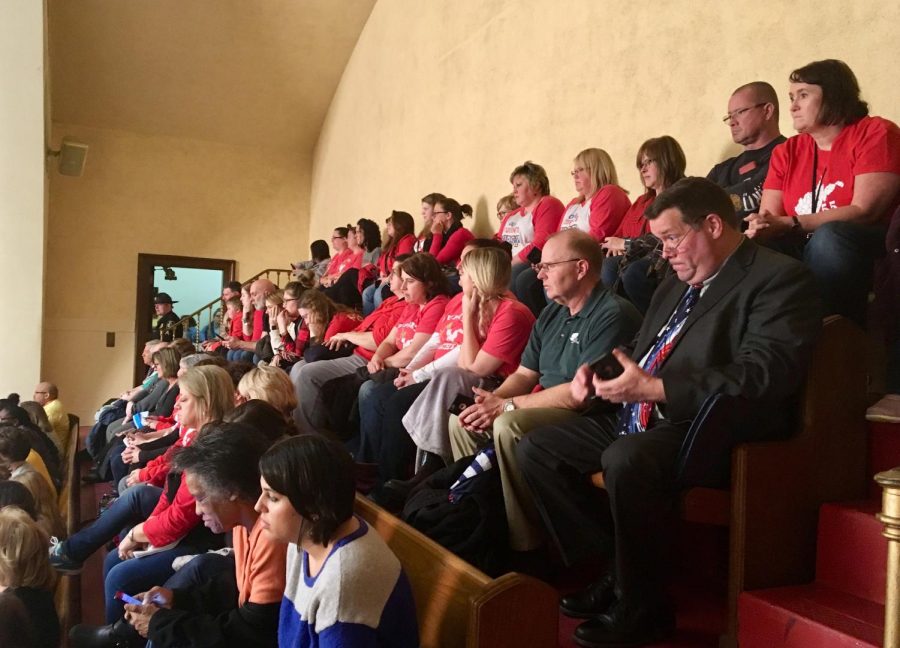 Dozens of citizens attended the morning and evening hearings, a majority of them, including teachers, students and other public education employees and union members, voicing their disapproval of the education bill, Senate Bill 451, and its likely impacts on West Virginia public education.

“The teacher pay raises were tied into a piece of legislation with a lot of other aspects that would be harmful to public education,” said Rep. Sean Hornbuckle, the lawmaker who led the push for a more accessible public hearing on the education bill.

Hornbuckle, a Democrat representing House District 16, which includes the Huntington area and parts of Cabell, Mason, Putnam, Lincoln and Wayne counties, said he started the motion to change the time of the public hearing on Monday from 8 a.m. to 5 p.m. to ensure more citizens could attend and voice their opinions. He said his initial proposal was denied by other lawmakers but amended to allow two separate meetings, one in the morning and one in the evening.

“I find it awfully hard to believe that someone would want to have just one meeting at that time [in the morning] if they truly wanted to hear from folks,” Hornbuckle said.

Some of the provisions within the bill that were opposed by unions and concerned citizens involve expanding permissions of charter schools and education savings accounts and the changing of rules regarding seniority and the difficulty of dismissing administrators.

“The bill contains so many bad provisions that teachers believe these measures negate the benefit of the pay raise,” said Don Scalise, a Cabell County high school teacher.

Charter schools are problematic because they are publicly funded but privately run, he said.

“Charter schools are exempt from state laws and policies, which allows them to set their own standards, curriculum and firing and hiring standards,” Scalise said.

This dynamic of charter schools allows them to turn away students who do not meet certain standards, whereas public schools educate everyone, he said.

“A citizen has every right to send their child to a private school or to a home school,” Scalise said. “However, that does not mean a person should be able to use funding specifically designated for public schools.”

Disapproval of charter schools is a sentiment felt not only by supporters of unions but by most constituents who have made their voices heard, Hornbuckle said.

Hornbuckle said charter schools end up drawing resources away from public schools, eventually resulting in a shortage of sufficient teachers and students, “so it’s actually a middle-class jobs issue as well.”

Hornbuckle said the necessity for public education reform seems to be a shared value of most West Virginians, including himself, because the wellbeing of public schools impacts everyone in the state. He said Senate Bill 451 would be mostly harmful for public education.

“Taking money out of the public education system, as opposed to fixing its problems, is just irresponsible,” Hornbuckle said. “Stripping resources from public education is another way of widening the gap between the haves and the have nots.”

Innovation zones, one possible alternative to charter schools, have been used in Cabell County in the past and allow schools to experiment with public education policies, while not breaking any laws or policies, both Hornbuckle and Scalise said.

“I believe most teachers would approve of the idea of expanding this program,” Scalise said.

While, over the weekend, unions representing local public sector workers voted “overwhelmingly” to authorize a statewide action if necessary, Scalise said a repeat of last year’s strikes is unlikely due to the House of Delegates already significantly altering most of the unpopular provisions within the bill.

“Most West Virginians understand what this bill really sought to do—punish teachers for last year’s strike,” Scalise said. “Senate President Mitch Carmichael and Senate GOP leadership created a bill no one asked for and no one outside his caucus approved.”

Scalise said all West Virginians should care about Senate Bill 451 because, in West Virginia, schools are much more than simple learning institutions.

“In many towns, schools have become community institutions that citizens and students can rally behind when events occur there,” Scalise said. “Smaller, localized schools lead to stronger communities, so educators believe that all citizens have a vested interest in the success of their schools.”