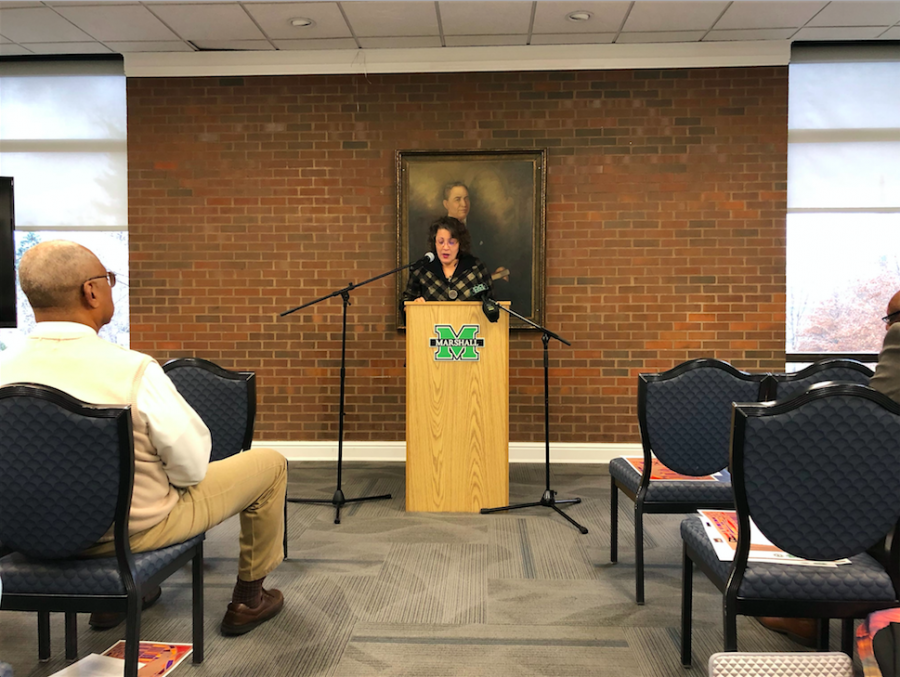 Africans and people of African descent have shaped American culture in several ways over the last 400 years, an author and history professor said Thursday in Marshall University’s Memorial Student Center.

“Beginning in 1619, with the arrival of the quote ‘20 and odd negroes’ aboard the English ship White Lion, people of African descent became a permanent cultural and political fixture in the American colonies and in the nation,” said Cassandra Newby-Alexander, dean of the College of Liberal Arts, professor of history and director of the Joseph Jenkins Roberts Center for African Diaspora Studies at Norfolk State University, while giving a Carter G. Woodson Lecture.

Newby-Alexander, who has published several books and articles on historical topics, said the first generation of Africans to come to North America were brought to the country in 1619 on two English privateer ships, named the White Lion and the Treasurer, which intercepted another ship and took 60 members of its “human cargo.”

Newby-Alexander said these early Africans, whom were brought to the Virginia colony, came primarily from the Ndongo Kingdom, which was part of what is now Angola. As time passed, individuals from other areas of Africa, such as the Bight of Biafra and the Kingdom of Kongo, also came to America, bringing their culture with them.

Africans and people of African descent influenced the style and design of some of America’s architecture, possessed the knowledge and skills required to make trading by boat a viable option in America and changed the way Europeans settled in America ate, through their control of food production and the emergence of southern cuisine, Newby-Alexander said.

An early example of this can be found in the 17th century, when Africans used multiple freedom suits to oppose a 1661 law that said new Africans entering America would be enslaved. She said Africans argued they were Christians, and therefore could not be enslaved, though English courts refused to see them as Christians, saying only English people or Europeans could be Christians, because Christians were white.

Over the last 400 years, people of African descent experienced “continual and inheritable bondage, family separation” and “in some cases, torture, segregation, legal abuse, economic exploitation and even murder,” Newby-Alexander said.

“Yet, they endured and became agents of their eventual liberation, whether it was through fighting in all of America’s wars, through the Underground Railroad, through the court system, on the streets protesting for equal treatment, in the halls of Congress and even in the White House,” Newby-Alexander said. “Indeed, this is a story about black agency that helped America define its understanding and definition of freedom and equality. This is the story which has inspired others in their quest for freedom and equality, and it has become a defining characteristic in America’s narrative of its promise.”

Newby-Alexander said what she hoped people would take away from her lecture was that an important moment in America’s history has to be seen through the lens of the presence of Africans and how that impacted the emerging culture of America in “powerful ways.”

Burnis Morris, professor of journalism and mass communications and director of the Dr. Carter G. Woodson Lyceum, said he thought individuals who attended the event should have learned, from the lecture, the significance of the early Africans who came to America, the English who came and how the nation developed from many of the interactions of Africans and other people in the beginning of the country.

Morris said he decided to have Newby-Alexander as a speaker after her saw her on C-Span, discussing Jamestown and the early Africans who settled in the colony during that period, and thought she did a “terrific job.”

Following the lecture, during closing remarks made by Montserrat Miller, history professor and executive director of Marshall’s Drinko Academy, Miller presented Newby-Alexander with an award. A reception sponsored by Drinko Academy also followed the event.

Jesten Richardson can be contacted at [email protected]