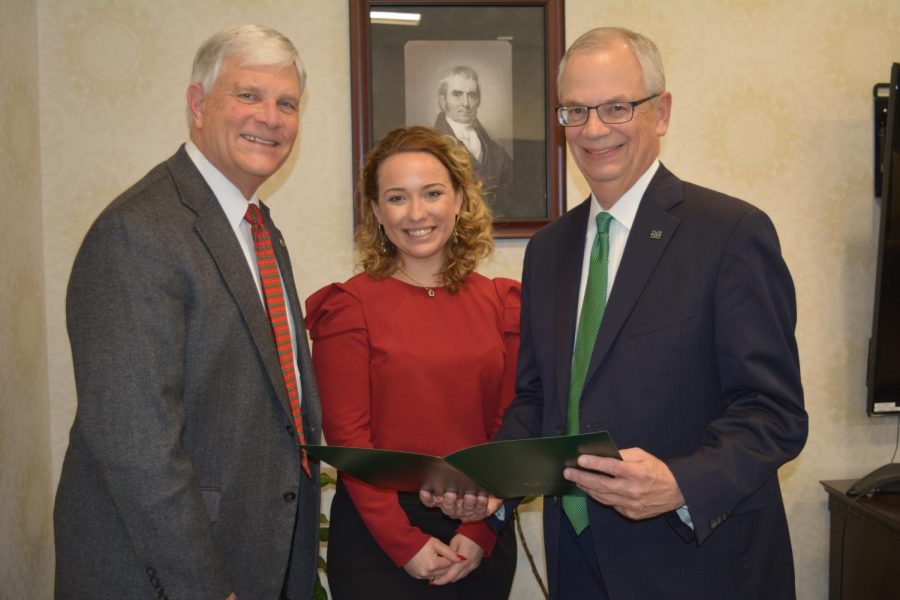 Marshall University President Jerry Gilbert established a new scholarship in memory of his parents to provide students in need with opportunities for a more educated life without accruing more student debt.

“I’d been thinking about what to do to honor my parents and I thought establishing an endowed scholarship that would last forever would be a great way to memorialize the two of them,” Gilbert said. “I knew that scholarships were one of our biggest needs, particularly need-based scholarships. I hope they get the support to make a difference so that they can attend Marshall and not have so much debt when they leave.”

The Tommy and Elizabeth Gilbert Scholarship will be a need-based scholarship for students and applicants who require financial assistance to attend Marshall, according to the standards of the Office of Student Financial Assistance.

Pamela Palermo, a student financial aide who began working at Marshall in September 2018, explained that need-based scholarships are awarded after financial aides look through FAFSAs each year, even if students are not eligible for Pell Grants, and this is the time of year when scholarships are being submitted and reviewed.

“Just because someone might not be eligible for a Pell Grant, that doesn’t mean there’s no need for financial aid,” Palermo said. “This is the time that companies are starting to notify schools, institutions out there on websites because they have funds available and they want to make them available to others.”

She also said she believes Gilbert’s scholarship was a demonstration of his passion for Marshall and its students.

“Dr. Gilbert is very passionate about Marshall, and it’s a really great dynamic to see,” Palermo said. “Watching his relationship with the students and the interaction is great.”

The scholarship will be available for residents of West Virginia first, then applicants from Kentucky, Arkansas, Mississippi and Ohio will be considered. Gilbert said he wanted to include outside states to tie Marshall to the states where his family had previously lived.

With his father passing away in 1977 and his mother passing in January 2018, Gilbert said he had been thinking of different ways to honor his parents in recent months.

“Although they didn’t have any connections to West Virginia, my mother did come up to West Virginia when I was installed as president,” Gilbert said. “She got to see Huntington, and she really liked Marshall. She followed the sports of Marshall for her last two and a half years of life so she was a real fan, and I thought it was appropriate.”

He also said the scholarship would be in connection with the recently developed Family Campaign, to fundraise through the next few years in order to find financial support for Marshall.

“I’ve been thinking about it for about six months or so, and we just launched the family campaign at Marshall, a fundraising campaign,” Gilbert said. “I wanted to do that this year so that it would be part of that campaign. And I thought it was a neat way to give back to Marshall and memorialize my parents.”