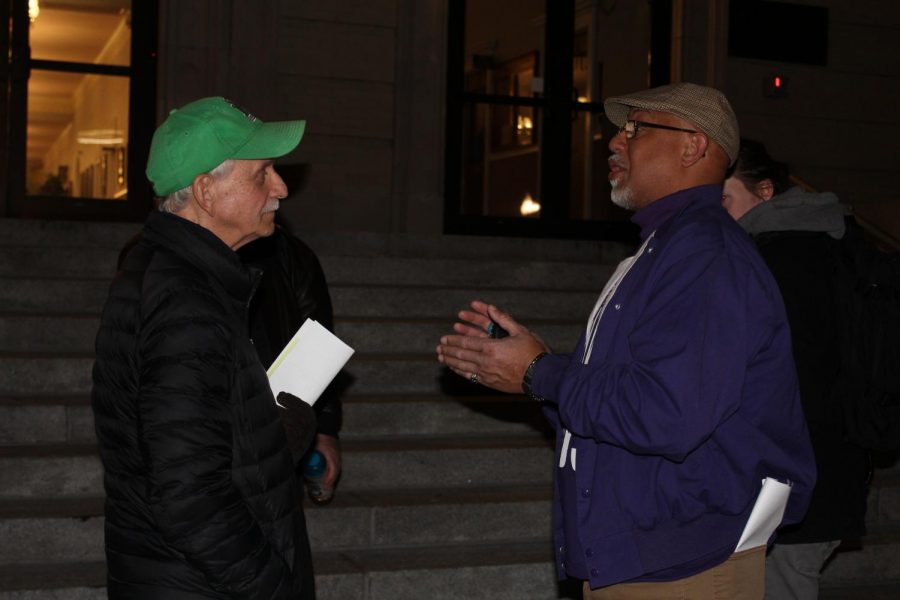 Huntington resident Mark Connelly talks with Damon Core, an executive board member of SEIU 1199, about the hospital board deal ordinance outside the Huntington City Council meeting.

Despite being met by a “Stop the Sell Out” rally, Huntington City Council voted 8-3 Monday, Jan. 28, to accept an ordinance giving up the city’s right to appoint three members to the Cabell Huntington Hospital Board of Directors in exchange for $1 million for general city funds.

Members of Service Employees International District 1199, which represents workers of Cabell Huntington Hospital and workers fighting for the right to unionize at St. Mary’s Hospital, and other concerned residents showed up at city hall an hour before the start of the meeting to make their voices heard.

When council members’ voting records show they ignore the voices of union workers and their residents, Core said, constituents will remember whose voices to ignore in the next elections.

“The people hired you; we can fire you too,” Core said, “And that goes for Mayor Williams as well.”

This was a sentiment Leif Olson, a graduate student of Marshall University’s public health program, said he shared with Core and several other residents.

He said voters will remember during the next elections which council members voted to approve and which ones voted to reject the ordinance.

“The members of the board should have a personal stake in the quality of our hospitals,” Olson said.

The deal in the approved ordinance, Olson said, only serves to take away power from local elected officials, residents and constituents, likely, to transfer that power to wealthy people from other states who may not always consider the best interests of Huntington and its people.

“Healthcare is not about making money,” Olson said. “It’s about treating people and their problems. Healthcare is a human right, and we will defend it at all times.”

As the final votes on the ordinance were cast and the council began a 5-minute recess period, several residents who attended the meeting began filing out the two exit doors of the chamber, chanting, “Vote them out. Vote them out.”